These decorative tiles are intended to surround water pools, and cost the same amount. What I've posted here is somewhat unfinished as a proof of concept. I got the idea when I saw the sand tiles and wanted to make a beach.

Bast, if you like this idea, I can crop and make all the individual files for each tile type, and transparent versions that can go on top of any terrain type.

I recreated my own versions of the animated water pool, martian dirt, and sand for this concept, if you post the original files, I can make "the shores" match up exactly with those. 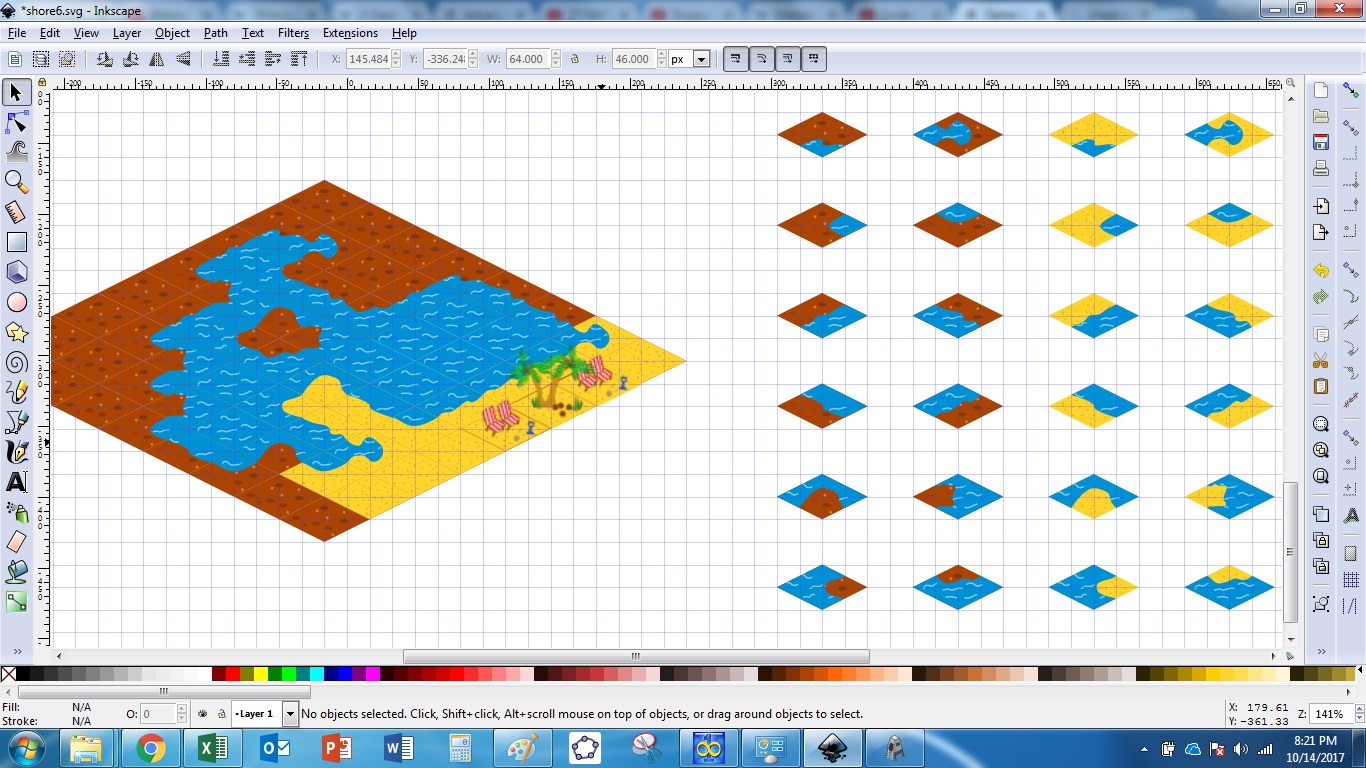 Amorphus
Member
Posts: 553
59
0
5y
#2
Wowz, that was a good idea to draw those. I built a beach on one of my red planets and I wanted something like this. The one problem that I see is what you mentioned, people will want to put these on every type of planet, not just red planet, so like you said, they would need to be transparent.

If bast adds these, I would suggest adding things like piers, bridges, umbrella chairs, beach volleyball courts, marinas, and several buildings that could only be built on top of water pools. Then maybe bast could add a boat vehicle that could only move over water and builds things out in the middle of the water. If you could make drawings of the ideas that I mentioned and present them(if you think those things should be added), I would be very appreciative.

colbya
Member
Posts: 1102
28
0
5y
#3
wile it would be nice it would also bring chaos to the building minus .
Just how many tiles is that ?
Would definitely case clutter how about this bast if you add tiles that go into a group such as these program the game so ONLY one tile shows on the build minu and then using the tab key would rotate through all available tiles of that type then click confirm .
Like so choise the displayed tile from teh building bar - minu
the builder window pops up like normal then use tab key rotates through said tiles until you see the desired tile and click confirm .

One other thing if these tiles were a prim only thing just make corner tiles be able to rotate this would reduce the number of tiles needed . From his concept .

FearTheGuppy
Member
Posts: 104
0
0
5y
#4
It's a great idea but there can be struggles with it as well, For every planet, it would mean that you would have to update existing colonies which could be a struggle. But all in all its a great idea!

Amorphus
Member
Posts: 553
59
0
5y
#5
Yeah, I think that's what adam was thinking though. he was just creating the textures for each tile from every angle, I don't think he had it in mind for each of these images to be a separate build option. Only bast has the ability to add these in and combine them into rotatable tiles.

builderbot
Member
Posts: 251
3
0
5y
#6
cool your idea that I would add well to the building of decorations that one aspet of sand could better decorate our colony! and how much do you fix the price of the shores?

Amorphus
Member
Posts: 553
59
0
5y
#7
By the way, make sure to post another thread with this content with a poll for this. Polls help bast to determine if the community would like your idea put in the game or not.

dominusprime
Member
Posts: 43
0
0
5y
#8
I love the idea im big on adding bodies of water and it would go great with some preexisting decorations. I also think a fishing boat would be a good idea to add in with this. And as far as resource costs to build shorelines I think half the amount of water and half of sand would provide a balanced and fair cost to build. And there should be a poll for this.