RE:Dessert World
I think a Desert world is coming with the Reptilian species.

Endy
4y ago
RE:Helium on the red planet?
Can you import Regolith and then build the Helium 3 Extractor?

Endy
4y ago
RE:Moon aluminum?
Need to import it or build an aluminum generator when you're able.

Endy
4y ago
RE:Introducing the Imperial Trade Representative - Page 2
Seems like even legit trades within the cap are disappearing though. May be a bug.

Endy
4y ago
RE:Mecha(Zero Population Colony)
Got these bad boys built and they now handle the bulk of the colony's energy demands.

Right now want to race to the finish line. Going to focus on research and further renovating the colony.

Possible to produce Triantanium and Ant Paste without workers, but not sure it would be efficient to do so.

Endy
4y ago
RE:Galactic board of trade bug
@Wiffal were you buying gold or selling?

Endy
4y ago
RE:Taxes
I think fee is less in offline mode.

Endy
4y ago
RE:About My Colony v0.50.0
Can't wait to see what Ancient Alien structures Zolarg will have.

Endy
4y ago
Small Statistics bugs
Having a zero population can cause several of the statistics to return NaN or Infinity.

Percent unemployed and GDP per capita.

Would limiting the number of offers a colony can post (server side), be possible as well?

Even something high(hundreds range) would help against people spamming thousands.

BLARG said:I had a 0 population colony once, but these get kicked from the server very quickly. Have at least 3 colonists to prevent that!

It's happened a few times now. Figured out if I cycle it offline/online, it comes back okay. Only need to kick from my main and it is Independent again. 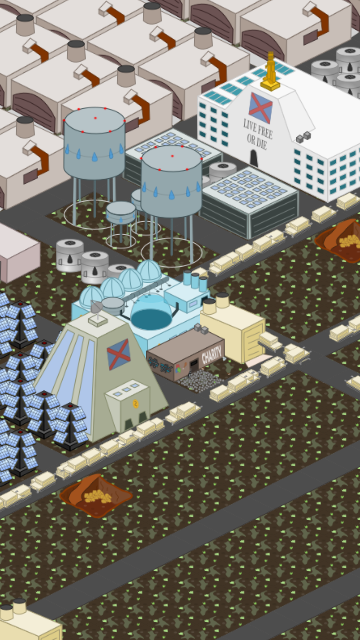 Got a Hydrogen reactor built. Panning on switching to Power Towers, but makes a good transitional source.

Also have a couple Alien Condensers now. Need the water for my clay and trees :)

Been doing good on the market. Cash has been going towards importing a small mountain of finished goods from folks. Working out okay.

Endy
4y ago
RE:lower the price of the aluminum generator (vote)
Trading and donations are options too. Part the fun is in the interactions.

If you want to, send a message here: eDu00zvq and I'll send you some.

Endy
4y ago
RE:What Version Are You On?
Lstest version, mobile. A few back on the PC.

Maybe blast a message to everyone?

Careful with the stargate. People might come through! And immediately be crushed by the atmosphere.

Started building up Trash too. Another one that doesn't require a population. Trying to go all out here.

In other news, built an Independence Hall so I can set policy. Do wish I could generate Civics. Only resource I need people(temporarily) for.

Amorphus said:Yeah i like to use as many of those as possible to keep population low at start. Especially works well on rego worlds

Yeah, had something of that in mind. The long rows of buildings happily producing on their lonesome.


Here you go. Comes up oddly.

Endy
4y ago
RE:Mecha(Zero Population Colony)
Several like the Transmitters and wells require none. Others like the Ore Refineries and Tree Farms, still produce smaller amounts even if no workers are present.

Not one colonist on the map :)

Endy
4y ago
Mecha(Zero Population Colony)
An oddball colony I've been working on. Small number of buildings don't require population to function. Thought it'd be fun to see if an independent colony was possible with them.

Kept a small population just long enough so I could gain the Civics needed to open up regular trading and unlock the Transmitter for research points.

Started with LIS to have access to the black market for an early source of Microchips and Aluminum. Colony is at the point I can regularly trade now, selling mostly gold and wood.

Star Gate is my next major goal, interestingly it provides research points as well. After that is turning the planet into a high atmosphere Hell World safe only for the Bots!

Endy
4y ago
RE:A way to destroy overwhelming and encroaching amounts of sugar cane, trees, and green crystalline.
Yeah, click and drag tool would be awesome. Could use the same code expand on multiple buildings being placed.

Member
Member Since
October 26th, 2017
Welcome
Ape Apps, LLC is an independent software development company founded in 2010 by Brandon Stecklein. Over the years, Ape Apps has published over 400 apps and games across various platforms. You can get in touch with Brandon on Twitter or by leaving a post on his wall @bastecklein
Ape Apps
•Ape Market
•Ape Web Apps
•Soundboard City
•BackgroundBag
•Mad About Memes
•Ape Apps Store
•Ape Designs
•Official Discord Server
App of the Day