Statistics
What do the numbers on the statistics page for resources mean?

It has never really mattered before as long as the top number is higher. :) But I'd like to know, for example, how to calculate easily how long it'll take me in game time to get from X of a resource to Y of that resource. Kind of like how an individual building will tell you how much per minute it's producing: how much per minute are ALL of them producing?

Hairball
3y ago
RE:Suggestion for Battery Pack
Could do the same with any kind of power generator. Coal, oil, etc. that you don't use for daily power generation.

Hairball
4y ago
RE:Suggestion for Battery Pack
I have some garbage stored up and then if I run out of power temporarily I click an incinerator and "activate all". Then when more power structures are built I turn the incinerators back of "deactivate all". Seems to work. But usually I just check before building if I'm gonna have enough power and build more power first.

Hairball
4y ago
RE:.47 day night bug on bugs ice world . LOL
I like the day/night cycle but on my screen on an ice world it's very hard to see anything when I'm outside (too much glare) even with my phone at the brightest. I also tried turning it off but Ice world is always pretty dark (by design, I know, which is why solar power ain't a thing there) so it doesn't help. Of course the lights you can build do help a lot, so I'm not sure I'd even turn it off if I had a way.

Hairball
4y ago
RE:Autosave when the app loses focus
Thanks. :)

Hairball
4y ago
RE:Autosave when the app loses focus
The game doesn't run in the background. And I am ok with that. But if I'm playing and I switch to another app (say, got example, I get a phone call) I'd just like it to save so that whenever I do come back everything is how it was when I stopped playing. :).

Hairball
4y ago
RE:Autosave when the app loses focus
Yes but a few lines of code could get that down to zero clicks. :). I don't always remember to save first.

Hairball
4y ago
Autosave when the app loses focus
Can we make it autosave when the app loses focus? I frequently am playing and I'll switch to another app for a while and when I come back I've lost the last few things I did because Android closed the app before it saved. I'm on Android Oreo which apparently is more aggressive about killing background apps. I know there's a setting I can change to tell Android not to kill MyColony but still a save would help those who don't know about that setting. :)

Hairball
4y ago
RE:Horrendous Lag while harvesting Crystalline
The map I'm having this issue with is not offline. But I'm on the Android version, I can probably get you the backup file?

Hairball
4y ago
RE:Horrendous Lag while harvesting Crystalline
I am having the same issue. The game runs fine with all my other bots doing their thing but the moment I try to harvest crystalline, I get really bad lag. For me it's only when I set two or three bots to harvest. Note: I have a large patch of synthetic crystalline that was taking over the map so there's a wall around it and I have a few "doors" in the wall (sections that are road instead of wall) so they can get in.

Hairball
4y ago
RE:Trading trash Gifting trash - Page 2
Colbya, even when you build the landfill since it's made entirely of trash and is meant to be a way to get rid of trash it will decay over time and disappear.

Hairball
4y ago
RE:UI Feedback - Page 2
I think maybe having a way to turn individual resources on/off in the list. Like if you know you have plenty of ore and don't really care to see it, turn it off to make room for the stuff you're currently interested in seeing. But then maybe have a quick way to see the rest too just in case you need to double check something.

Hairball
4y ago
Builder issues
I'm trying to make my builder bots focus on one space that is building. So I select them all and click the building. They can reach the building, and in fact they surround it. But they ALL choose to build buildings next to the one I clicked on. This is a 5x5 building so I'm very sure I'm clicking the right building but they refuse to build it. I've tried several times. Individual bots ignore it, selecting all bots doesn't help because they all ignore it. I'd like the bots to focus on this one because I'm out of one resource but have a lot of the rest so I'd like a bot at least doing those resources while I wait for the last one to build up.

I guess to replicate it, build a bunch of things one square apart like in my screenshot and try to get all the builders to build the thing in the center and check it to see if it's building. 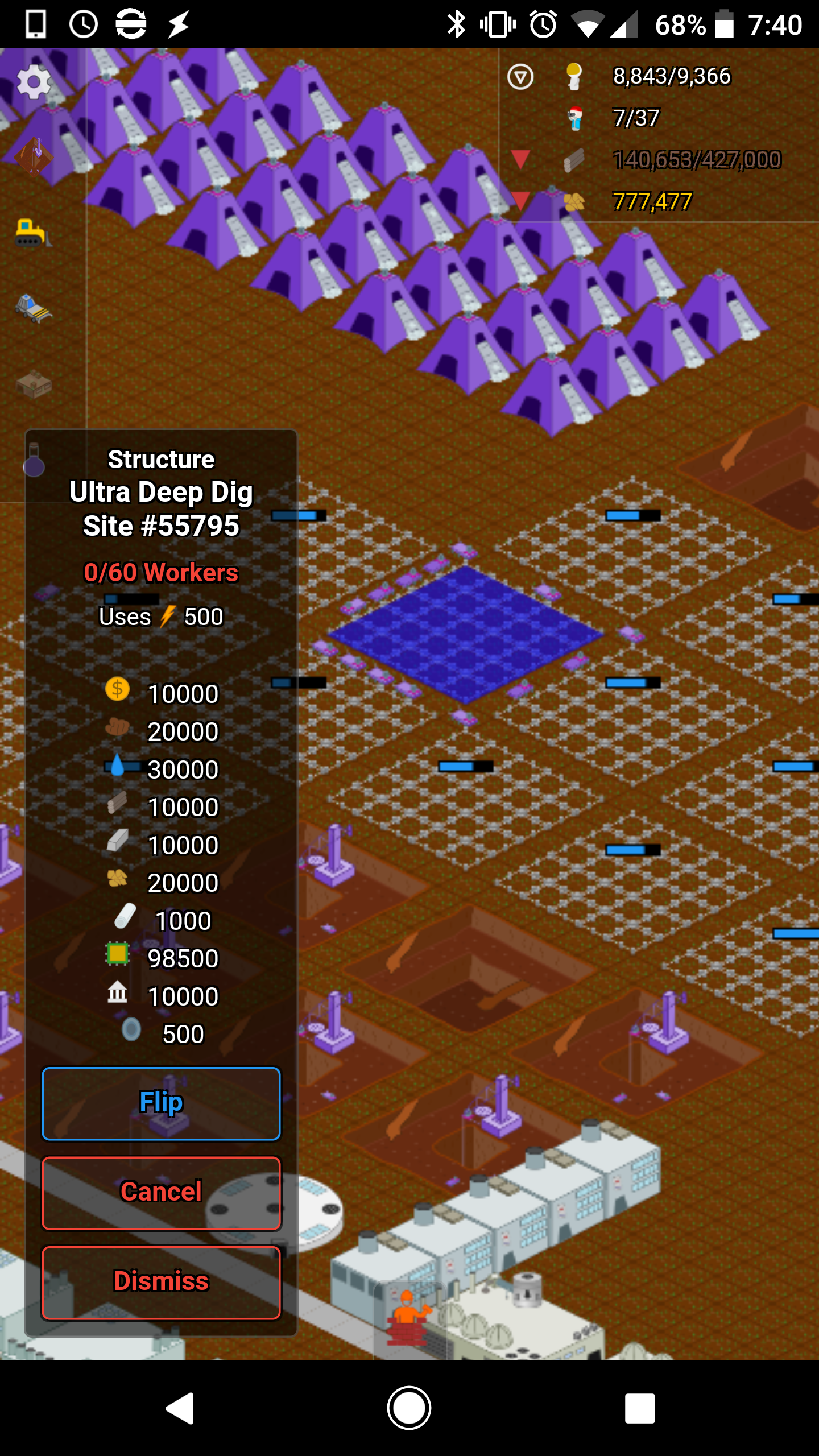 Hairball
4y ago
RE:Builder ideas
To implement #1 I'm thinking just a priority of total number of all resources still needed and then have the bots pick the lowest number. Usually I don't even care about distance: I'm using this mode mostly when I've told ten things to build but only have the resources to finish one. So no matter how far away, I want the bots to all choose the same site.

The other mode would be too pick the site that has the least number of bots already building it. In a tie, the closest wins. This is when you've told ten things to build and have enough of *most* resources except for one critical one which would hold up construction. Each both could supply the other resources to all the other buildings as needed so you're eventually left with everything done except the one "bottleneck" resource. This is when I'd switch to the other mode so they finish the remaining buildings one at a time. :)

Hairball
4y ago
Builder ideas
I have a few ideas about builder bots (of any type).

1. A toggle (in engine settings maybe) to choose from one of two behaviors for builders: one where all bots of that type focus on the building that's closest to being done and one where they spread out so that each bot is building it's own thing. In some cases I've found I prefer one way or the other so it would be nice to be able to command the bots.

2. I notice many times where I am attempting to manually force bots into one or the other of the two modes described above that they don't listen. I click the bot and tell it to move to X building but it goes there and builds Y building instead (a neighbor). This happens with large buildings while zoomed in so I know for sure I'm clicking the right one. Example: I may have told all my dig sites to upgrade but they all need artifacts to do so (and I don't have enough). I want all bots to finish one site first before moving to the next one. So I click each one and click the site I want to start with so that the artifacts I do have all go to that one building and get it done instead of having ten that are almost done and having to wait.

3. The ability to summon all bots of a certain type to a tile. Or all idle bots. Example: I've got a bunch of buildings in process but suddenly want them to all stop and build something else right away.

Hairball
4y ago
RE:Unemployed but not :)
When I turned on colonist rendering I was able to get a list of the unemployed people when clicking on a vacant building's 0/X workers line. But then everyone found jobs. But my unemployment is now negative (which I've seen mentioned in another thread).

It seems to go between these two issues. Colonist rendering on = negative unemployment
Off = 53 or now 54 unemployed when there are plenty of jobs and all buildings are accessible from at least two sides.

Hairball
4y ago
Unemployed but not :)
I have 53 unemployed people according to statistics. I have more jobs than there are people so they should be finding something. If I click a vacant building it says "No unemployment" when I click 0/X workers.

I can't seem to find a reason why 53 of my colonists refuse to find work and stay unemployed. There are paths to all the buildings that are vacant. Is there a way to get a list of who is unemployed like you used to be able to? I could then see them on the map and maybe see where they are stuck? I currently have colonist rendering turned off but I can turn it back on and see what happens.

If I do a fire drill I end up with the same 53 unemployed people once it's over.

Not sure how to replicate this. :)

Member
Member Since
September 16th, 2017
Welcome
Ape Apps, LLC is an independent software development company founded in 2010 by Brandon Stecklein. Over the years, Ape Apps has published over 400 apps and games across various platforms. You can get in touch with Brandon on Twitter or by leaving a post on his wall @bastecklein
Ape Apps
•Ape Market
•Ape Web Apps
•Soundboard City
•BackgroundBag
•Mad About Memes
•Ape Apps Store
•Ape Designs
App of the Day