RE:Anything for faster starship production?
Even though Bast could potentially use nanite tech and potentially simulation tech for next-tier shipyards, keep in mind that starships are supposed to be that one resource in the game that's rare and expensive, making them a luxury owning even 100 will look good to a colony. It's not supposed to be as abundant as other resources like steel or food.

There will be obviously render distance, similar to MC2. You can adjust this in the engine settings and variable can be 50x50, 100x100, 200x200, and 500x500 for those high end pcs. This settings is for ingame, buildable, interactable setting.

For when you do move (pan up, down, left, right), the game will decompile/compile to load those size-controlled chunks. This process will happen in the background, similar to when the game autosaves in the background, so that you can still move around and stuff, not be stuck waiting for chunks to load.
The way the resources will come in from other compiled chunks is that the game will calculate the buildings' resource production and add upon the resource stat. The time interval for each time the game adds the resource can be how it is collected when you are in region view, but I figured that it could be 8 times faster intervals ((theUsualRegionResourceStatTimer) / 8), or it can be 4 times fast intervals, or engine settings (2x, 4x, 8x, up to 16x). This though depends on performance reasoning, so if you decide just to stick with 4x faster than region collection timer, it's fine.

If there are any questions or problems as you think it might be hard to develop this feature, let me know so I can help and hopefully find a solution.
I hope this might be popular. :)

- Ore Refinery,
- Microchip Factory,
- Textile Mill,
- Ant Paste Synthesizer,
- Charcoal Converter,
- Gold Synthesis Lab,
- Cloning Facility,
- Shipyard,
- Helium Nanomine (if you not planing with Gold Synthesis Lab or other buildings, but recommended not
to do this buildings (Helium Nanomine) to find reason for other buildings individual uniqueness in
resource production),
- Any other building I missed that is tiered from a previous building, obviously not all buildings,
- Obviously not all buildings will get upgrades.
- Tech for these buildings will be in Simulated Fabrication (The 35B Research one).

Overall point is that this 'simulated colony' is fabricated virtual resources and is sending it to the real colony.
Building themes (colors, etc) can relate to Simulated buildings like Nanite Factory and Software Studio.
Some existing buildings might be adjusted (example: Brick Factory, being very vigorous in it's fast production) to balance out the game and have that feel of My Colony - ness.

RLMYTHICALLEGEND
21d ago
Mass Remove Trees, Sugarcane, etc.
I suggest that there should be a mass removal option of vegetation like trees and sugarcane, though, this can also imply for non-vegetation like crystalline and diamond growth, pretty much anything that has a spread rate. The reason for this is when you have a large map, but it's already starting to spread its own vegetation quickly, making it hard to contain. It wouldn't be a problem if it weren't a performance issue. I think it would be great and alters minimal changes to the vanilla style of the game.

RLMYTHICALLEGEND
2mo ago
RE:My Colony v1.21.0 Released
I noticed that for Deluxe Bussing Authority, Tall Construction is the tech requirement, but Megabots are used to build it. A mistake? I here point it out for you.

Also, in Encyclopedia, the Terrain tab doesn't have the terrain objects in alphabetical order, jtlyk.

Can you have the part where it says 'File', 'Edit', 'Insert', etc GUI be expandable? So that when you want to export the png, it would take the full 1920x1080 instead of the 1920x1008 when you hit F11 to full-screen Chrome. I see that it "screenshots" the model, but not the part where the gui is in the way. It's important for making icon sprites so they will ratioly align and not cause blurry details. This would be helpful, thx.

RLMYTHICALLEGEND
7mo ago
RE:Voxel Paint v1.10.0 Released
For MC2, I know I mentioned it before, but are you going to add the progress bar on buildings? Also, another thing, for modding of buildings, can you have the option for customizing the amount of resources you get from selling the building? Like maybe you want to sell the building for 100% the amount you bought it for. I think it will be interesting for some modded bundles.

RLMYTHICALLEGEND
8mo ago
RE:My Colony 2 v0.18.0 Released
I think Bast, the next update you should include a GUI for building stats like in MC1 where you click on a building and go into stats. Also, another thing everyone wants is a progress bar of production buildings, it is the only reason why people feel happy about a building producing resources. A few, probably known bugs you should fix is when a player tries to click on an ore (or other) deposit, it doesn't show how much you have. Everything else is good. Like the modding integration. Happy New Year.

RLMYTHICALLEGEND
11mo ago
RE:Major Update to Voxel Paint
Thankyou Bastecklein for adding such features as the opacity and other cool ones like metallicity and particle effects; also along with the performance integration. Great work! Getting exciting myself. XD

RLMYTHICALLEGEND
1y ago
RE:My Colony v1.15.0 Released
The next project you should work on is having opacity for voxel paint and MC2 so that colors can have characteristics of 'glass'. I think it would be important, especially in the development of MC2.

RLMYTHICALLEGEND
1y ago
RE:My Colony 2 v0.14.0 Released
One more thing, when will this bug be fixed?

RLMYTHICALLEGEND
1y ago
RE:My Colony 2 v0.14.0 Released
For MC2, is the pavement road mod speed working properly? Because before they used to not affect the vehicles at all and I tried to do something with that, only ending up unsuccessful. Could it be still in development? Or fixed? LMK.

RLMYTHICALLEGEND
1y ago
RE:Work Started on Scroll3d
I would imagine how MC2 would be like when the game gets released. Gets exciting every each update!

RLMYTHICALLEGEND
2y ago
RE:Disappearing civics and Disappearing resources
I had the same problem. This should be an urgent fix because I keep waiting for the update on it so that I don't lose so much of civics that some buildings requires above 3K.

RLMYTHICALLEGEND
2y ago
Disappearing Civics after Independence Claim - 5/1/20
Recently I've been playing with Insectoid race and I just today claimed Independence, but after I did that everything went ok until my civics out of nowhere went back to zero than climbs to like 1500-3500 civics than it disappears again over and over. It's weird and I don't know to not lose it all because I've been trying to farm it for a core mine upgrade, but it just keeps on disappearing. It getting upset about this. Update asap if you can! :)

RLMYTHICALLEGEND
2y ago
RE:Adding in the economy section of buildings with and without people working in it.
What I meant was like 'not all buildings to the gold refinery occupied'. I don't mean a list of each building of that type that doesn't have a worker. Just show the type of building that needs more workers to the top.

RLMYTHICALLEGEND
3y ago
Adding in the economy section of buildings with and without people working in it.
Can you this very useful idea of having what buildings have vacant jobs in the Economy>Job report. It will really help what buildings don't have people in it (red) and what buildings are already occupied (blue and light blue).
If you agree, thanks!

RLMYTHICALLEGEND
3y ago
Regolith Storage
Can you make a storage building, ( or add storage in a existing building), for Regolith? It will be very helpful, especially if the colony is at advance growth. Make a buillding with storage about 30,000. Plz., and thx. 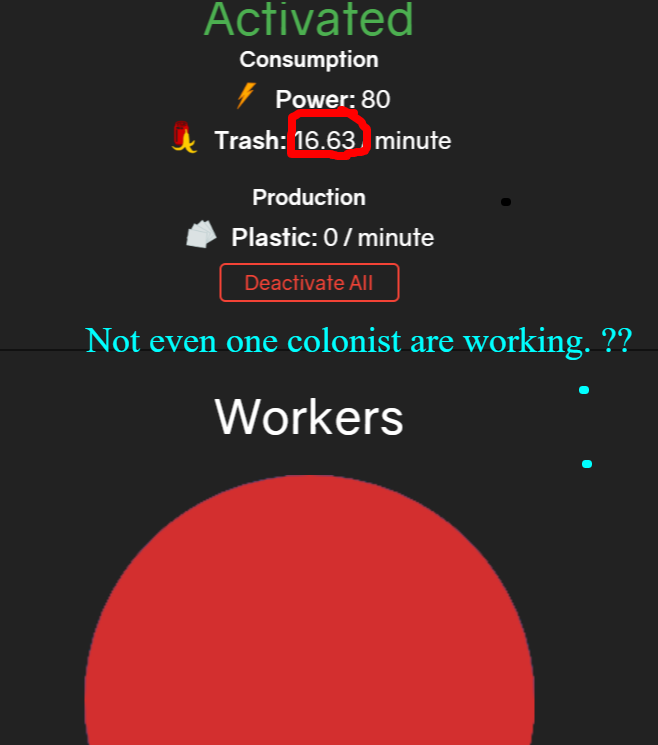 Member
Member Since
September 15th, 2018
Welcome
Ape Apps, LLC is an independent software development company founded in 2010 by Brandon Stecklein. Over the years, Ape Apps has published over 400 apps and games across various platforms. You can get in touch with Brandon on Twitter or by leaving a post on his wall @bastecklein
Ape Apps
•Ape Market
•Ape Web Apps
•Soundboard City
•BackgroundBag
•Mad About Memes
•Ape Apps Store
•Ape Designs
•Official Discord Server
App of the Day