NOZ Q&A transcript
Thanks for doing that Q&A with NOZ, Bast!
Here's a transcript of the whole thing for those who prefer a text format.

Vyryn
2y ago
RE:Diversify federation leadership
Some federations might, though... Although the real big ones already have systems like that in place in some way. NOZ and the FFF, for example, both have external discord servers where most of the information exchange takes place. One day, perhaps, the in game interface will be so fantastic that we can go exclusively in game.

Vyryn
4y ago
RE:New Forum Moderator
You deserve it. Congratz!

Vyryn
4y ago
RE:Move pre-regions maps into the regions?
It's probably not as easy as you'd think; two points, one the save structure appears to be different since you save your map within your region and you save your region as a file. two, what about maps that have been expanded? They wouldn't fit nicely on a specific number of regions tiles...
Bonus point: This way all the really big maps will gradually move from really old maps to much newer regions where "
map quirks" accumulated over time will no longer be present. If you've had a map for several months you probably know what I mean.

nunez499 said:I've noticed in the outflow of the money resource wages and welfare.
Welfare could be salary and wages the wages set from the policy. Except my wages in the outflow were 5,7mil. I have it set at 10 dollars and I have 200k pop. If every colonist gets 10 dollar
it can't be more than 2 mil. And I have the salaries set higher than the 10 dollars for wages, so something is not right about those figures.

It sounds like you're confusing three things. Welfare is a base pay each of your colonists gets regaurdless of employment, while salaries that you said you have set higher than 10 dollars are added on top of that for colonists employed in those jobs. So if you pay your botanists $10 and you have a welfare of $10, you pay that colonist $20. Since you said your salaries are set somewhat higher than $10, and at $10 you expect wages to be 2 million, if you have the average salary set to $18.50 your numbers work out.

Vyryn
4y ago
RE:in game federations - Page 2
The "Annex Land" Button at the bottom of your capitol's policy menu. It may require a certain level of capitol above and beyond level 1, but I'm not sure what level exactly.

Vyryn
4y ago
RE:[NOZ] NOZ Collective - Towards a Unified My Colony Community- Largest My Colony Federation on Discord - Join us today! - Page 10
NOZ is now in-game! Join us on discord to see the full announcement, or join the official federation in game, which is called "Nations of Oz"

Vyryn
4y ago
RE:in game federations
You can expand the borders of your map an unlimited number of times. Theoretically, it can be larger than any regions map.
If your still upset about premium features, though, think of it like the game was not free but cost what premium cost. Its a one time fee, not a subscription or microtransactions; bast has to make money somehow, and the current model is by far the best possible way.

Vyryn
4y ago
RE:v0.75.0 Web Pre-Release Errors and Questions - Page 3
@XxKubxX indeed it is :)
I've just made a public announcement on discord about it. The past day we were testing it out with a couple wizard core people.

Vyryn
4y ago
RE:My Colony v0.75.0 Released - Page 2
Not only independent but as it stands right now having built a hall of congress. This closes feds off for the midgame, though perhaps it is a good reason for people to hold off on their independence until they can afford a hall of congress.

Vyryn
4y ago
RE:My Colony v0.75.0 Released
cry is trying the half n' half route today.
Same problem applies with the other member who from my screen looks in.
There shouldn't be a 3 day delay, because as my vote was the only one when cry applied, that's 100% yes already

Vyryn
4y ago
RE:My Colony v0.75.0 Released
Currently it seems to be that only people with a hall of congress can see the federation tab in the policy menu at all, so people with only, say, a capitol level 6 can't join through the join federation button. Is that intentional?

Vyryn
4y ago
RE:v0.75.0 Web Pre-Release Errors and Questions - Page 3
Yep, made one and it shows up. Not sure if it will work as intended, but you can create them now.

Vyryn
4y ago
RE:How to change the map size/type of my colony?
The only limit to expansion is your computer's performance, so it's theoretically unlimited. However, a regions map will let you easily get a larger total size than you would be able to run on any practical computer via expansions.

Vyryn
4y ago
RE:The Great GDPocalypse
Honestly, this is something that has slightly bothered me for over a year. Thank you for making this number meaningful.

Vyryn
4y ago
RE:v0.75.0 Web Pre-Release Errors and Questions - Page 2
Is this working? If so, what are the in game capabilities of federations so far? 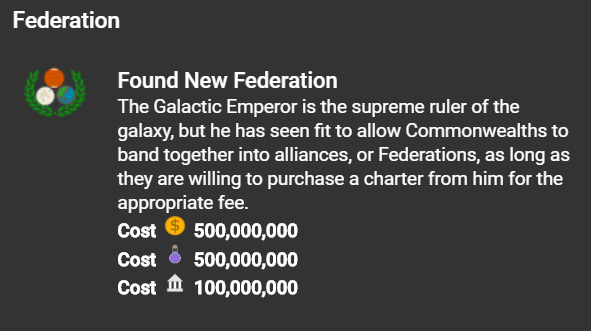 Vyryn
4y ago
RE:What happens after independence?
If you make a support colony within your commonwealth, it will pay taxes. If you don't want that, you have a few options.
1) You can make the sub colony independent
2) You can up your payroll to give it back it's taxes automatically
3) You can send your sub colony a bunch of money to cover it's taxes
4) You can reject the taxes, but there will be consequences. When you want to turn the mother relations back up, you can send a bunch of tax demands of $0 to bring them back up for free.

Vyryn
4y ago
RE:In-Game Messaging Rewrite And Other Changes Coming in v0.75.0
This sounds so awesome it almost sounds like an April fools

Member
Member Since
October 30th, 2017
Welcome
Ape Apps, LLC is an independent software development company founded in 2010 by Brandon Stecklein. Over the years, Ape Apps has published over 400 apps and games across various platforms. You can get in touch with Brandon on Twitter or by leaving a post on his wall @bastecklein
Ape Apps
•Ape Market
•Ape Web Apps
•Soundboard City
•BackgroundBag
•Mad About Memes
•Ape Apps Store
•Ape Designs
•Official Discord Server
App of the Day