RE:Stages
Is this still a bug? Seems like I'm missing the Investment Bank... I have the required techs (Tall Construction and Galactic Finance Theory), but it doesn't show up on my building list, nor on my Construction Drone's building list.

barbossa42
4y ago
RE:TRIPPED , how do you do it? i want one!
@Nikko I'm using data from this link: https://www.ape-apps.com/viewpage.php?p=584
It has no data on amount, just prices. The graphic follows the rolling price.
My guess is that those spikes (those are HUGE, the graphic is in logarithmic scale) were caused by Ruffians buying some of those absurdly expensive and large contracts (like 100.000.000 Uranium for 200.000.000 per 100) and selling everything for 0...

barbossa42
4y ago
RE:Random rare resources appearing
Thanks, never notice this on the Black Market Bazzar reference.
Maybe it's time to build a whole black market colony... 0.85/min of 28 resources... So, for every 28 Bazzars, I get 0.85 of each resource/min (theoretically, because they are random).
With only 2800 Bazzars, I cant get 85/minute of diamonds, antanium, uranium, aluminium, alien artifacts...

barbossa42
4y ago
RE:[API] GBT Prices
Just a question... how does the rolling price works?

barbossa42
4y ago
RE:selling or bulldozing multiple stuctures
Also, I neglected those Sugarcane trees since the beginning of my colony, now they are taking over most of the empty space... I'd love some way to bulldoze them en-masse, or make some sugar cane collector available for human colonies as well...

barbossa42
4y ago
Random rare resources appearing
I've been getting this bug since v0.45. Almost every time I load a game, I get 1 or 2 of a random resource I can't generate. In the attached screenshot, highlighted in pink, I have sugar and ant paste in a human colony, and my colony doesn't have any uranium, crystal or diamon deposit. 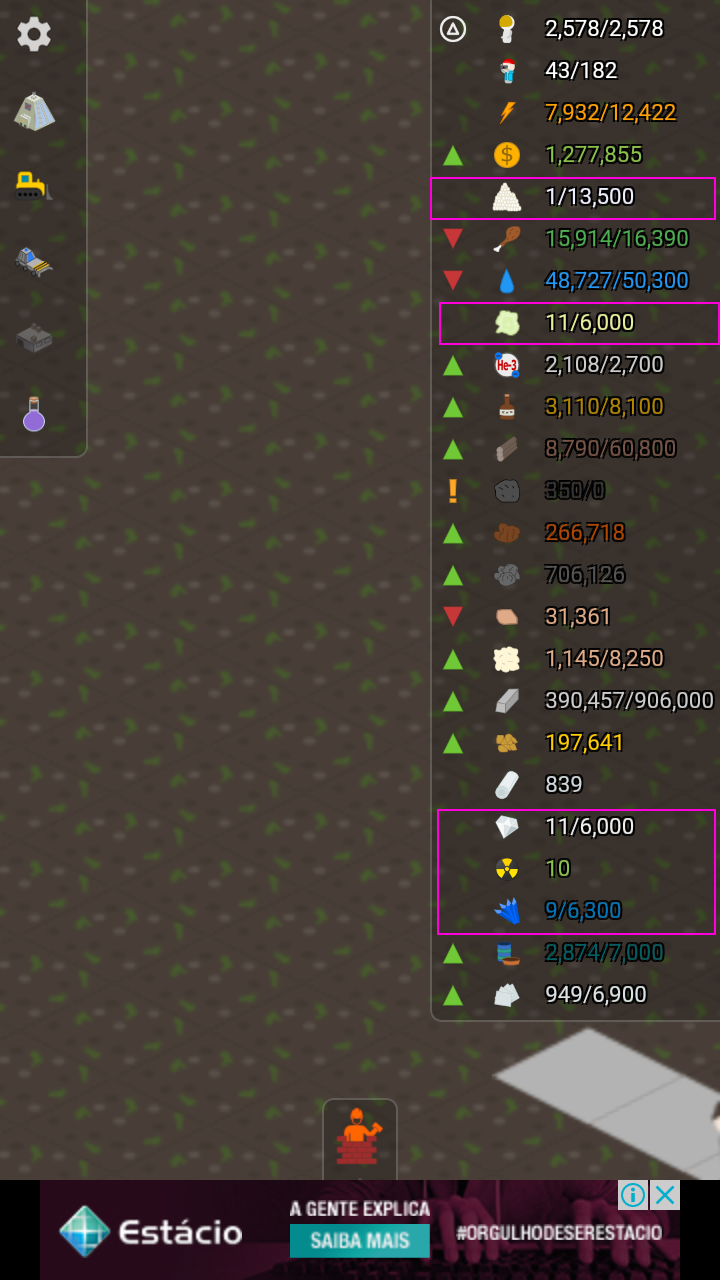 Member
Member Since
October 10th, 2017
Welcome
Ape Apps, LLC is an independent software development company founded in 2010 by Brandon Stecklein. Over the years, Ape Apps has published over 400 apps and games across various platforms. You can get in touch with Brandon on Twitter or by leaving a post on his wall @bastecklein
Ape Apps
•Ape Market
•Ape Web Apps
•Soundboard City
•BackgroundBag
•Mad About Memes
•Ape Apps Store
•Ape Designs
App of the Day