RE:Region City Corruption: Can't Get Back into Cities - Page 2
I've been unable to play this week, so only now I could try this:

I restored a backup of my save files from 1 week before the region "crash", and the problem is still there, so I'm thinking it's more server sided than local files.

Again @bastecklein ,sorry to ping you, but is there a log file in the Windows native client we could check, to see what is the problem?
The city loading always fails after display the "Logging in to server" message.

hypo
3y ago
RE:Region City Corruption: Can't Get Back into Cities - Page 2
This morning, I tried again to enter the city, but I noticed this:
The region map was showing the gift icon (probably from GBT sales), and after selecting the city then thrown back to the region map, the icon disappeared, and even entering the 2nd city did not show it.

@bastecklein sorry to ping you, but is there a log file in the Windows native client we could check, to see what is the problem?
The city loading always fails after display the "Logging in to server" message.

hypo
3y ago
RE:Region City Corruption: Can't Get Back into Cities

Xanadu said:Have had another regional city corruption. But, this time it wasn't corrupted after a hanging save (although hanging saves are still happening).

I just had the same situation. My main city in my zolarg region has saved when going back to the region screen, but then I could not go back in.
I tried to reload the region, then to reload the whole game, but the main city is still blocked.
The second city on that region remains accessible.

I have a backup of my files from a few days ago, but I don't know which file contains the said city, since they get a numeric name...

hypo
3y ago
RE:messages and embassies!
Similar situation here: sending from my zolarg region to my human colony is immediate, but in the other direction it takes very long

hypo
3y ago
RE:Resources appear which I cannot produce and did not buy
Take a look at what your black market can produce...

hypo
3y ago
RE:My Colony v0.75.0 Released - Page 3
@bastecklein in the Windows client (downloaded from your website), the window now shows standard borders (on Win7). Is that normal?

hypo
3y ago
RE:Resources decaying to zero in regions
I still have the situation in 0.75:

Region with 2 cities, the only aluminum consumming unit is the cloth farm in the main city, nothing in the 2nd one.
Statistics page gives me a regional consumption: 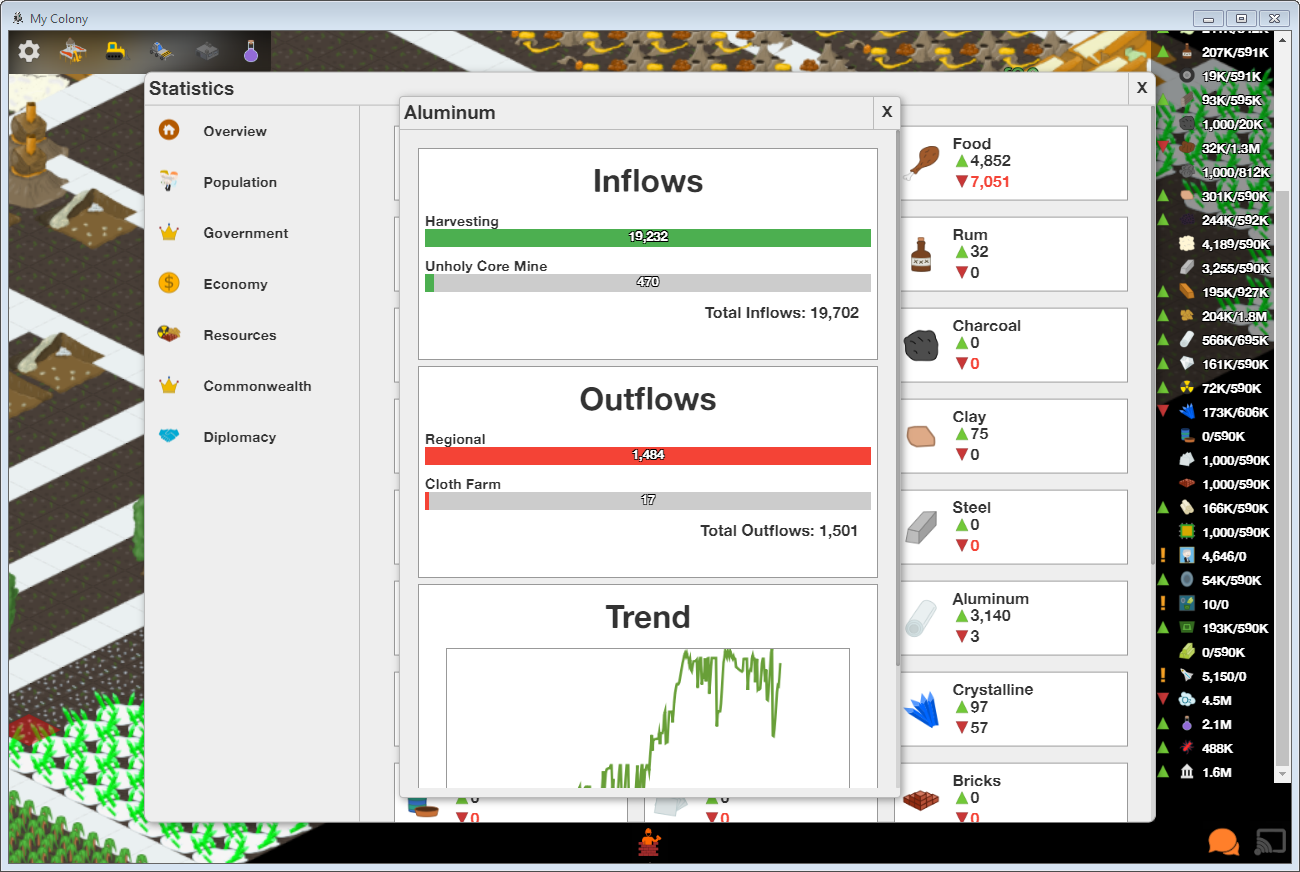 hypo
3y ago
RE:Premium disappeared
I don't know if you fixed something, but I restarted the game on Android, and now Premium is back.

My 2 cents: when I launched it on my tablet just before the problem, the Wifi was activating when the game loaded.
Could it be the cause, as the game didn't get the Play Store credentials (if those exist) and when I logged my account, it did as Non-Premium? Could the Android Version reset the Premium info on the Ape-apps website??

hypo
3y ago
RE:Premium disappeared
It was from Android Play Store, quite a long time ago.

I just played this afternoon and game was launching fine (but not loading one colony, as told in another post), but no I lanched the game again and it didn't find the Premium credentials.

Same on Windows native and Android, so I looked into the Manage Account page and the Premium option is now set to NO .

hypo
3y ago
RE:Why do I have people from different races? I started human and now I have other races like insectoid...

Sobeirannovaocc said:It's illegal immigration, that's also why they come even if your housing is full

Nope, they don't appear as illegal, it just seems like the immigration setting has no effect on them if I leave the stargate powered.

hypo
3y ago
RE:v0.75.0 Web Pre-Release Errors and Questions
Do you have a rough estimation of when this will be available on the other platforms?

hypo
3y ago
RE:Why do I have people from different races? I started human and now I have other races like insectoid...
I noticed the same thing recently, my colony population was growing even with immigration turned off.
But the stargate should be subject to the immigration setting, I don't understand why it is different from the landing pad.

hypo
3y ago
RE:Connection Error for existing colonies
Check in your main menu if you are still logged in, after loading the region.
I have sometime the same issue, have to get back to menu and log in.

Since I had much given up on this LIS region, I tried the most extreme solution I could think of: switching back to local mode, then to Online Mode.
The region received a new charter code, with a valid webpage this time, and I managed to get annexation from my main colony.
So probably the original problem was that the region did not correct subscribe on the game servers.

hypo
3y ago
RE:About deportation
That's quite a difference of difficulty, as the Congress costs so much...

hypo
3y ago
About deportation
Recently, I noticed on my zolarg colony that the Unholy Command allows to deport citizens.

Is there the same function on human colonies? What do we need to do to unlock it?

hypo
3y ago
RE:Resources decaying to zero in regions
Just to add to this discussion:

I have a insectoid region with 2 cities, 1 main and a smaller one.
Be it from either city, I observe a 233 aluminum consumption from the region in the stats page, but I'm sure that the smaller city has no building consuming it.
Of course, in the main city, there is a clothes farm, but when I'm on that one, I shouldn't see any regional outflow.

hypo
3y ago
RE:My Colony v0.74.0 Released - Page 2
Hey Bast, by any chance, did you change the mouse wheel behavior in the native client? The zoom factor seems bigger than before.

Member
Member Since
July 23rd, 2018
Welcome
Ape Apps, LLC is an independent software development company founded in 2010 by Brandon Stecklein. Over the years, Ape Apps has published over 400 apps and games across various platforms. You can get in touch with Brandon on Twitter or by leaving a post on his wall @bastecklein
Ape Apps
•Ape Market
•Ape Web Apps
•Soundboard City
•BackgroundBag
•Mad About Memes
•Ape Apps Store
•Ape Designs
App of the Day