Texture mod editor not working since version 0.56
A detailed description of your issue.

Whenever i try to create a new texture mod it just keeps on loading, on the orange splash screen and has been doing so since version 0.56, it let's me do everything else in the mod section just not that, also once it's clicked and goes into loading mode it then has to be stopped by closing the game down otherwise it would continue indefinitely.

I can load up the texture mod i have been creating and it works fine and i have tried creating a new texture with the vanilla version of MYC and my own and both do not seem to affect the problem so i'm guessing its a loading of the texture editor only or that's what it looks like to me.

Steps to replicate the issue you are having.

The platform for your game

Version of My Colony

Toddy
4y ago
[MOD] Texture mod editor not working
This last update has made the texture editor stay in a continuous loading loop, i have even left it 5 mins to load but still stuck on the orange loading screen, all other parts of the game work as per normal i think (not checked them all) .

Toddy
4y ago
RE:[MOD] Zolarg Prime - Page 2
Yeah it was human error (me) sorted now .. thanks for the pointers appreciate it ;) also keep up the good work it looks really good

Toddy
4y ago
RE:[MOD] Colored Lander
does a big hmmmm and chin rub wondering about the colony wars .. it best be darn good ... i am a dune and c&c veteran ... no pressure :D

Toddy
4y ago
RE:Coming Changes to the Modding Engine
really nice to see and iv'e just done my first 15 redraws !! uploading the mct file next, love the idea of adding mods in game instead of the time consuming way it is now im all for speedyness, will the mod list be in alphabetical order then or will it still be randomly listed as it is now bast?

Toddy
4y ago
RE:Can't build an embassy
not working for me either on windows 10 pc client i can input the charter code then i get the build embassy pop up with the costings but when click build nothing happens but dismiss does

Toddy
4y ago
RE:i have some old colonies from a while back about 5 months ago(ish) and would like them online again
I built a trans hub but when clicked only get option to send a message no annex there.

How do i do it again?

Toddy
4y ago
RE:My Colony v0.55.0 Released
progressing nicely and cant wait to see more about this iq and age theme, will there be better ways to get rid of atmosphere coming other than the atmos condensers ? or have i not reached that stage in the game where air scrubbers are available?

Toddy
4y ago
RE:first aid building on LIS map missing
this is screener from mod tool ... no image and a image icon instead 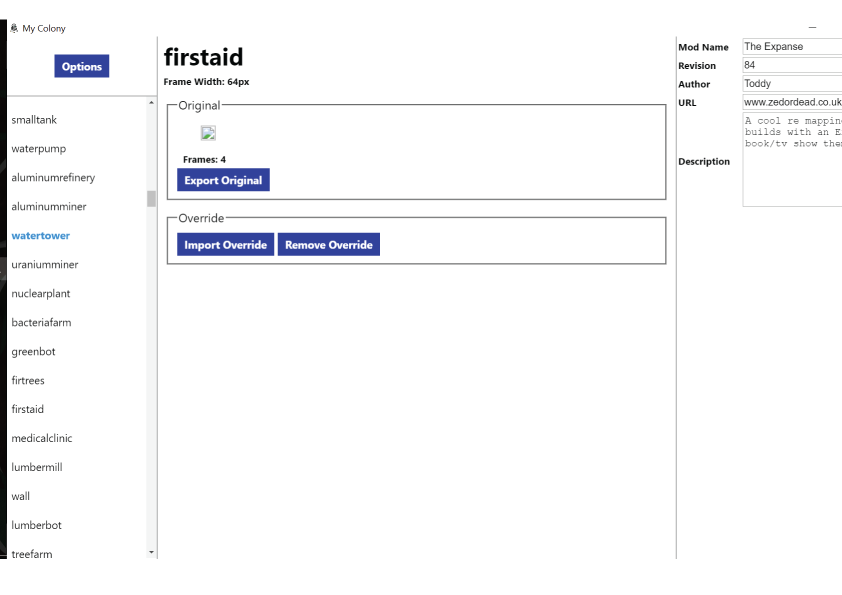 Toddy
4y ago
RE:first aid building on LIS map missing
One thing i did notice is avast virus protection flagged up a false positive when trying to install the last update this morning, i had to uninstall avast otherwise it wouldn't have installed the update, not sure thats related or not but it's never flagged up once in 30 odd updates

Toddy
4y ago
RE:first aid building on LIS map missing
No stays the same ... it's like the graphics missing from the index or something

Toddy
4y ago
RE:[MCR] Come one and all to the Mars Congressional Republic .. we have cake - cwMXoAZ9

Toddy
4y ago
RE:first aid building on LIS map missing
once the invisble buildings clicked i get stats but no building ... it's those pesky klingon cloaks again.

Now that would be a hard map ... every building cloaked 😀 it would make lava world seem tame. 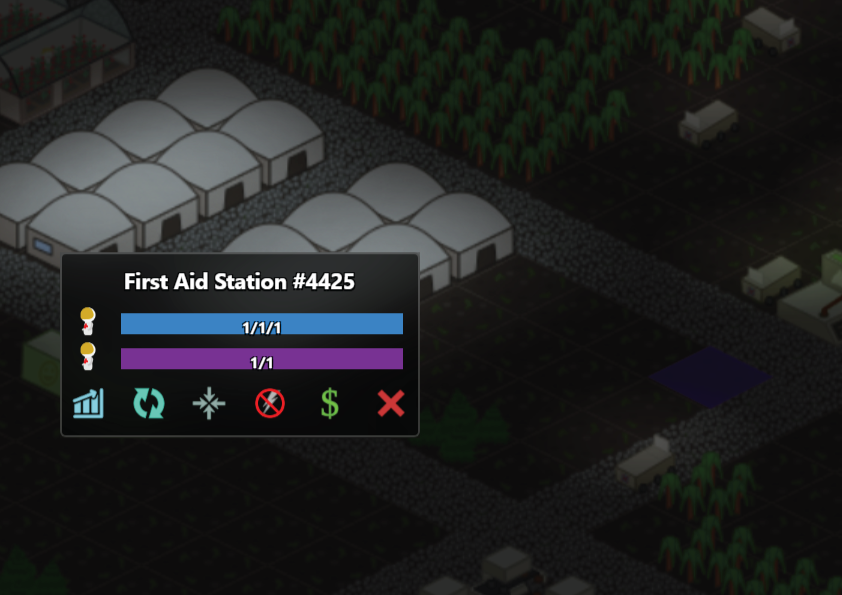 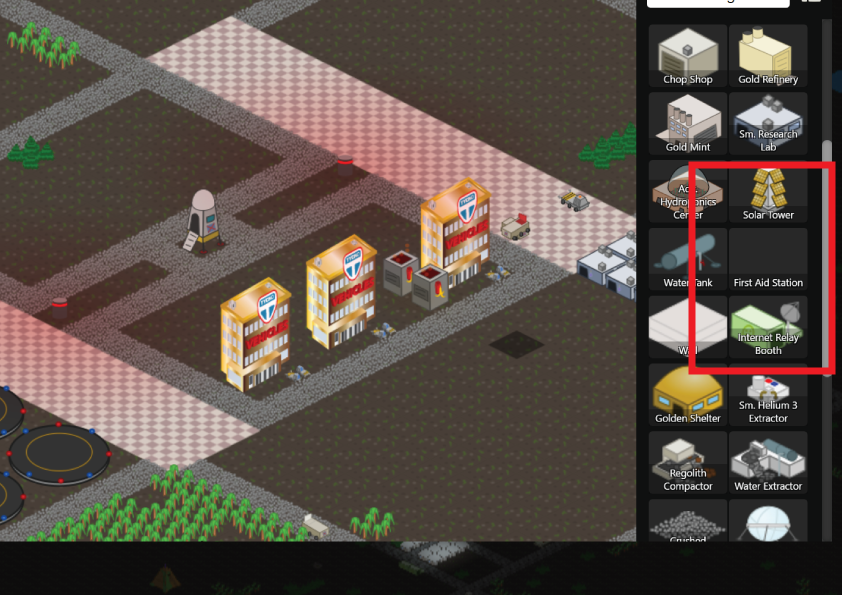 Toddy
4y ago
RE:first aid building on LIS map missing
yes so far .. i will reboot game see if it replicates

Toddy
4y ago
first aid building on LIS map missing
On the LIS map with alien artefacts i have no image of the first aid building in the building menu nor when it's built either but there is a building there when i click on the empty space where the graphic should be.

Toddy
4y ago
[MCR] Come join the Mars Congressional Republic .. we have protogen - cwMXoAZ9
-----
Welcome traveller i see you are not associated with a commonwealth charter?

Why not add ours as your charter code cwMXoAZ9 we will help with resources any way we can.

You need not be a pro at this game all levels of citizen are welcome here, we have players who have been around since the game was in 0.20 beta and are always happy to help, we also have a discord channel for chat and tips.

Not only can we help with the game we also helped with some of the early graphics and continue to add our ideas in the game ideas forum, but we don't have to wait to see your ideas added to the game because we also have a very active modding group who are slowly modding the UE charter maps into the Expanse universe check the post linked below for more info.

plus we can help you use mods for this game on your computer just ask for help in the forum post linked above.

I will fill this out more sooner but we have just been attacked by the UN and this weird purple mutagen called proto molecule was released into the mars colony so we are busy cleaning up at the moment so please feel free to leave a comment or 2 below and please vote in the poll.

Toddy - President of the M.C.R.

Toddy
4y ago
RE:add bridges
they have already been suggested a fair few times and i even added graphics for them once but they didn't get implemented so i used them in my mod instead https://www.ape-apps.com/viewpage.php?p=16093 i replaced some sand and grass decorations with 3 bridges so they will be used as paths by bots ... i now have cool looking bridges over my water features but one or two 3 square length bridges would be nice so i can draw suspension type ones instead of single tile

Toddy
4y ago
RE:Reptilians - Hot Rock
unless you make the hot rock as the main part of the building graphic then create a high tech surrounding to it with purple bits here and there otherwise id agree with steve

Member
Member Since
November 26th, 2017
Welcome
Ape Apps, LLC is an independent software development company founded in 2010 by Brandon Stecklein. Over the years, Ape Apps has published over 400 apps and games across various platforms. You can get in touch with Brandon on Twitter or by leaving a post on his wall @bastecklein
Ape Apps
•Ape Market
•Ape Web Apps
•Soundboard City
•BackgroundBag
•Mad About Memes
•Ape Apps Store
•Ape Designs
•Official Discord Server
App of the Day