RE:Constant crashing of my colony regions
I am patient. Very kind of you to add the button!

Wereldvreemd
2mo ago
RE:Constant crashing of my colony regions
This happened on regions only once I got multiple smallers cities (like 4-5). It doesn’t happen on single maps but then I don’t have advanced single cities.

I think it’s more an issue with building and colonist production being highly resource intensive. I can immediately feel my mobile heating up with those things. Could it be that every time a colonist is produced the entire batch (e.g. all tens/hundreds of thousands of colonists) gets reallocated? Something like that may dramatically increase resource consumption if that happens multiple times per second.

For why building is so resource intensive, I don’t know. I can corroborate electro’s story though. My current strategy is switching off everything while build, ideally with a stack of 1-2k drones so I don’t spend hours waiting and it gets somewhere between crashes.

Thanks for looking into this!

PS: Do you have a clue how to backup a region on iOS?

Wereldvreemd
2mo ago
RE:Constant crashing of my colony regions
Hi,

Been playing around with what works and doesn’t:
Two things that heat up my iPhone in seconds and seem to increase crashes massively: the ether cloner and building drones.

The cloner churns out colonists like hell and it may be they have to be reallocated multiple times per second. Lowering the refresh rate seems to help somewhat. Sadly there are no realistic alternatives if you need to grow 300k colonists, especially if you cannot leave your phone unattended for a time due to crashes.

I would already be happy with a button to store a region so I can move my colony back to PC when back from holiday. :) Unplayable on iOS atm for me.

Wereldvreemd
2mo ago
RE:Constant crashing of my colony regions
Hi Electro,
Thanks for the advise. I can try switching off buildings while building.

I’m not quite sure what you mean with a large colony. I have only 10 medium cities, most with a single resource in them and quite small. The game crashes in new cities before I can place my third building.

Can something like removing bus stops help? Since it’s not correlated to size of the cities but number of cities, it might help communication between them.

Wereldvreemd
2mo ago
Constant crashing of my colony regions
Hi,

After the latest update, my region in mycolony is crashing every few minutes on iOS. I set all settings to as memory efficient as possible, much lower than what I had before. I am not getting any crash reports. This never used to happen before. I get this is not much to go on, but any idea what could be the issue?

Furthermore, i seem to be unable to save a region as a file (backup/move to pc and back). If you click Game data > Backup Game File you can only story mcz (city) files, even for regions (instead of mcr). Of course these do not work when opening from another device. On PC you can click backup while loading as well. On iOS you cannot, hence I cannot move my region to pc where it may work.

Wereldvreemd
2mo ago
RE:My Colony v1.11.0 Released
I agree with Wlof. I am not sure what problem there are trying to solve with the limits, but it kinds of defeats the purpose of multiple cities working together (e.g. different species for different resources).

Wereldvreemd
1y ago
Regions
Dear Back,

Thanks a bunch for making builders stackable, the function is great. They have been absolute drunk since then (go in some drive up and down loop before they decide on an action) but that is to be expected when 500 droids try to make a decision together.

Secondly, as many suggested, an easier buildoze tool would be great (e.g. being able to enlarge the area or link a line like with building roads).

Lastly, please consider being able to annex land in regions. I love the regions for reducing lagg, especially for end game cities, but the towns are to small to be able to play well. For example, I need to build a massive amount of immigration buildings to get 200k pop for a tiny city, before I destroy the immigration again, build new buildings, kick out the the excess people, etc and that times 50.

I love the game! Played it to much so for the end game colonies I would like to request some small quality of life improvements.

1. Improved drones/builders. I have 150 turbo drones flying around, besides dozens of builders, which is causing quite some lag. Late game, resources are no longer the issue, but how you can spend those hundred of millions as fast as possible.

2. Large area (or linear like roads) bulldozer. While rebuilding massive parts of the map, most of my time is spend bulldozing previously build grass, roads and decoration.

Thanks you for your attention. 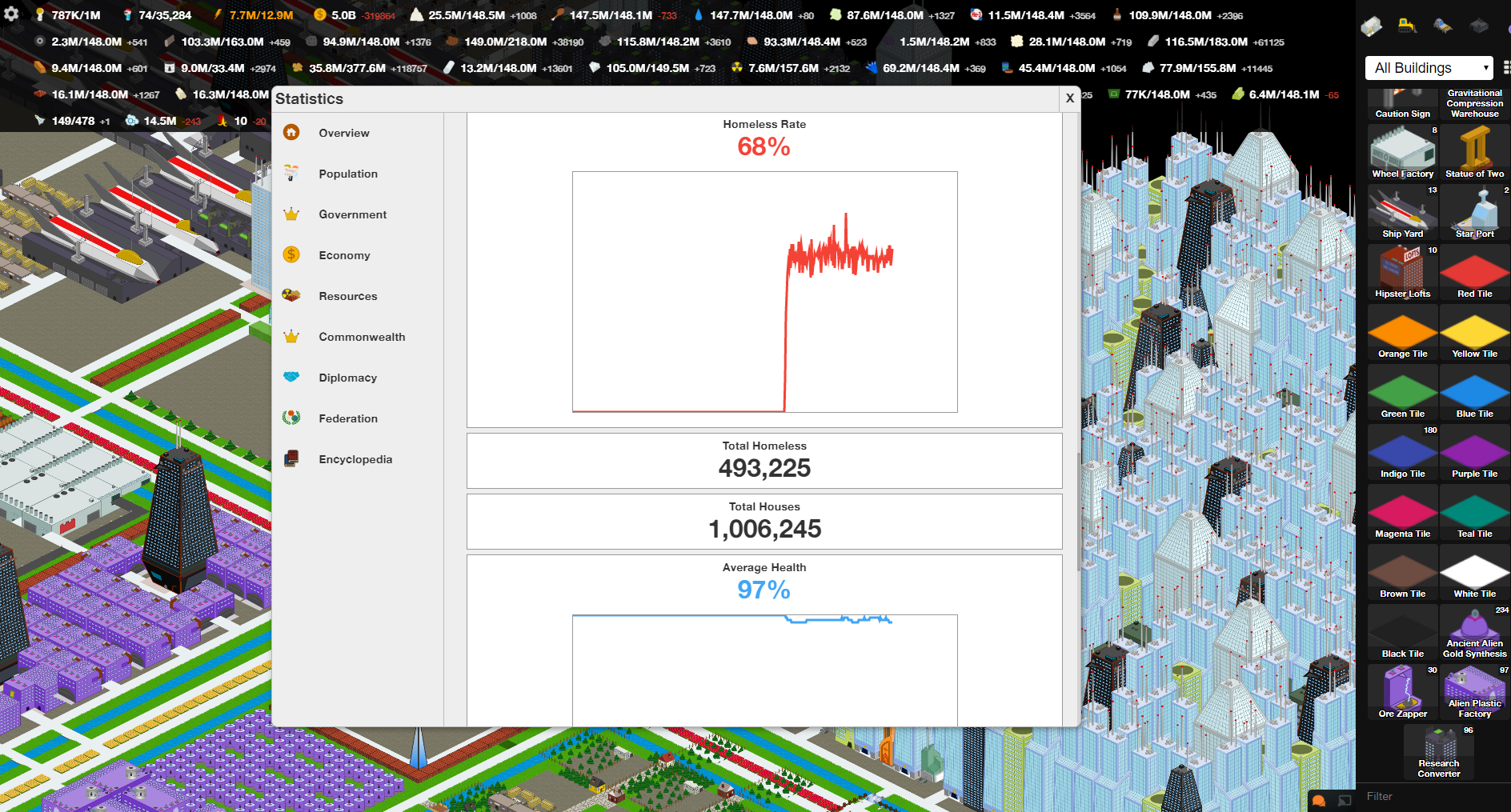 Also, recently I have trouble keeping my colonist at 99% happiness. They are frustrated about being poor, even though I spend about 300 million per cycle on (living) wages.

Member
Member Since
November 9th, 2018
Welcome
Ape Apps, LLC is an independent software development company founded in 2010 by Brandon Stecklein. Over the years, Ape Apps has published over 400 apps and games across various platforms. You can get in touch with Brandon on Twitter or by leaving a post on his wall @bastecklein
Ape Apps
•Ape Market
•Ape Web Apps
•Soundboard City
•BackgroundBag
•Mad About Memes
•Ape Apps Store
•Ape Designs
•Official Discord Server
App of the Day