RE:Jobs not filling & colonists homeless - Page 2
As of 14 May, this bug has not been fixed.

gewisse
2y ago
100% unemployment - 100% homeless
The other day I uninstalled the free Windows version of My Colony as it wasn't loading and I noticed that it was no longer being offered. So, I purchased the version in Windows Store.

Has something changed and I've missed noticing in an upgrade?

gewisse
2y ago
Emigration
Now that I've started using Alien Tech in my colony, I have more colonist than work. Can I force emigration?

gewisse
2y ago
RE:Resources randomly deactivating
It was my understanding that any building that required workers are the only ones requiring a "space" to allow access. But most versions before 1.3.0 would allow non-employee-required buildings to be build next to each other without "space". This issue I'm having just started with v1.3.0.

gewisse
2y ago
RE:Resources randomly deactivating
Now that the subject of the resources being next to each other has been raised, I now see that all the deactivated resources are the inner ones. Something like this used to happen well over a year ago but hasn't been a problem.

Am I guessing right that some rule that was not enforced before is now being enforced?

gewisse
2y ago
RE:Resources randomly deactivating
sorry, the like to the screen shot didn't work. 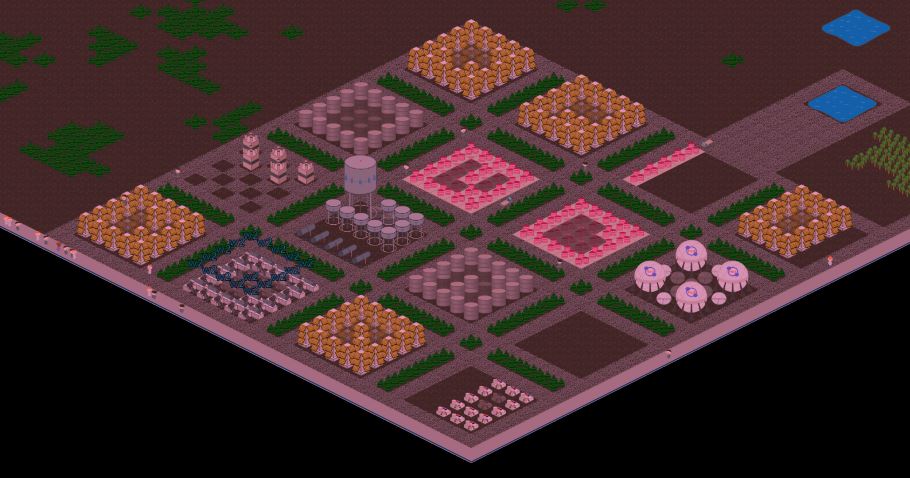 gewisse
2y ago
RE:Resources randomly deactivating
Sorry, maybe I should add some clarity. When I said I can watch the solar towers turn on and off, this also includes all the other items in my original list.

gewisse
2y ago
RE:Resources randomly deactivating
Sorry, maybe I should add some clarity. When I said I can watch the solar towers turn on and off, this also includes all the other items in my original list.

This seems to be an active occurrence, I can watch the game and see the Solar Towers turning off and on. This in effect turns off other resources such as ALL my Advanced Microchip Factories, Research Labs, etc.

I didn't see anything in the release notes about this. Did I miss something?

gewisse
2y ago
Production Priority scale beeing auto-reassigned by system
With the now-enforced 50-tile limit, and the issues I'm having with trying to keep my factories and other buildings full of workers, I've notice that the Production Priority scale is not be auto-reassigned by the system. No matter where I put the scale at, at some point later I notice that it's been reassigned back to middle and my employees are gone.

gewisse
2y ago
RE:Factories not being staffed
How is this 50-tile limit calculated? In a direct line from housing to building, or by the roads the colonist will walk?

gewisse
2y ago
RE:Factories not being staffed
I have to disagree with this as I now have more issues than before. So, to comply with the 50-tile-range limit, I've started to build more housing, but I now find that I have to increase the Production Priority scale to the limit to get any employees. Also, the movement of employees from one building to another is random to the point that a simple Greenhouse only 10 tiles away from housing looses all their employees. So far I have 70 unemployed colonist, yet many of my buildings are still unstaffed and I only notice this happens when my resources start to drastically drop.

gewisse
2y ago
RE:Factories not being staffed
Thank you Ansom, that worked. When was this restriction implemented? In all my past colonies, I used a 1950's Science Fiction Movie type of Utopia where there was a "living zone" and "working zone" and had no problem with the factories working.

gewisse
2y ago
Factories not being staffed
A couple of updates ago my factories fired all the employees yet let no one back in. I waited and hoped that the last two updates would fix this, even reinstalled the app, but to no avail. I started a new colony and still the Ore Refinery will not employ anyone. I even tried to turn the Employment and Production meters to max, but that didn't work either.

gewisse
2y ago
RE:Game Crashing Due To Simultanious Payment Triggers
I'm on Windows 10. While this crash happens at random, it usually shows up before I'm to the point of building a consulate/capital.

gewisse
3y ago
Game Crashing Due To Simultanious Payment Triggers
This was first happening with the League planets, but now also with the Unite Earth planets. After some random time, if the TAX and PAYROLL are timed simultaneously the game freezes and then crashes.

The TAX and PAYROLL windows obviously do not appear at the same time, but one right after another. Any button clicked on the first window will take you to the next window but by then the game has already locked up and then crashes.

Because you never got past the TAX/PAYROLL payment, the next time you open the map it will trigger the payment requests again, then then crash again.

In the end, you are no longer able to use that map and must start from scratch with another.

gewisse said:I started having this problem on March 3, 2018. Before this, all was fine, but on the 3rd I noticed that my Small Research buildings were not being supplied with workers. I started new colonies, even re-installed the app, but it's not working. I currently have 13 unemployed yet my Research building only has 1 worker and it's been 2 days since I created the Research building.

This creates major issues since without any research you cannot move the colony forward.

That would make sense if the Education Building was available in the beginning. However, I've only seen them much later on....AFTER doing much research. As it stands, with one Research Building and one employee, it will take a very long time before I can even do the research for the Advanced Hydroponics.

I see in the Release Notes where this change is mentioned. However, IF education is going to be a priority for research buildings, then the education building should be available early on. Otherwise, I'll have 50 unemployed people sitting around doing nothing but eating up resources and not being productive.

gewisse
4y ago
RE:Workforce Issue
I started having this problem on March 3, 2018. Before this, all was fine, but on the 3rd I noticed that my Small Research buildings were not being supplied with workers. I started new colonies, even re-installed the app, but it's not working. I currently have 13 unemployed yet my Research building only has 1 worker and it's been 2 days since I created the Research building.

This creates major issues since without any research you cannot move the colony forward.

Member
Member Since
March 7th, 2018
Welcome
Ape Apps, LLC is an independent software development company founded in 2010 by Brandon Stecklein. Over the years, Ape Apps has published over 400 apps and games across various platforms. You can get in touch with Brandon on Twitter or by leaving a post on his wall @bastecklein
Ape Apps
•Ape Market
•Ape Web Apps
•Soundboard City
•BackgroundBag
•Mad About Memes
•Ape Apps Store
•Ape Designs
App of the Day