Export structures only work once
Structures like the black market bazaar only work for one transaction, the menu just closes and nothing happens after the first one

DeepSpaceSteve
1y ago
Can't log in in-game
Pressing the chat login button sometimes does nothing, it happens on both PC and Android

DeepSpaceSteve
1y ago
Trees Disappearing on Region Maps
All the trees disappear when I log out on at least two of my worlds, including a water world and adandoned world. It's been happening for the last few updates and happened on both Windows and Android. On Android at least, If the trees are replanted they just despawn again the next time you open the game. There also needs to be a way to replant the type of trees on water worlds because they can't be replaced if they disappear.

DeepSpaceSteve
2y ago
RE:THE AFFINITIES?
Creative idea, I like it

DeepSpaceSteve
2y ago
Zolarg Roads and other
I have a few minor ideas for the game.
I've mentioned this before, the Zolarg should get antanium roads and some sort of antaura road, and antanium walls would also be useful.
The reptilians could also use some sort garbage pit or similar structure, I have an abandoned world colony and the garbage is just building up.
Also, the Statue of Unbridled Excess is still listed as the most expensive structure even though it's not anymore.

DeepSpaceSteve
2y ago
RE:Tourists ... those damn tourists
I'm sort of having the opposite problem, my amount of tourists just keeps increasing and nothing I do seems to make them leave. At best I've had about 5 leave out of 4,500.

DeepSpaceSteve
2y ago
RE:New Ideas for the terraformation aspect of my colony
I think at least a few of these ideas could be a good addition to the game. I feel like your suggestions are well thought-out and original, but complex and requiring a lot of changes to the game in some cases

DeepSpaceSteve
2y ago
RE:Lagging. Bad game optimization or what? - Page 2
I'm getting a lot of lag lately, my colonie's on mobile and I've had it since March 2017, but I only have 56k population.

DeepSpaceSteve
2y ago
Colonist Savings Resetting?
Whenever I have retired colonists their number gradually drops back to zero, and whenever the average savings is greater than the median, it always ends up dropping back to the same as the median. It seems like this problem has been in the game for ages. Is it possible colonists' savings end up resetting when you log out?

DeepSpaceSteve
3y ago
Crime Mechanic, and Other Stuff
There was talk a while ago about adding police and a crime mechanic, is that still planned?
Also the LIS and reptilians should get new import/export structures, I keep maxing out my resource storage and it can't be cleared out effectively with only being able to export in units of 100 or 250.
And one other thing, the Zolarg should be given a new road type that's built with antaura or something.

DeepSpaceSteve
3y ago
Reptilian Lava World Problems
I've been getting these problems on two different reptilian lava regions on Android. First, resources on reptilian lava maps always reset when you log out, but this eventually stops for some reason. The worker pathfinding also doesn't work, especially with obsidian bugs, which seem to try to reach the closest deposits instead of the ones they have access to 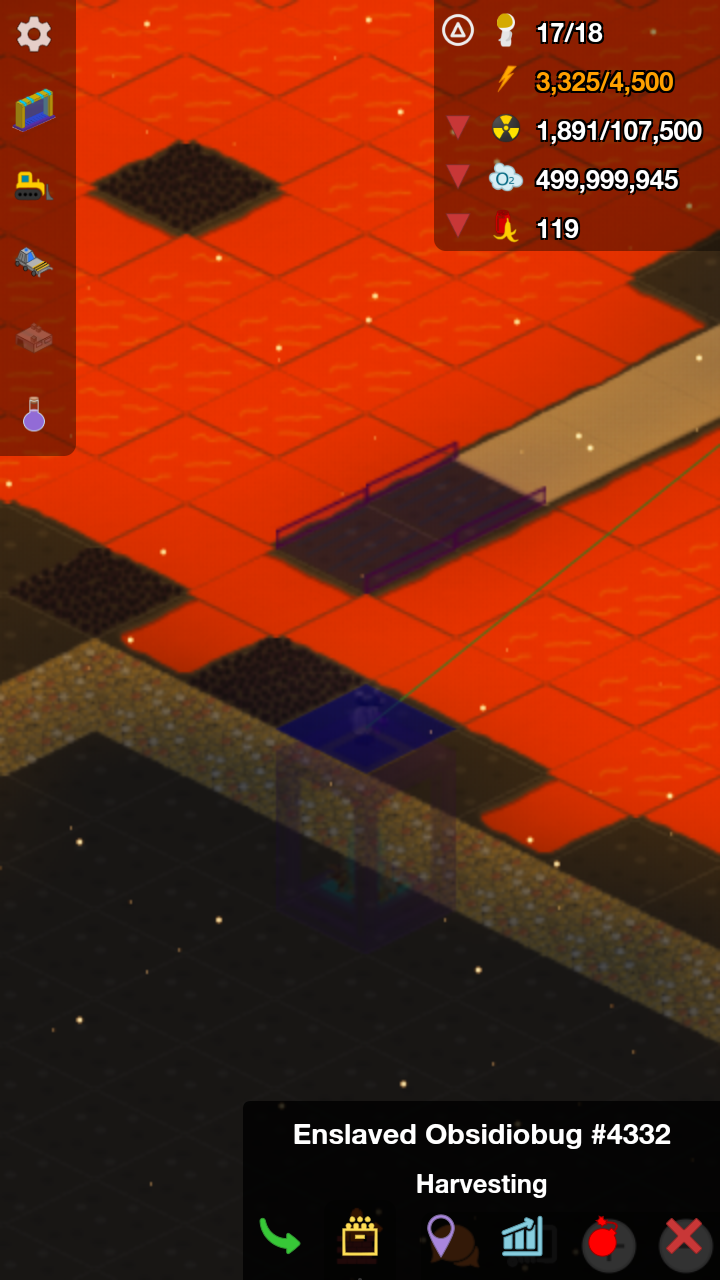 Also the construction bots sometimes will only move a few blocks from their parking spot and then go right back to it. These things happen whether multithreaded pathfinding is on or off.

bastecklein said:What is the population of the 5 minute freezing colony?

DeepSpaceSteve
3y ago
RE:Paying workers freezes game
As an update the game eventually unfroze, but it took around 5 minutes. It also happened on my other colony for about 10 seconds, which has a population of around 2500

DeepSpaceSteve
3y ago
RE:Aluminum Road Lit
I sort of like it as it is, because you have to choose between having a dark lit road or the unlit high-speed aluminum road.

DeepSpaceSteve
3y ago
RE:All waste management systems stop working
On Chrome my incinerators aren't working, but my recycling centers are still running according to the stats. On android it appears to be working, but incinerators don't show the text poppers unless they're newly built.

DeepSpaceSteve
3y ago
Paying workers freezes game
This has been happening to me the last few days and now my main colony isn't playable. It happens with both manual pay and auto pay, but it doesn't seem to happen if I don't pay the workers.

DeepSpaceSteve
3y ago
RE:My Colony v0.76.0 Released
Since starships are the last tech in the game, maybe a lower-level tech should be created to unlock trade routes, and the current faster than light tech can be used to reach an upgraded form of trading?

DeepSpaceSteve
3y ago
Unique LIS Space Elevator
Since the LIS doesn't have an export structure between the black market and the interdimensional portal, I think they should get their own version of the space elevator. I'd give it an Import/export amount of either 2500 or 5000, and allow immigration but at a lower rate than the UE space elevator.

DeepSpaceSteve
3y ago
RE:My Colony v0.68.0 Released
I mostly play on medium or large maps and I very rarely get crashes, so I think this should help.

DeepSpaceSteve
3y ago
Terrain Features
If the gameplay would allow it I suggest that some terrain features should be added, like craters and mountains. Unique structures could be built on each, like dome habitats on the craters and new types of mines for each. Different planet types would have different abundances of each feature, for example asteroids and lunar worlds would have lots of craters, and ice worlds and red planets would have a moderate amount. Maybe you could spend resources to remove the features by filling in the craters or plowing the mountains away.

Member
Member Since
October 10th, 2017
Welcome
Ape Apps, LLC is an independent software development company founded in 2010 by Brandon Stecklein. Over the years, Ape Apps has published over 400 apps and games across various platforms. You can get in touch with Brandon on Twitter or by leaving a post on his wall @bastecklein
Ape Apps
•Ape Market
•Ape Web Apps
•Soundboard City
•BackgroundBag
•Mad About Memes
•Ape Apps Store
•Ape Designs
App of the Day