Way back in 2012, I released a game called Level Up RPG, which was my first cross-platform game based on Web App Core. Level Up became my first game to gain any sort of popularity, and spawned a handful of spin-off games, including Ninja Level Up and the Deimos Trilogy (which in turn spawned the My Colony Universe of games). Around 2015, I started planning out the story and concepts for a sequel called Level Up 2 - The Tower of Jupiter, but never really got too far beyond the planning stages. Then last fall, I started doing actual work towards bringing the concept to life, built on a new Raycasting engine I started building in my spare time (you can follow the early development of the Raycast engine with this playlist on my YouTube channel). And now finally after about seven years of on-again off-again planning and development, Level Up 2 is ready for it's "official" announcement! 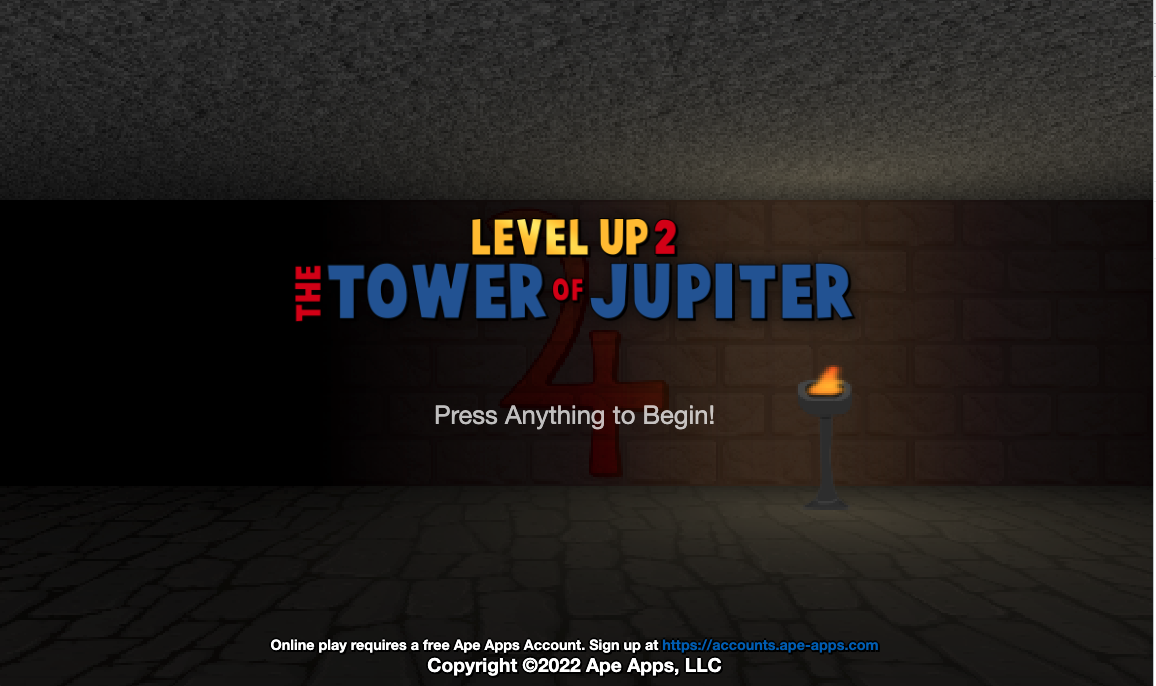 In terms of story, scope and scale, Level Up 2 is easily going to be the biggest game I have created to date. The story takes place after the events of the original Level Up. Pete, the potion merchant from the original game, has discovered a mysterious artifact called Jupiter's Rock which has given him immense unholy powers. Drunk on power, Pete lays waste to the Epic Tree and in it's place constructs a massive tower of evil (the Tower of Jupiter) from which he unleashes a reign of terror over the realms of Level Up.

Gameplay in Level Up 2 will feel familiar to players of the original game. I am designing it to be as easy to play as the original (particularly for mobile quick pick-up and play) while at the same time expanding the concept with pretty much all of the long requested features I received from the original game.

In the original Level Up (and all games based on it's engine), each "world" was just a static background image that different enemies and items would be drawn on top of as you progressed. In Level Up 2, the worlds are rendered using the aforementioned Raycasting engine. You still move on a "track" in a linear fashion, but you actually now move forward in a 2.5D world (think original Doom/Doom2).

Unlike the original game, Level Up 2 now has towns, waypoints, and the ability to revisit areas you have previously visited. These new abilities lead to another new feature, Quests. Different NPC's will be able to give you both main and side-quests which you can accomplish for gear, glory and profit, many of which may require you to do back and revisit areas which you have already been through.

Another big new feature of Level Up 2 is online multiplayer! Friends will be able to join your game and help you along your current path. Your character is saved online, and items/loot/experience you gain while playing in a friends world will carry over to your own game. This allows you to trade items with other players, or if you have a friend, you can help rush them through the earlier parts of the game, or fight a particularly hard boss.

In the original Level Up, all fights were 1v1. In Level Up 2, not only can you have a party of your own (your friends, or NPC's/pets which may join your team), but the enemies may also bring their friends along for the fight. Some boss fights might see you taking on a whole horde of enemies at once.

The new rendering engine allows for some cool special effects that were just not possible in the original game. Magic spells and enchanted weapons are now accompanied by their own special effects. You will also now see your weapon/shield in your hand while you play the game, one of the most requested featured from the original. Other players will also be able to see your items equipped on your character. You can also completely customize your in-game character by selecting a Token created using the My Tokens app.

Another new concept in Level Up 2 is that the game comes in three different "editions" or "flavors." When you first launch the game, you are automatically randomly assigned one of the three editions. The game will then be slightly different, depending on which edition you are assigned. Some spells, items, enemies, areas will only be available on certain editions. This gives an added benefit to joining and exploring a friends world on multiplayer.

Moving on, Level Up 2 also introduces skills classes and specializations. You can now train and specialize in certain types of weapons (daggers, long swords, etc) and your power with each weapon will depend on your skill. Skills will improve as you use each weapon class. This means that, unlike the original Level Up, picking the best items for your character is not as simple and straight forward as just picking the item with the best overall stats.

Level Up 2 is being designed for Desktop, Mobile and TV with full touch/keyboard/gamepad support. A lot of the UI design, interface and core concepts I am borrowing from Morrowind/Oblivion, which were my two favorite games from the Xbox and Xbox 360 respectively, so a lot of inspiration is being taken from there.

I am pretty excited about Level Up 2, just because this is a game that I myself am really looking forward to playing, especially with a party online. My goal is to release this thing on or as close to November 11, 2022 as possible, since that would mark the 10 year anniversary of the original Level Up. I hope to have most of the core engine concepts wrapped up sometime next month, which leaves me several months after that to just pump out content for the game (which it is going to have a lot of). There should be a beta available for the game this summer. As I mentioned before, this is going to be the largest game I have ever released, and I really think that people are going to get many, many hours of fun out of it. So stay tuned for more, and I will let everyone know when the beta is available this summer!