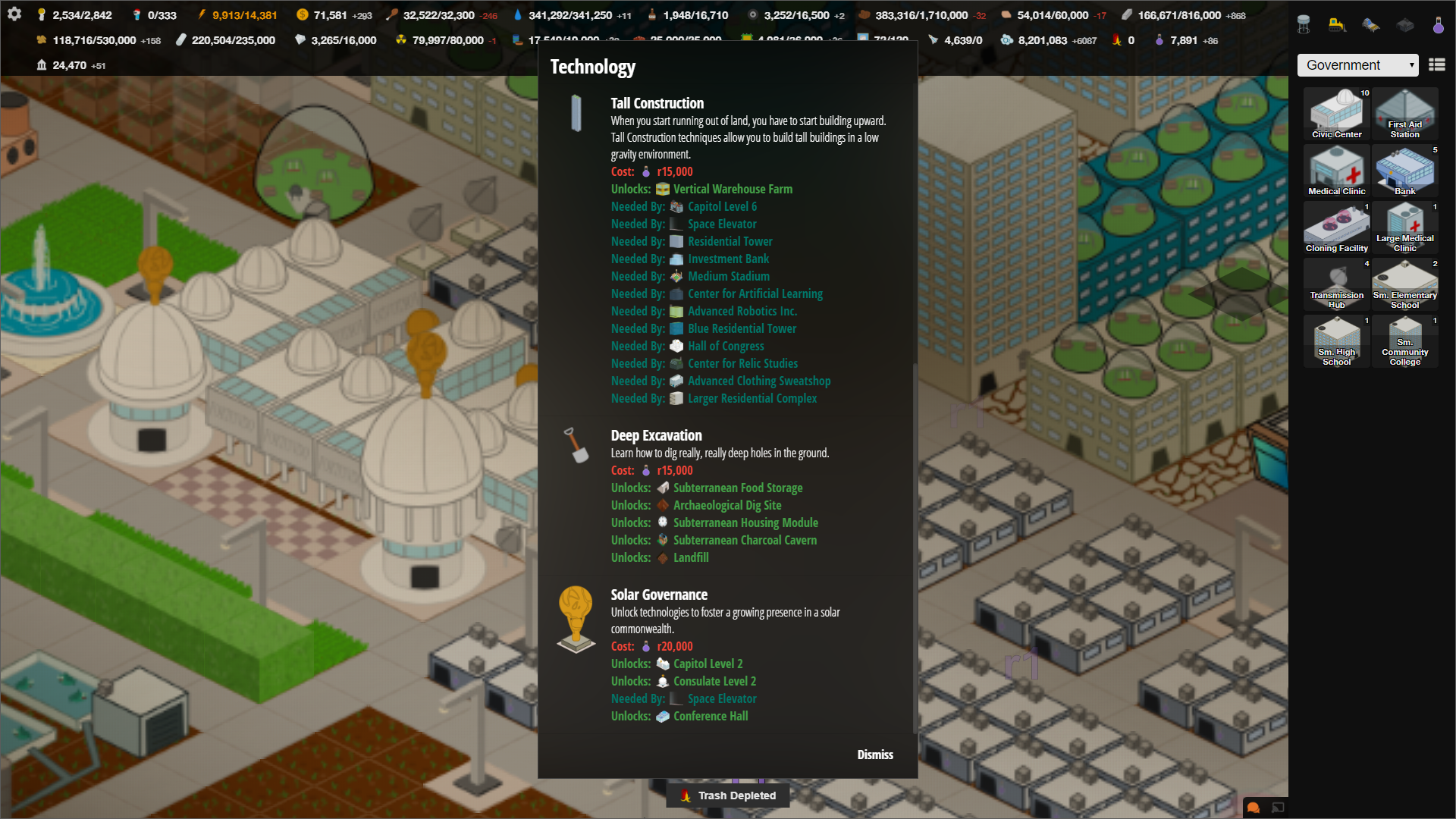 Same here. I already have a Lv 2 Consulate, yet, it's listing Solar Governance once again for research. I only save the colony before exiting the game.

(Playing on Ape Apps Launcher)If you close your colony, and open it after a couple minutes, for some reason it makes all workers (that should be working) go to their workplaces.

Invincible said:you can check their savings. it its too high, they wont work. it usually stays stable around 40-60 but i have faced the problem when their savings went over 150-200

I will check, but I still think it's a bug, since they "suddenly" go to work when I check the building stats.

EDIT: After starting the game today, it went all back to normal, but I suspect if I do something big like a Fire Drill or change the workload, they might bug themselves again.

bastecklein said:I will give it renewed focus on the next update

Are there any logs or anything I can do to help you diagnose this?

AKANexus
3y ago
RE:fed up with settlers
I'm having a similar issue... I've just built my Lv 2 Consulate and set Light Workload and did a Fire Drill to relocate some workers to a new housing complex next to some factories. Most, if not all, of the buildings now have all settlers off duty, even with settlers at 95% energy. The weird thing is that if I open the building's properties window and look at the workers list, some of them suddenly are on duty, and the building starts functioning. Is that a bug?

Wubman said:Regions are comprised of a lot of smaller cities you build in, each of those cities produce based on the last couple minutes of productions and then carried over to wherever you go next.

I see. The resource pool is updated with the other regions' production frequently?

AKANexus
3y ago
Question about regions
I'd like to understand how the regions system work better.
I have an on-going colony on my first region. Currently self-sustained. If I create a new region on the same map, does the original region keep producing their goods while I set up the new region? What resources/people/cash is shared between regions? Do they work like Sim City's neighborhoods, where a citizen could live on a hood, but work on another and commute between them? For I was interested on creating "districts", as in having a region/district dedicated to industrial prodution and/or mining, another dedicated to advanced manufacturing and food and water extraction, and another for living quarters and tourist traps, so the regions would support each other. Is that possible?

AKANexus
3y ago
RE:My Colony v0.76.0 Released
Sounds fun. Unfortunately, the update, somehow, corrupted my savegame on the Windows Store version, and, even though it was an online colony, I can't recover it... Time to start over again...

AKANexus
3y ago
RE:Cannot Login
I never even thought that could be it... I had exclamation marks, dollar sign and both parentheses on my previous password. I changed it to a numbers and letters only and it worked!

Thank you so much, and sorry for interrupting your travel.

AKANexus
3y ago
RE:Cannot Login
@bastecklein Could you please shed some light on what might be happening?

AKANexus
3y ago
Cannot Login
I've purchased My Colony via Google Apps some time ago, and I've just created an account here so I can play it on my desktop as well. However I cannot login on the website on a desktop (I get a "Login failed!" error), neither on the app (A red "Login Failed!" error). I can, however, log on the website on my phone.

What can I do to fix this? 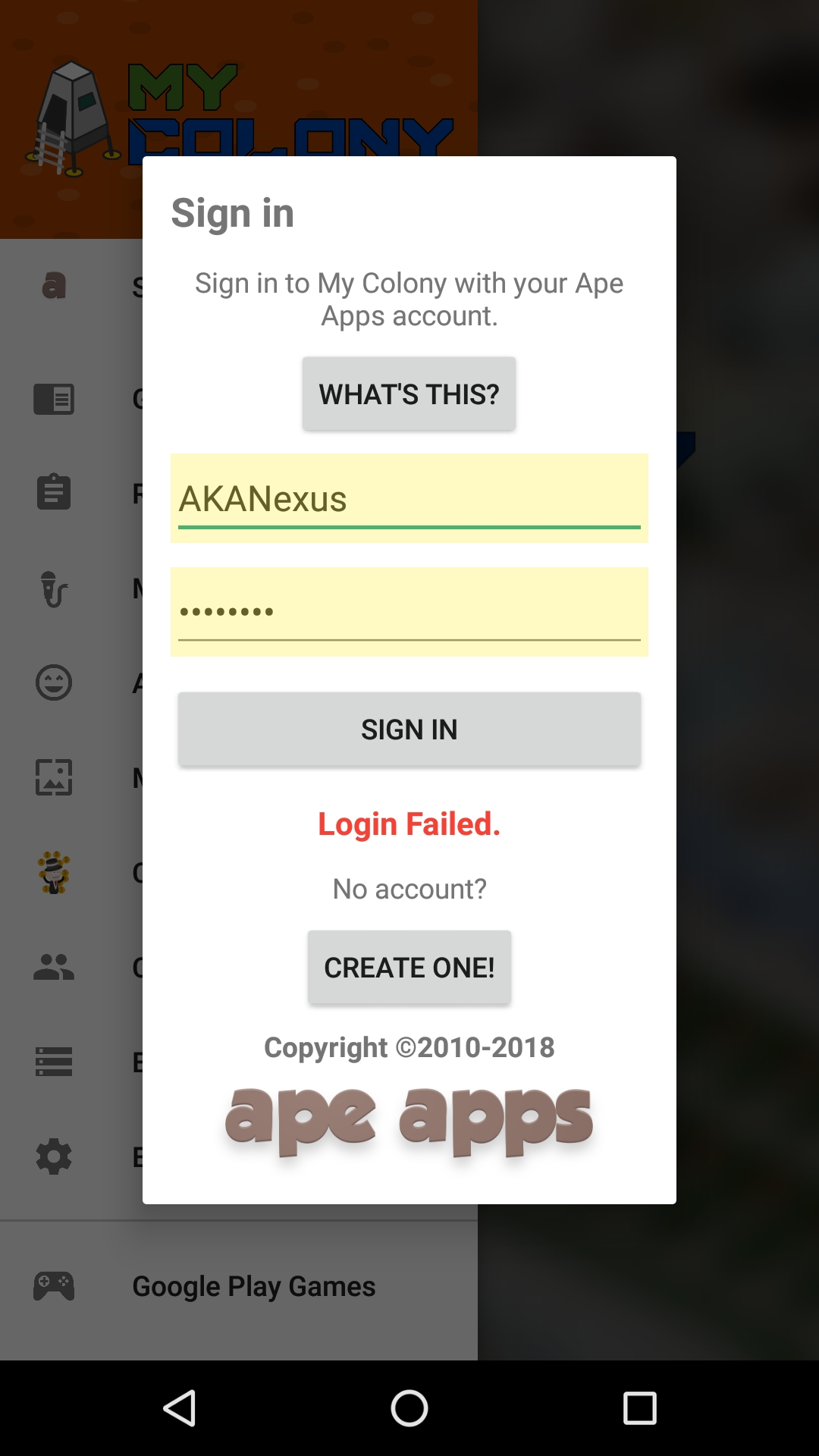 Member
Member Since
November 10th, 2018
Welcome
Ape Apps, LLC is an independent software development company founded in 2010 by Brandon Stecklein. Over the years, Ape Apps has published over 400 apps and games across various platforms. You can get in touch with Brandon on Twitter or by leaving a post on his wall @bastecklein
Ape Apps
•Ape Market
•Ape Web Apps
•Soundboard City
•BackgroundBag
•Mad About Memes
•Ape Apps Store
•Ape Designs
App of the Day