List of Water World Bugs ive found
-Things like forest rovers and other rovers like to randomly descend from the sky.
--All units really suck at pathfinding and will try to go over water and will get stuck on buildings, ignoring a bridge. This is really really annoying because the units will not move or build where you need them to.
-Uranium Enrichment Plant is completely invisible, still uses water and energy but cannot be seen or interacted with at all; can be destroyed.
-Bulldozers will leave terrible jagged cliffs.
-Buildings will not have employees despite having 1000 jobless people and despite the building being right next to housing.

DoYouHaveAnyOats
2mo ago
Education
Whoops, forgot to ever put these here

DoYouHaveAnyOats
2mo ago
RE:Units dropped randomly on water worlds
Can confirm, happened to me too, for me it seemed to happen when the units randomly decided to pathfind into the water, then they would drop to their parking spot.

DoYouHaveAnyOats
2mo ago
RE:Gold Fracking Operation
Please God Bast Add this, Literally on water worlds we have to island hop to get any meanful gold. It takes like 2 hours just to get 5k gold with multiple gold labs. PLEASE. Maybe if you want make it water world exclusive or something like it can only be used with salt water, but pleaseeeeee

DoYouHaveAnyOats
2mo ago
RE:My Colony 2 v0.19.0 Released
Glad my AMOGUS Mod got in that screenshot

DoYouHaveAnyOats
11mo ago
Colonist Sizing Options
Hey, with the upcoming release of 0.19 bast has mentioned that colonists will be smaller, I think it would be a cool addition to be able to change the size of colonists from either old style (absurdly large) to the new style (realistic). Maybe more of a joke option than anything.

DoYouHaveAnyOats
11mo ago
AMONGUS MOD SUS (IMPOSTER)
HELLO GUYS DOYOUHAVEANYOATS HERE, COMING FROM THE LIVE OATS STUDIO MAKING QUALITY MY COLONY CONTETNT I BRING YOU OUR MASTERPIECE, AMOGUS MOD.
On my mod shop, and here VERY SUSSY AND IMPOSTERY AND BASED AND AMOGUS
*Bast just ban me from the forums at this point

DoYouHaveAnyOats
11mo ago
Issues converting to .obj
Hello, when exporting a large voxel model to .obj it doesnt work, it loads and then does nothing. This is the file used

DoYouHaveAnyOats
1y ago
Terra Nova 4x Info?
In the latest episode of the MyC Podcast Bast mentioned that it may be out in January, just wondering if there was any info on it. Thanks

DoYouHaveAnyOats
1y ago
GBT Idea
If interplanetary trade is added, it could be similar to the GBT. The GBT in its current state is overran with massive offers and the like, so what if it was broken up. The GBT could be a much later building by needing starships. It could also take time as opposed to being instant. It could be broken up into sections based on a towns level (1,2,3) or a trade level. This would let massive trades be contained to people who can actually pay them, while leaving small/new towns with smaller trades.

DoYouHaveAnyOats
1y ago
Education Mod(?)
What is up fellow kids! Time to hit that school grindset.

Disregarding the above, this addon adds 2 buildings, Elementary School and Highschool. They both add education and seem to work! Its pretty light but I think it fits into the game pretty well. Thanks! 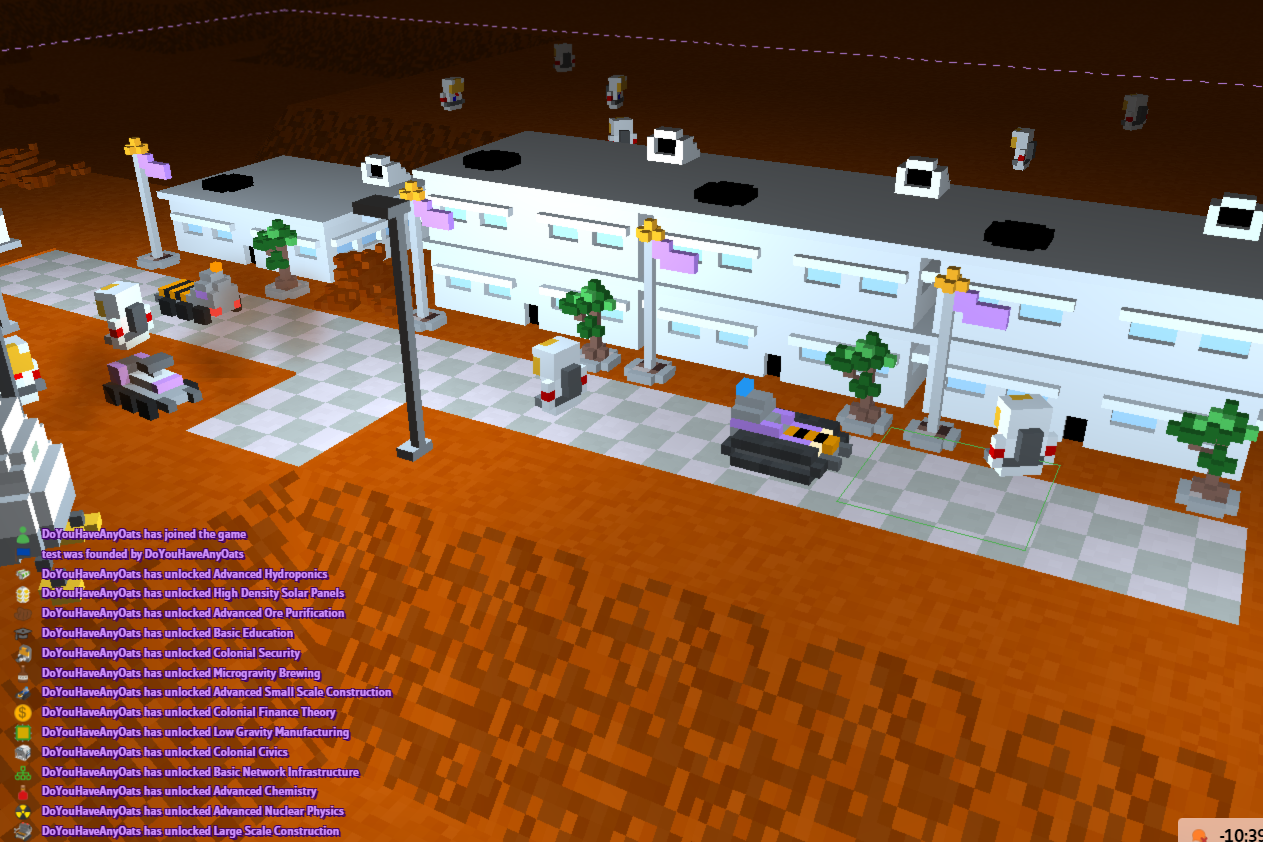 DoYouHaveAnyOats
1y ago
Mod Block
Its a block that kinda just gives you a ton of everything so you can test how your buildings look and build and all that.

DoYouHaveAnyOats
1y ago
RE:Bridges Bugging
Looking back, it seems that bridges can only be placed inside of claims on the end of the water, it would be very appreciated if it explained this.

DoYouHaveAnyOats
1y ago
Earth to Lander
Help me, ive been searching for my lander for years, I was a fool and did not place it down. Please add a bookmark for a unlanded lander.

Sobeirannovaocc said:These are all good ideas, just adding on the resource drain from building occupation : there could be military units specialized in pillaging, like a military transport rover of some sort. Once an enemy storage facility is occupied, these units would start going back and forth transporting enemy resources to a friendly storage. That way it will take some time to drain the other player's resources.

Also on the aftermath : what do you physically gain from the war ? Apart from domination over the other player ? Buildings ? Settlement ?

There should also be a smurfing prevention (if I use the term right) : if you declare war upon a very weaker enemy, your approval drops super fast and you won't have benefits declaring war.

All really good ideas, with smurfing prevention some strong deterrent must be in place to prevent one nation from just dominating, admittedly the aftermath is relatively unfleshed out. The original idea is to fulfill the original demands list or some sort of compromise. One thing that could be very dangerous is actually giving up your settlement, as that could lead to a smurfing problem. With the losing side likely in turmoil, they would likely be more willing to cede to the winning nation. Things like joining a nation (if those are added), payouts in resources, or maybe giving the output of factories to the winning nation are all good possibilities.

DoYouHaveAnyOats
1y ago
Water World Natives
It seems that the desert is getting Native populations, and to prove that Water World is the best I made some of my own. It would be very cool if these were added so that we could have more native populations. 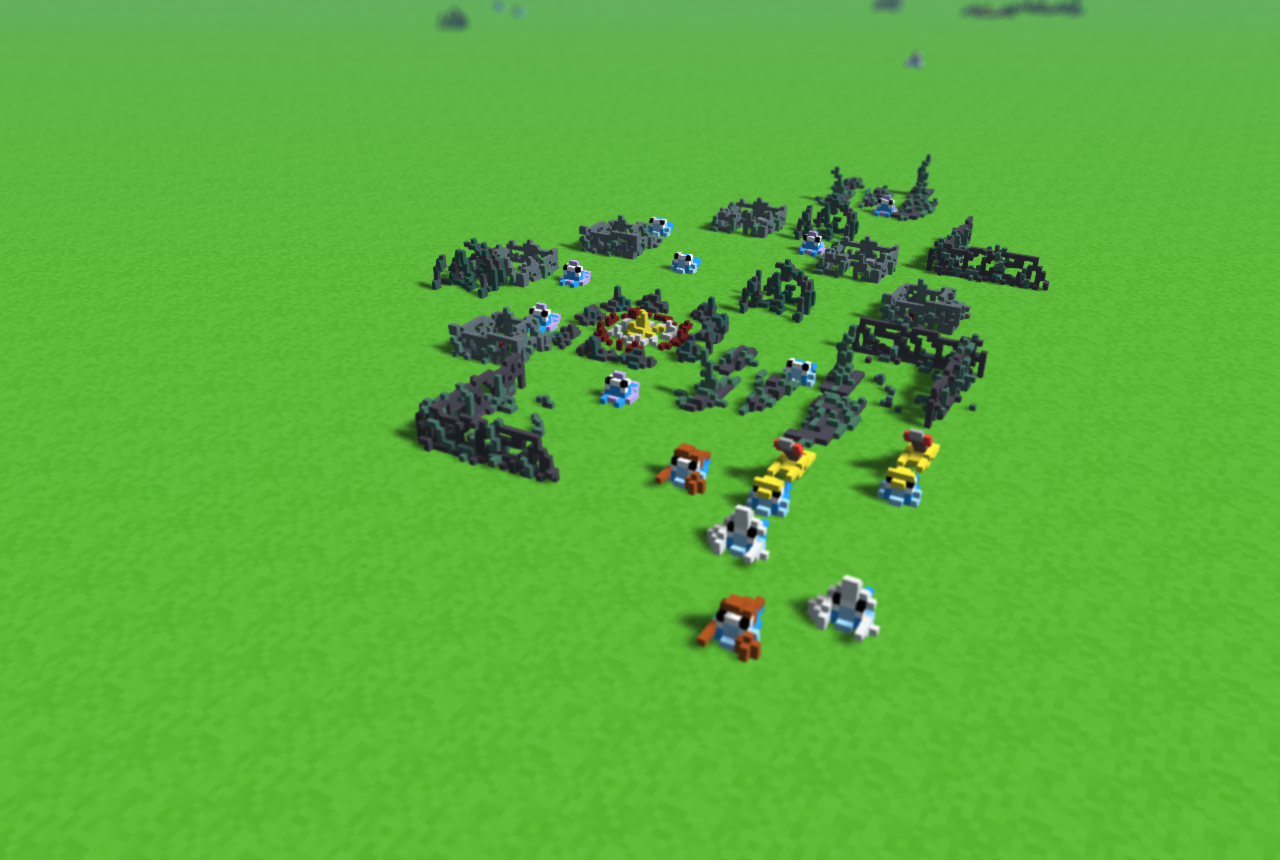 DoYouHaveAnyOats
1y ago
RE:Help/General Questions-
1. Dont think there are achevements, and anyone can join your game regardless if they have the mod installed,
2. I think the largest (to my knowledge) is the section in the NOZ discord (it is not primarily a My Colony Discord)

DoYouHaveAnyOats
1y ago
War Overview (Suggestion)
My ideas about how player vs player war could be implemented into MyC2.

How war is fought:
War is primarily a game of economic strength, it is won by the opposing party ceding. The main goal of war is to occupy buildings, this is done by troops doing damage to these buildings (all except a few buildings cannot actually be destroyed**, after war the occupied buildings are unaffected). Each building would have its own value for how much damage it can take before occupation, this is similar to the decay aspect in MyC1. Buildings can be repaired mid battle by using primarily money. When a building is occupied it is functionally nearly identical*** to a building that has been turned off (red on/off button), factories do not produce items, utilities do not produce those utilities, research stations do not produce research, places that produce rovers/troops cannot. This is an attempt to starve out the city and cause the owner to agree to terms. Troops would target other troops first, then it up to attacking settlement to direct them to what buildings. Troops would also be similar to buildings, having a set amount of damage that they can take, however they disappear when defeated.

**Examples of buildings that can actually be destroyed are walls, and bridges, this is to future break down cities ability to continue to function**

***Major examples include Storage which would slowly decay materials that they cannot hold. and Housing which would stop that amount of people from working (if an occupied house holds 4 people, those 4 people would not hold a job, {depending on how the MyC2 engine assigns jobs to workers, this could be cut})***

From an offensive perspective:
Your goal is the quickly occupy key areas of interest and get the enemy to cede. Being constantly at war/being in a war for a long reduces your approval rating and can cause workers to stop going to work. For every troop/unit lost your rating drops slightly, for every troop/unit gained your rating increases slightly.

From a defensive perspective:
Once war is declared on you, you can enter the attacker's territory, you also have the advantage of being able to reoccupy buildings. From a defensive players' perspective, you want to drain the enemy of enough resources that they themselves leave. Buying time is important to reduce public morale.

Aftermath:
Once a side has conceded they can vote to end the war, assuming both sides agree to end the war, the winning side can issue demands, failure to comply can start this all over again. Materials, unclaimed land, money, and units can be given.

Ending Notes:
Obviously, this would need a lot more work but this is (in my mind) an appropriate baseline. GeneralWad has some very cool models that could be perfect for this kind of thing. This would add another layer of player and player interaction. I really do want feedback on this, suggestions, or anything that yall think about this. Thank You!

DoYouHaveAnyOats
1y ago
RE:Guide for Creating Voxel Models
might pin this

Member
Member Since
February 11th, 2019
Welcome
Ape Apps, LLC is an independent software development company founded in 2010 by Brandon Stecklein. Over the years, Ape Apps has published over 400 apps and games across various platforms. You can get in touch with Brandon on Twitter or by leaving a post on his wall @bastecklein
Ape Apps
•Ape Market
•Ape Web Apps
•Soundboard City
•BackgroundBag
•Mad About Memes
•Ape Apps Store
•Ape Designs
•Official Discord Server
App of the Day