[NOZ]Segment_#96657_K7
Recently came back from the dead and decided to actually do something with my colony except leave it idling all the time.
Everyone who joins is welcome. We are a community that loves to help others and won't turn you down if you need help.

Come to the discord server too! We have a great leadership and tons of roles and events.
https://discord.gg/2g8nB2

Acu said:
Wait. You mean that you got premium version illegally? Or am I wrong maybe?

Ehm... you're about a year late and no a friend just bought another key and gave it to me as a gift.

DragonCrypt
4y ago
RE:Announcing My Colony Steam Edition
If we've bought the game already would we be able to get it from steam or will we have to buy it again?

DragonCrypt
4y ago
RE:Native Client Update
Ah, understood. I shall keep that in mind for the next time i update.

DragonCrypt
4y ago
Native Client Update
I didn't know where to put this so i thought this would be the most appropriate place.

Ver 0.6
Native Client.x64
Windows 10 pro
Description:
Since 0.59 i have been unable to update using the in-game updater. Whenever it gets to 100% and shows that the update is ready to be installed, the button at the top of the screen doesn't function. I have tired restarting and re-downloading several times but it never functions. In the end i have to manually uninstall and then download the game from the APE market. It's quite an tedious process and it takes waay more time than it normally should.

DragonCrypt
4y ago
Student loans
I don't know if this has been suggested after the schools were implemented, but it would be great if we had a student loan option.
This way the students can also be classified as jobs and we won't have to worry about them protesting about unemployment and they will also get money to buy food. Since in order for them to be students, we need to have more people than working places.

DragonCrypt
4y ago
RE:File extensions
Hmm...
Because the thing is, my Launcher is up to date and im able to connect to other online games, but those 2 specifically cannot be connected. My guess is an auto-ban on those colonies but idk why. Your ideas?

DragonCrypt
4y ago
RE:My Vehicle Can Fly
It's a graphical glitch.
Check if you haven't turned "Check render distance" off.
If you have then turn it back on if you want to have a visual glitch free game. However take notice that this will impact you computer performance. If you already have it turned on then there is nothing you can do at the moment. The game is still in early beta so expect things like this often, as more and more features are introduced to it!

DragonCrypt
4y ago
File extensions
While browsing though my save files i noticed the following.

@bastecklein is this a new labeling system by the game?
Because these save files can no longer be loaded as the game exits with the error message
"Unable to connect to game server. Online games require an Internet connection to play."

DragonCrypt
4y ago
RE:Antiquitas v1.7.0 Released
Sweet. Can't wait for more. If i can make a suggestion how about adding a (premium) statue of Asterix and Obelix to the Gaul race for that cartoon reference?

DragonCrypt
4y ago
RE:Antiquitas v1.4.0 Released
Sweet, will look out for the new update. May i make a suggestion for the forum?
Let's try to make different subsections like with the My Colony one. It should help with organization i believe.

DragonCrypt
4y ago
RE:Premium account
it's a bug that was encountered in Antiquitas as well. Your best bet is to use either the .exe version of the game or the Chrome version, until Bast figures out what exactly is causing this incompatibility.
My guess is something in the most recent engine Changes.

When i try to pay the tax while not having enough money, the error message that should pop up just appears as a blank box with no text.

DragonCrypt
4y ago
RE:Premium version Bug
Found that out too.
Will stick to the .exe file since the windows store version doesn't want to accept premium for some reason

DragonCrypt
4y ago
RE:Premium version Bug
Yeah, it does.
I actually reset my PC and now it's fine
I guess it was actually the server that had to process the fact that i have premium, before it allowed me to buuld those buildings.

DragonCrypt
4y ago
RE:No buildings - squares?
lol you activated the transparency mode lvl 2
Simply click on the transparent building icon above the research icon(the purple head)
it should bring things back to normal 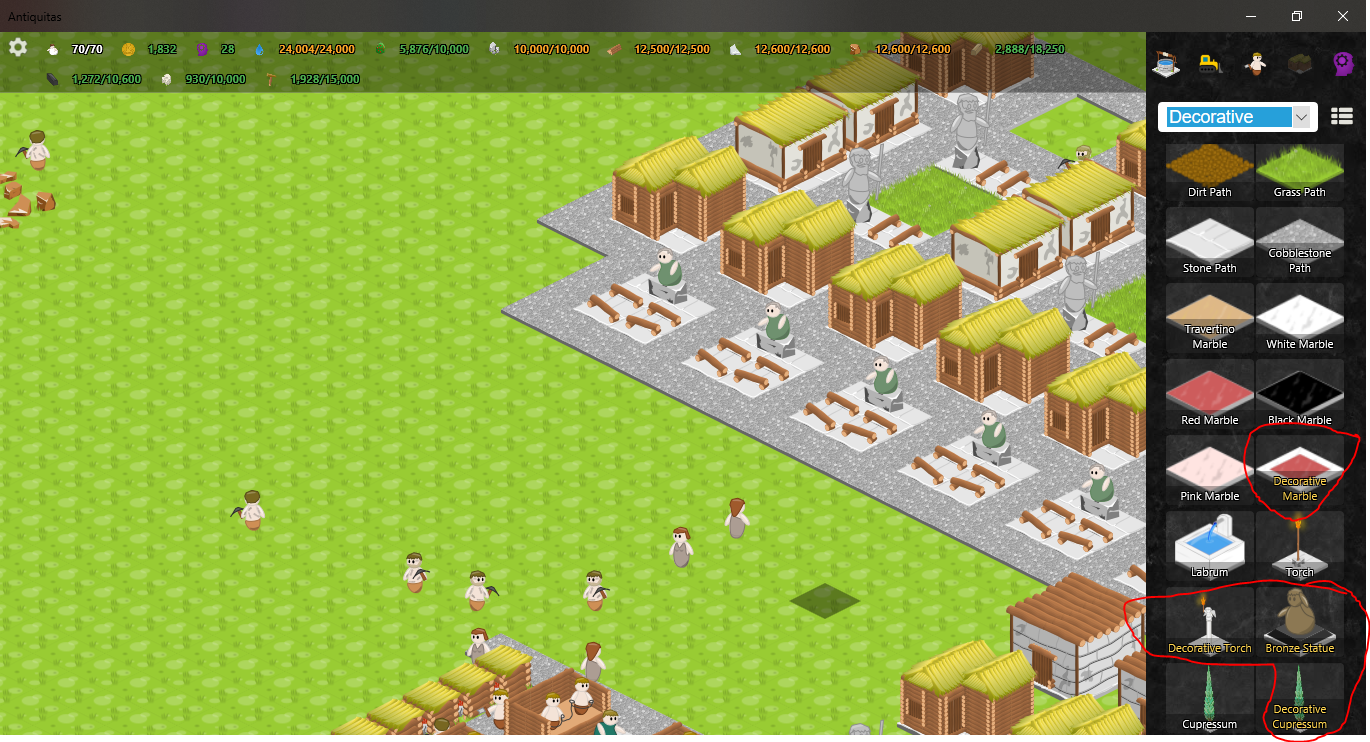 After i got one of the 250 free premium upgrades i noticed this when i tried to create a new city: 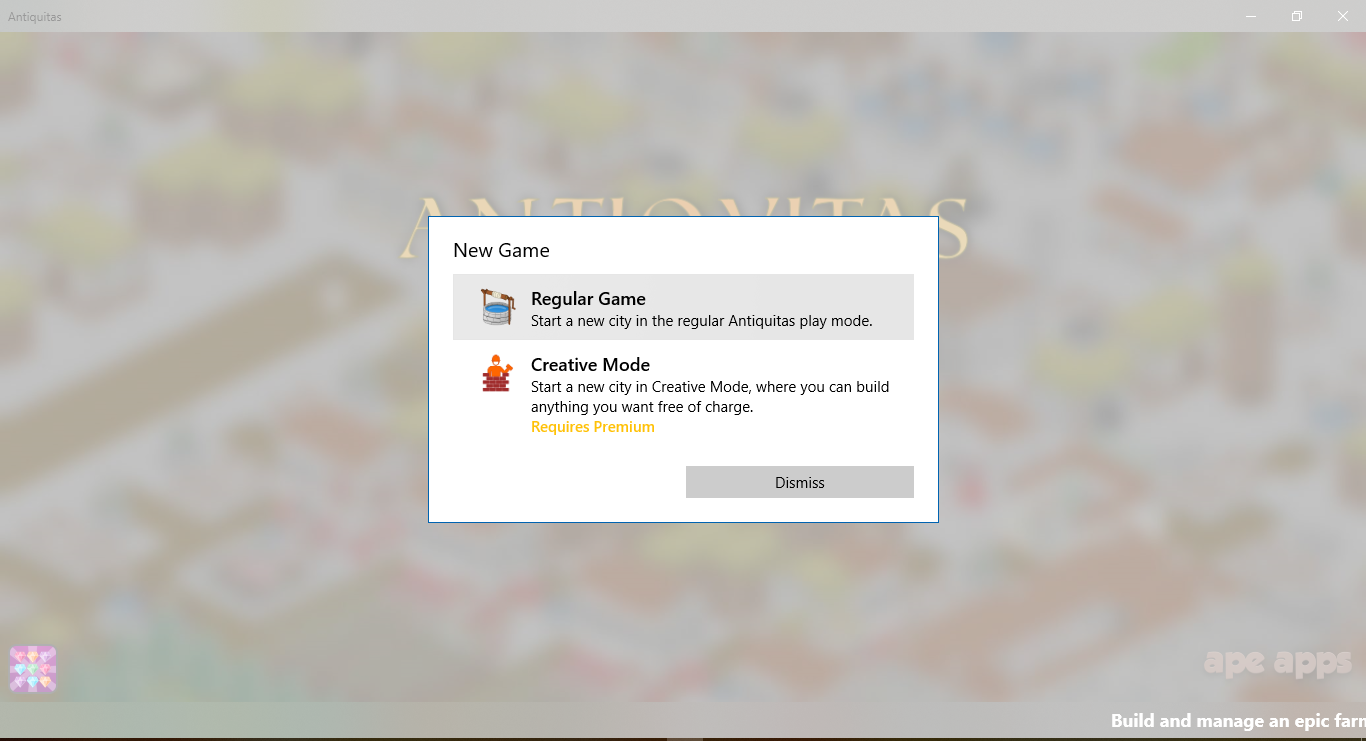 As you can see, i have the premium but i can't use the sandbox world. (due to the lack of ads)
My believes are that this is due to the fact that the game is new and a creative mode isn't supported yet.
Anyone else?

DragonCrypt
4y ago
RE:Antiquitas v1.6.0 Released
@bastecklein I think it will be a fun addition if you make a premium statue of Asterix and Obelix from the cartoon/comic book

Member
Member Since
September 11th, 2017
Welcome
Ape Apps, LLC is an independent software development company founded in 2010 by Brandon Stecklein. Over the years, Ape Apps has published over 400 apps and games across various platforms. You can get in touch with Brandon on Twitter or by leaving a post on his wall @bastecklein
Ape Apps
•Ape Market
•Ape Web Apps
•Soundboard City
•BackgroundBag
•Mad About Memes
•Ape Apps Store
•Ape Designs
•Official Discord Server
App of the Day