bastecklein
Developer
Posts: 2855
744
0
2y
#1
Today I have released a little different type of app than what I normal make - aaZDoom Launcher, the Ape Apps Launcher for ZDoom!

So what is this? Well a couple of months ago my son got into playing old-school Doom, and he has been playing it using GZDoom on his old Macbook Air. Often he will want to play multiplayer with me, but setting up a LAN game for him is sort of a pain since you have to set everything up using the terminal. There are launchers out there that do this automatically, but most of them are for Windows.

I remembered when I was in high school, my friends and I would set up multiplayer games (over dial up modem) using the Doom 95 launcher for Windows 95, and it was very easy to set up and use. So I looked around at launchers available, trying to find something similar and hopefully cross-platform (since he is on a Mac and I am on Windows). I really didn't find anything I like so, being a developer, I decided to just make my own. So today I present to you the aaZDoom Launcher! 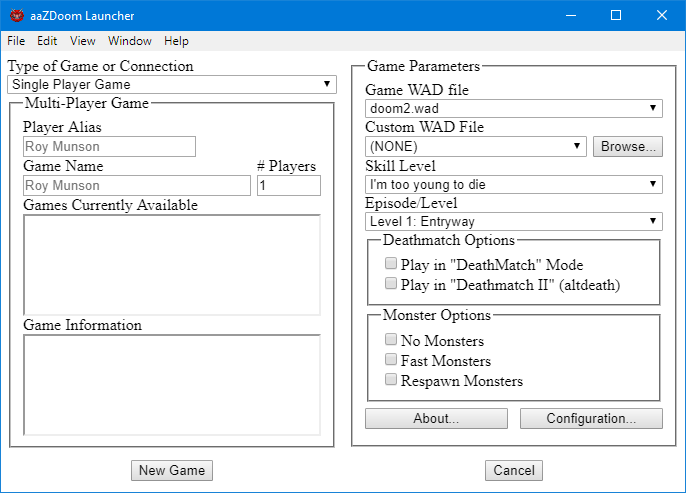 The aaZDoom Launcher is modeled pretty much exactly after Doom 95, except it works with ZDoom ports (GZDoom, QZDoom, ZDoom), and it is cross platform (Windows, macOS, and Linux). To get started, all you need to do is specify the location of your ZDoom executable, the location of a folder containing your main game wad files (IWADs), and optionally, a folder containing all of your custom wad files (PWADs). Makes starting a ZDoom session nice and simple.

Since the main purpose of this project was to make playing multiplayer with my son a bit easier, I have baked in a little feature that helps with this. If you are on a local area network (WiFi or Wired LAN) and you start a multiplayer session, other aaZDoom Launcher clients will be able to automatically find your game while it is in the "waiting for players to connect" phase, so you do not have to type in any IP addresses or computer names in order to join a network game. The "server" will also transmit information about the game to the clients, such as which IWAD and PWADs are being used, so you can see before joining if you have the necessary files on your computer.

It occurs to me that it would be trivial to expand the multiplayer game setup to include online players as well, since I already own a bunch of server infrastructure that could be used for signaling, but as long as it's only my kid and I using it, I don't see the need to really implement that functionality. I thought I would make the launcher public though and see if there is any interest in this type of project before deciding if I want to spend any time adding more features to this.

So anyway, if you like playing Doom and use one of the ZDoom ports, feel free to give this a try. It works on Windows, Linux, and Mac, and you can download it for free from the Ape Market at the following URL:

If you find any bugs or have any issues or suggestions, you can let me know here. I really only spent a few hours making this, so I'm sure I overlooked something. It works good for my personal use though, but if other people are interested in using it as well, I can easily add more goodies. Just let me know. Enjoy!
Owner of Ape Apps, LLC