bastecklein
Developer
Posts: 2855
744
0
1y
#1
With Apple slated to transition it's computer processors from Intel to ARM, I have decided to add ARM CPU support across the board for the Ape Apps Launcher. When you go to the Ape Apps Launcher download page (https://market.ape-apps.com/ape-apps-launcher.html), you will now be presented with the following options: 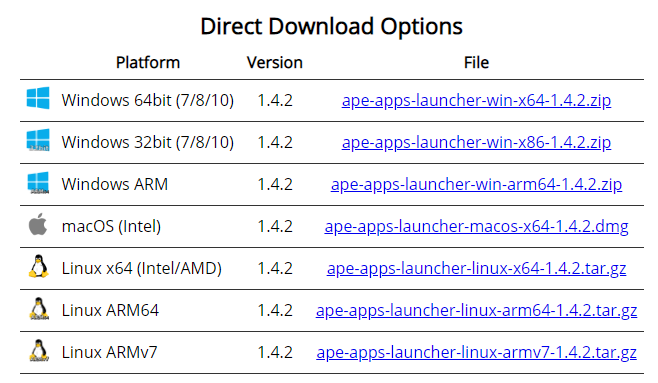 These new download options should let the Ape Apps Launcher (and other software/games in the months to come) run on pretty much any desktop device. This includes new Windows on ARM based laptops (like the Surface Pro X), as well as Linux ARM devices, such as the Raspberry Pi. In fact I was sort of getting an idea to add some new capabilities to the launcher that would let it serve as a media center application when connected to TV devices, allowing you to build a cheap media center PC out of a Raspberry Pi that can also play the entire Ape Apps lineup using a gamepad. But that's for another day.

Anyway, that's what's new with the Launcher. As Apple computers, and probably more Windows computers in the future start embracing both ARM and Intel architectures, I will make sure that your favorite Ape Apps games and programs work on whatever type of device you happen to be using!
Owner of Ape Apps, LLC