My Colony 2 v0.21.0 is now available on the Web, Windows and the Ape Apps Launcher and should be hitting Android and iOS over the coming days. This update fixes a couple of bugs introduced in the last release and makes some pretty big changes that could alter the course of how you play MC2 over the coming months, so let's jump in and take a look!

The first big change in this update is a new feature called Universe, which will allow you to "join" your game to other players' games to create a sort of peer-to-peer network of global My Colony 2 servers. 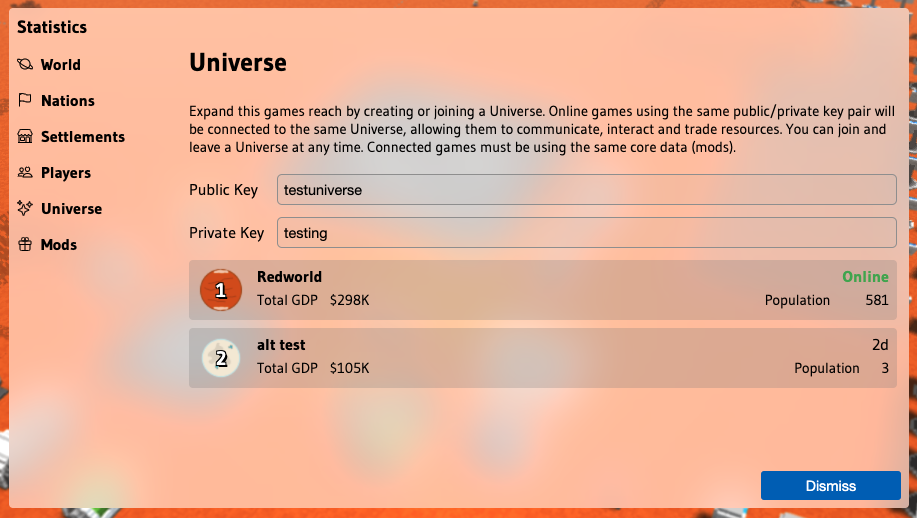 To join or create a Universe, you simply open the Statistics window on your colony, and enter a public and (optionally) a private key. Every online game using the same Public/Private key combination (and the same game version/mods) will be automatically joined into the same Universe network.

At this time, there is no default or "official" MC2 Universe, and the feature is 100% opt-in. If the community ends up creating/pushing/rallying behind a common Universe, that's great. It can also be used to set up a private Universe between you and your friends/family.

So what does a Universe get you? As of this release, it simply unlocks a global Chat similar to what is available on My Colony 1, but this is going to expand pretty quick once this update is released and I can see if the underlying connection is actually working right. Universe is going to enable interplanetary trade/governments/war, etc., so eventually having a large Universe community with a lot of players will be beneficial. So stay tuned and keep an eye on this feature, because it's going to get exciting over the next few updates!

Beyond the Universe feature, a big change is being made to game saving. Right now (prior to this update), all MC2 game data was saved to a single large library file that synced to the Ape Apps Cloud (for signed-in players). This was causing issues with both slow loading times, and data corruption when multiple instances of MC2 were open at once. This is being completely changed in this release. Starting now, game data is no longer saved to the overall player library file, and Cloud Sync is disabled by default for all colonies. It can be turned back on (if wanted) in the World section of the Statistics window.

The next big feature in v0.21.0 is the new Stat Reporting functionality. If you've used Coloniae with My Colony 1, then you know what the general idea is here. With My Colony 2 though, Stat Reporting is a bit more decentralized, and open to any developer who wishes to take advantage of it.

Stat Reporting can be accessed/enabled in the World tab of the Statistics window. 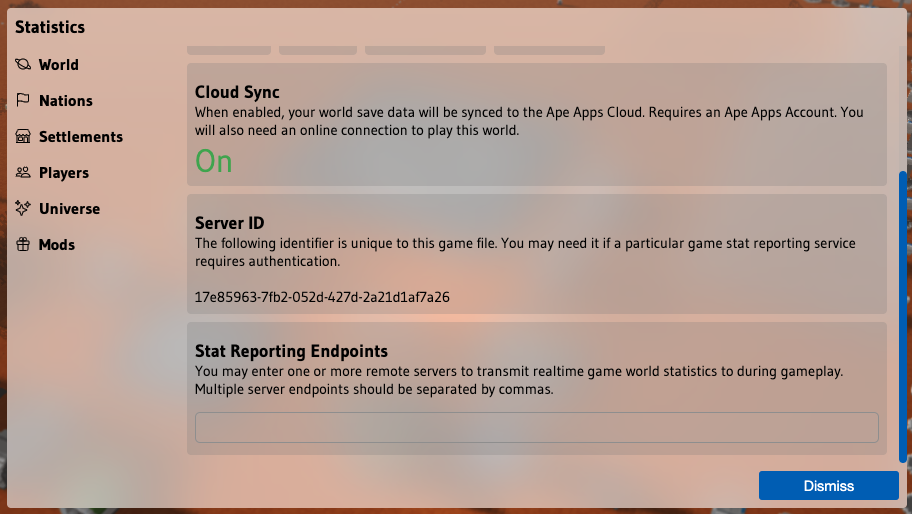 In order to use it, you simply input one or more (separated by commas) stat reporting endpoint URL's, and the game will take care of the rest. If you are a developer and would like to build your own Stat Reporting endpoint, you can see this thread which should contain all of the information you need to get started.

The final big change in v0.21.0 is engine support for separating .vpp model data out of the individual game data objects in order to (hopefully) allow for faster initial game loading times. Right now My Colony 2 is starting to take an awful long time to load on mobile devices, and if this new functionality works as I hope it should, then My Colony v0.22.0 (the next release) should see a drastic improvement in mobile load times. The new model loading scheme is currently being tested out on the Tree Farm, Galactic Stock Exchange, and the Uranium Enrichment Facility, so please keep an eye on those three structures, and let me know if you notice any issues/problems with how they are loaded and rendered. If everything is fine, then I will be moving all larger game data objects over to the new loading scheme in the next release.

So other than a few bug fixes that are not worth mentioning in the release notes, that is about it for v0.21.0. Please test out the new features and let me know what works, doesn't work, what needs improved, etc.! There's going to be a lot of exciting new features coming over the next few updates, so stay tuned for more, thanks for playing, and I hope you enjoy the update!