Boliver9067
Member
Posts: 38
4
0
1y
#1
I was in the chat with my fellow colonists and I talked about my idea they seemed to like it enough they wanted me to write you and post in the suggestions forum.

For the Regions.... many players have more than 1 of their own cities in a region as you know. I myself have like 8 maybe, and the problem with looking at your resource overviews to see your input vs output, you gotta go to each city. This is especially troubling if you have many specialized cities.

It would be amazing if you're playing on a region and have multiple cities that belong to you, that there's a menu you can look at and it combines all of you're cities productions and outputs for all the resources. That way when you look at it you know overall across all your cities you're producing this much, or losing that much. Instead of individually loading each city and keeping a mental note of your outputs and inputs. Just a thought


We have already statistics in/out, you wanna more detailed info?

Boliver9067
Member
Posts: 38
4
0
1y
#4
From your post how it's way more detailed in the city view when you go into your individual cities. Take that menu and bring it out. When I'm in the region view I'd really like to see the totals like you do in city views. That way I know if my region as a whole is producing more or consuming more of this.

Hopefully that makes sense? Not sure if I scrambled that up.

Basically want the detailed numbers in the city view bring it out to regions.
Give us a total so we know if all of our owned cities in a region are producing/consuming.
So you're in Region 1.
You have cities A, B, & C.

Regional total-
+1k aluminum
+1k gold
+500 food
Instead of having to to click into each city keeping mental note of what their consuming for food then going over to my Farm city and making sure I'm producing ample supply.

I would just look at my regional chart and see much more quickly, ah okay my regional is +500 food so obviously all my cities are good on food.

Boliver9067
Member
Posts: 38
4
0
1y
#5
Because in order for me to get an accurate number total I gotta jump in between cities. Especially since some of my cities are specialized to only one resource.

City S- is my steel city and the colonists eat up food but there's no farms in that city.

City F- is my farming city which it's sole job is to supply my region or commonwealth whatever you wanna call it with food.

Let's say I have 15 more cities. Instead of checking individually their consumption of food then going back to my farm city to see if it's producing more.

I know in a region, in any city you're in that side bar shows a little green arrow pointing up orbs red arrow pointing down but that's not 100% accurate as it fluctuates.

I don't think you and I are on the same page,

I see that too with both devices. Leave your city, go into the regional view. Now you cannot see the totals for each city right?

I'd like for a menu when you go into the regional view, it has the has the totals of all the cities and lists them there. That way you dont have to click individual cities to see your stats 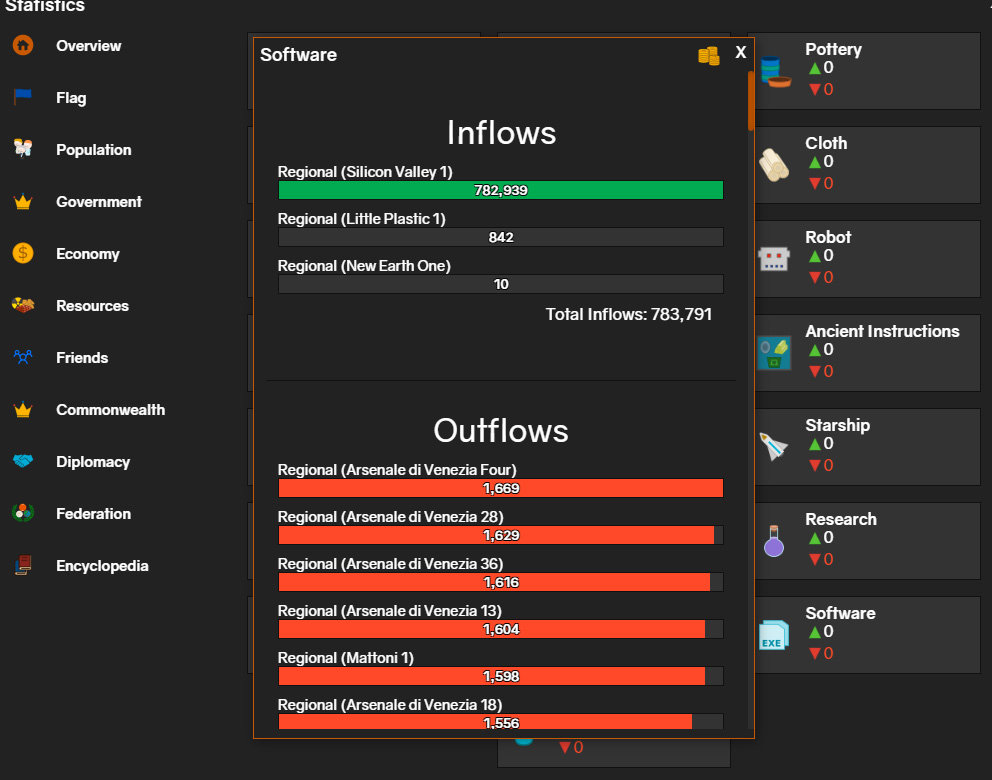 Boliver9067
Member
Posts: 38
4
0
1y
#9
Yea basically, I had a different layout and detailed in my head though, I bbn play on pc through steam and I do not have this function??