RE:(Suggestion) Game Structure
Not entirely sure since there will be different optimizations for mc2. I know it'd be harder. It just feels like in mc1 the feds were never completed, and are almost pointless except for bragging rights.

Just throwing out some small ideas out there long road before those even would take place. But yea with the decentralized server system I get that'd be more difficult unfortunately

Boliver9067
2y ago
(Suggestion) Game Structure
Hey! This is a small and later game mechanic. If we were to have something similar to federations again, I think it would be very interesting to have a ranking structure within it.

Leader of the fed and a few other roles or ranks you can assign other members. But don't make them inactive titles. Each rank can let that player do a specific action inside their fed in accordance with their rank given.

Commonwealths were a thing again really dive into that structure somewhat also. Small suggestion not really important right now for early development but thought I'd throw that in there.

Ranking system that players can be assigned and have those ranks actually have a function would make mc2 pretty cool I think.

Boliver9067
2y ago
Update for Federations
Hello! Sorry I looked through the forum to try and find a topic concerning this but I couldn't find one.

I think we need a federation expansion update.
Feds really are almost pointless right now. But they're a great idea they just need more depth.

Add some ranks in. Whoever creates it is assigned "President".
Have a Recruiter rank, or commander, VP, secretary of Fed something. Just a handful of ranks to assign various members to give them "roles or duties" to perform.

Another issue I have is you never know how many members voted on a ballot. Maybe when you click the fed category have at the bottom of the screen how many votes for yay or nay for the current ballot.

Just a few ideas, they might be trash but something to bring more life and depth to this really awesome idea! I think feds have great potential they just need to be expanded on.

Take a look at [T1P] The 1 Percent. We're the best, and we need to recruit the best!

If you're still learning the game that's okay, we just ask that you're active. We have plenty of very wise mentors in our discord/fed community who would love to help with any questions you may have.

Our Fed as an exclusive multiplayer region for stockpiles of resources. Active voting ballot panel, top leader board players, and a strong discord so we're always in contact! Join us to be the best!

Boliver9067
2y ago
[T1P] OutLander Commonwealth! Wanna be the Best? Join the Best! Recruitment bonus Most active +Discord
Hello colonists! Looking to set out and found a colony?? Look no further! I've been through this universe's worse, ranging from lava worlds, to losing everything! I've seen the ups, and downs.

That's why you need to join! After an uphill battle to settle an unknown place away from Earth, My commonwealth has seen & done it all! We have the most resources in the game, offer a recruitment bonus!

Major differences between my commonwealth and others, is I'm in direct communication with my people, we have an active friendly discord with giveaways, trades, layouts, lotteries and more! You can always contact me whenever you need help.

I've founded The 1 Percent Federation or [T1P] to recruit only the best! We take our fellow commonwealthers and mold them into the best in the whole universe! All of us are willing to help each other at a moment's notice. With virtually an unlimited pool of resources, money, and knowledge why not join us?

Charter Code= TPFYUd3h You need this at the beginning of the game when it asks "Custom Charter Code" when you start your colony.

Messaged Brandon, he informed me that the cloud data is all experimental still and hasn't 100% got it reliable. If anyone sees this just beware.

I was fortunate enough after trying to download from the cloud 100+ times for whatever reason 1 time finally worked got it transferred.

Boliver9067
2y ago
Ape app Cloud not working?
Hello, my long drawn out recovery problem is on my wall for any of you who might have insight on that, I've had great people helping me out but to no avail.

Really the problem I'm having is the ape apps cloud data. I play on my tablet, which when I do a backup it does a back up for the region not individual cities, so when I hard transferred the game file to my pc it loads the region with it's cities but I cannot go in them or make any new cities.

I sync all my stuff to the cloud, I tried on both my tablet, and my pc to login this website go to the cloud and my files and try to download all the files I have. Here is the problem,

When I click the file to download it starts downloading in the chrome browser right before it would finish it stops, then restarts. It keeps doing this with all the files, until eventually it just says file failed.

cry8wolf9 said:try selecting you username in the top right hand corner and then selecting ape cloud data. you should be able to download cloud backups from there

It downloads and keeps restarting until it fails.

The ape app cloud isnt working for me currently :/

Also on my tablet I cant find the individual save files, only the region

Boliver9067
2y ago
RE:Attempting to restore backup....
It's just stuck on restoring backup.

Does the ape app cloud data work for anyone? I've sync all my data from the game to the cloud, went to the cloud and it showed a list of all my colonies, clicked on one to start dowloading, it stared right away but right before it gets to 100% it restarts, and it does this for a while until eventually it says "Failed- File incomplete" Am I doing something wrong here?

Boliver9067
2y ago
RE:Attempting to restore backup....
Yes sir, you got it. Currently the most important city wont load, the main city. I haven't gotten many other files to load up either.

The region loads up, the cities show up, but only the main city (does show up) but it does not load.

Boliver9067
2y ago
RE:Attempting to restore backup....
Okay! So when I go to game date-backup file, it give me only 3 options. The region for my main and my other unimportant cities.

But if I go to delete file it has a big list AND I see the actual city file. Directly below that it says in yellow "My Colony Recovery File" I went to this ape apps website to my walls and to the saved files but mine in this website shows nothing. but I dont see the city file when I click backup files in the game data menu 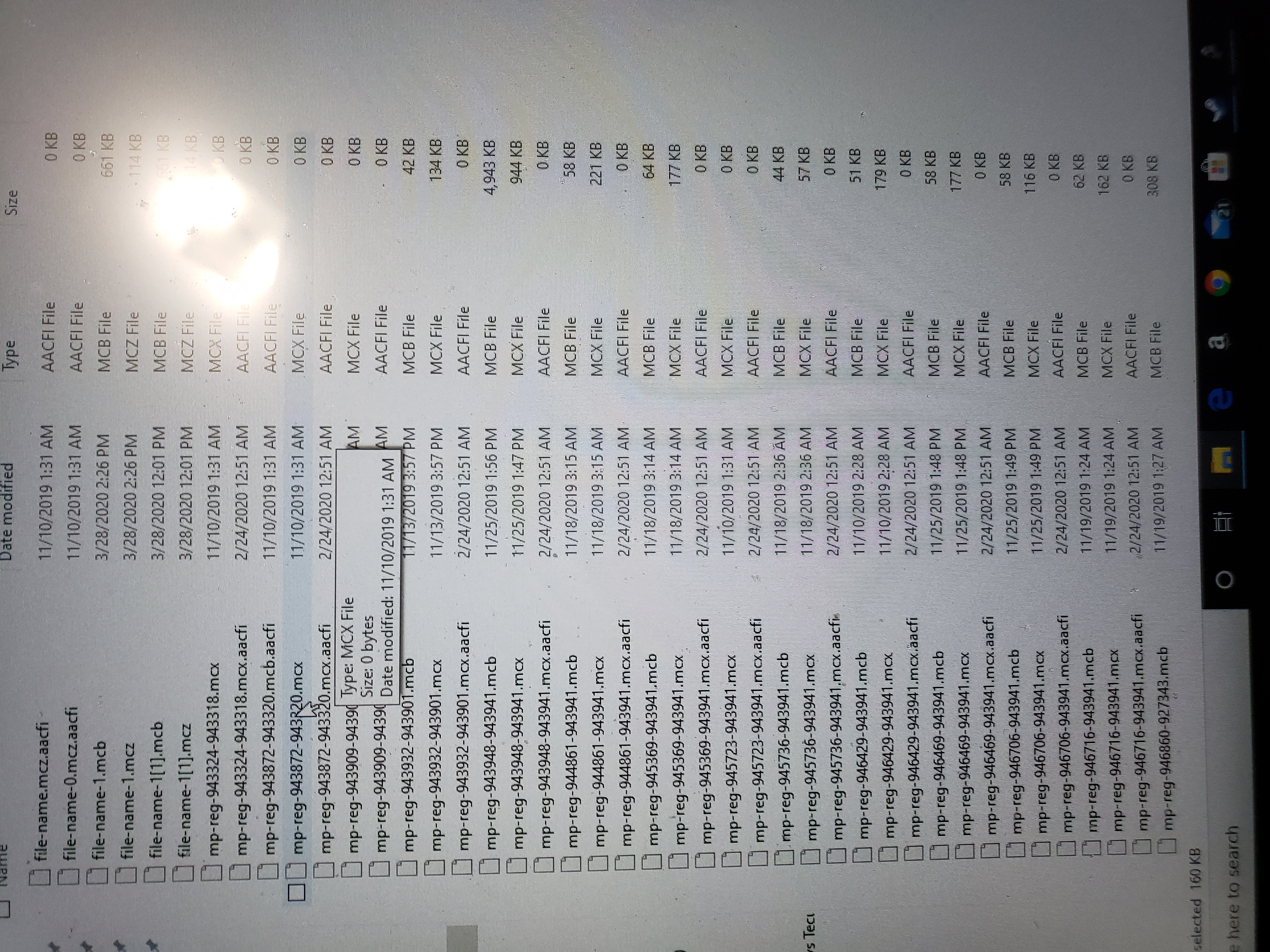 Found the motherloade of files on my pc! AND I think I found my old colony that I lost it has 4,000 kbs I'm guessing that's it. I opened up steam and my colony found out how to restore that file but same thing it says restoring forever

But I found literally all my files, individual city saves, region saves etc. I can successfully restore some. But not the ones I need or want to.

Boliver9067
2y ago
RE:Attempting to restore backup....
Right that's where they are, only 2 files though, the main city and my secondary city file.

Which the secondary loaded up fine but the main didn't. I don't have a region file for mycolony anywhere

I have:
outlander-post.mcz
File-name-1.mcz
File-name.mcz Oliver Greens
The last two files seem to be duplicates of each other

Boliver9067
2y ago
RE:Attempting to restore backup....
Update- I successfully uploaded my other city in 5 seconds loaded right away.

The "outlander" city is the main that I'm trying to restore, if I click load saves, the outlander is in my load saves but when I click to load it I get the same "attempting to restore backup" I've downloaded all the mycolony files from my tablet to the pc. I cannot find anymore still not restoring, even though that secondary colony restored literally in 5 seconds :/

Boliver9067
2y ago
RE:Attempting to restore backup....
Okay, you might be on something there lol I think I've only moved the region file which is why the game let's me access the region but not city. I'll dive into the file again see if I can find the city file

Boliver9067
2y ago
Attempting to restore backup....
Hello all

After playing mycolony on my samsung tablet, I decided I wanted to move my main colony to the pc.

So I connected the USB cables, got into my tablets files took the colony file and put it on the computer. I log into Steam start mycolony up.

Go to restore, I clicked the file I previously downloaded from the mobile and it took my to the screen that says

The file is 81KB, it's been at this state going on 3 hours now.... just wondering if that's normal or steps to take to complete this restore file to play on the pc.

I can go into the region, create another city, but when I go to switch to the main one it brings up the "Attempting to restore backup" seemingly with no end.

Boliver9067
3y ago
RE:New Region Overview Resource for multiple cities
Yea basically, I had a different layout and detailed in my head though, I bbn play on pc through steam and I do not have this function??

Boliver9067
3y ago
RE:New Region Overview Resource for multiple cities
Yes I play both pc through steam and on phone.

I don't think you and I are on the same page,

I see that too with both devices. Leave your city, go into the regional view. Now you cannot see the totals for each city right?

I'd like for a menu when you go into the regional view, it has the has the totals of all the cities and lists them there. That way you dont have to click individual cities to see your stats

Boliver9067
3y ago
RE:New Region Overview Resource for multiple cities
Because in order for me to get an accurate number total I gotta jump in between cities. Especially since some of my cities are specialized to only one resource.

City S- is my steel city and the colonists eat up food but there's no farms in that city.

City F- is my farming city which it's sole job is to supply my region or commonwealth whatever you wanna call it with food.

Let's say I have 15 more cities. Instead of checking individually their consumption of food then going back to my farm city to see if it's producing more.

I know in a region, in any city you're in that side bar shows a little green arrow pointing up orbs red arrow pointing down but that's not 100% accurate as it fluctuates.

Member
Member Since
October 16th, 2019
Welcome
Ape Apps, LLC is an independent software development company founded in 2010 by Brandon Stecklein. Over the years, Ape Apps has published over 400 apps and games across various platforms. You can get in touch with Brandon on Twitter or by leaving a post on his wall @bastecklein
Ape Apps
•Ape Market
•Ape Web Apps
•Soundboard City
•BackgroundBag
•Mad About Memes
•Ape Apps Store
•Ape Designs
•Official Discord Server
App of the Day