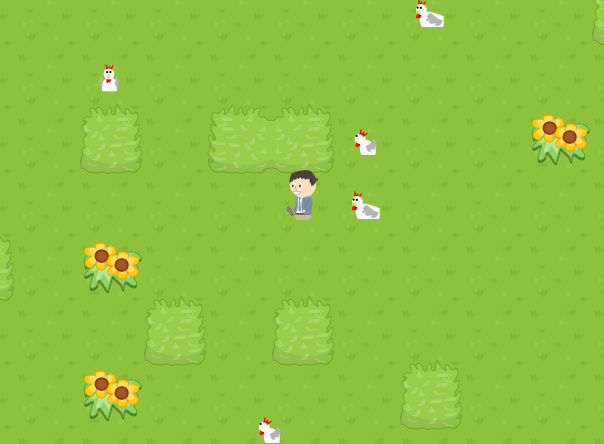 This is more or less a test of the mob spawning algorithm. The chickens are theoretically able to drop a new "raw chicken" item when killed, but since I haven't gotten combat implemented yet, you are currently unable to retrieve the item.

This release also includes improvements to multiplayer. In-game chat has been added, and if you have Epic Adventure installed as an app (either from Google Play/Windows Store or the PWA installed to homescreen), you can now quickly join with the new Friends List integration.

Finally, there have been various bug fixes and you can now also move diagonally.

There is a lot more to come to Epic Adventure in the months ahead. The game is starting to build up some players, particularly on Kindle Fire devices, so the updates will probably start coming more frequently now, so keep the suggestions coming. Next on the to-do list is getting combat up and running, either Player vs Player or Player vs Mob (so you can kill and eat these chickens). You will also be able to build a campfire to cook your chicken meat, or mix other recipes together. Cooking will also be possible on the furnace. I am going to get Seeds working, since you are currently able to plow the land, but not plant the seeds you collect. Also, procedurally generated surface buildings and underground dungeons are coming to the game, with the dungeons including new mob types that you can fight for loot (and glory).

So stay tuned for more, because Epic Adventure will soon be morphing into a full-fledged multiplayer procedurally generated role playing game!

Try Boom Feed, the free RSS reader from Ape Apps! Boom Feed is a free RSS, Podcast, news reader and aggregation app, available on most platforms including Desktop, Android, and iOS. Try it today!
Epic Adventure
•Download Links
Welcome
Ape Apps, LLC is an independent software development company founded in 2010 by Brandon Stecklein. Over the years, Ape Apps has published over 400 apps and games across various platforms. You can get in touch with Brandon on Twitter or by leaving a post on his wall @bastecklein
Ape Apps
•Ape Market
•Ape Web Apps
•Soundboard City
•BackgroundBag
•Mad About Memes
•Ape Apps Store
•Ape Designs
•Official Discord Server
App of the Day