bastecklein
Developer
Posts: 2855
744
0
1y
#1
Today I am finalizing v1.7.0 of Voxel Paint which is a fairly considerable update with several new tools and features being added into the program. Let's take a look at what's new!

First off, Voxel Paint now has, not one, but four pen tools available, accessable by either right-clicking on the pen tool icon, or selecting the pen tool again when you are already using one of the pens (for mobile access). Doing so will give you this new context menu where you can select which pen tool you are interested in using: 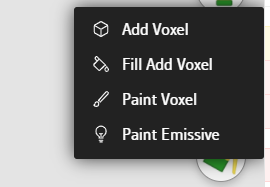 The Add Voxel tool is the same that it's always pen, the regular pen.

The new Fill Add Voxel tool accepts two clicks and will then fill in every cube in-between the first and second click. For instance, if you click on the top left corner of the painting and then the bottom left, you will get this: 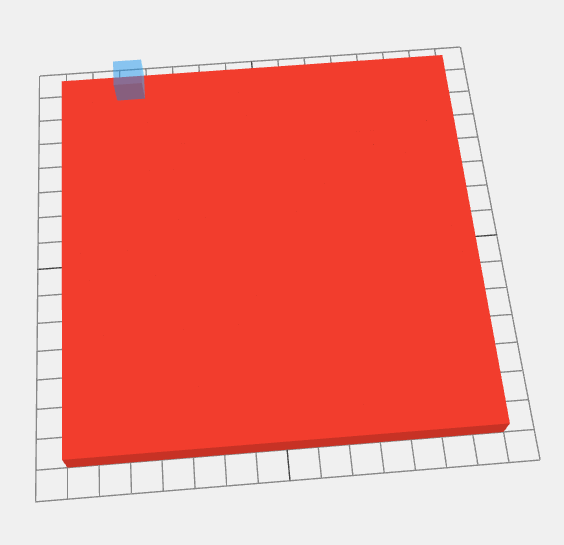 Certainly a lot faster than single clicking on each individual tile!

The Paint Voxel tool is used for painting over, or changing the color of already existing voxels, handy for adding texture to a model or simply making changings without having to erase and redraw parts of your model.

Finally, the new Paint Emissive tool is used for quickly setting a group of voxels as emissive. You use it by "drawing" over them as with the Paint Voxel tool. It also allows mobile users to set voxels as emissive, as they couldn't before.

In order to keep all of the new tools straight, there is a new readout area on the bottom-right of the screen next to the coordinate readout that lets you know which tool you are currently using.

Aside from the new pens, there are a couple of more tools you will find in this release. Under the Image menu, there is a new Hollow Image wizard. This tool will go through your model and automatically remove all cubes that are not visible from the outside. This is a handy feature if you've just created a bunch of new voxels using the Fill Add Voxel tool and want to remove the excess in the center. Hollowing an image can greatly reduce your .vpp file size, as well as rendering performance.

When you first load up Voxel Paint, the default file size has been changed from 20x20 to 16x16. I made this change because the two games that currently use .vpp models, My Empire and My Colony 2, both use 16x16 models by default, as does the Voxel Playground utility. It only makes sense for Voxel Paint to conform to that default. I have also adjusted the maximum zoom out range, so you can zoom out on your models more than you could previously.

Finally, Voxel Paint now has a new file export mode called Precompile Model, which performs a majority of the operations that the My Empire or My Colony 2 game engines normally do before adding the model into the game, and saves that data into the actual .vpp file. The precompile export can take a minute or so depending on your device and will increase the file size by a factor of 2 or 3 (or more). The benefit is that it will reduce the time that one of the above mentioned games (or the Voxel Playground once it's updated) takes to load your model by 99%, which is good. If you are just working on small models or making personal artwork and do not care about rendering in My Colony 2, then you probably do not need to do a precompile export. On the other hand, if you are interested in My Colony 2 modding or creating Voxel Playground scenes, the precompile export is probably the way to go.

Anyway, the v1.7.0 update is live now on the Web and on the Ape Apps Launcher and should be hitting all other platforms over the course of the week. I hope you enjoy the changes, please leave feedback so that I can continue to improve the app, and stay tuned for more Voxel Paint updates!