Over the coming days, I will be rolling out a new feature to Ape Apps Accounts called Ape Coins, but since parts of the feature are already showing up in various Ape Apps locations, I thought I would take a minute to explain the concept and what can be expected, so that everyone knows what is going on. 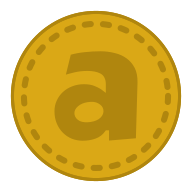 What Are They Used For

Ape Coins can be used for in-app purchases. When you have Ape Coins on your account, there will be a new Ape Coin payment option when you are going to unlock Premium on one of my games/apps.

They can also be used in different ways by different games. I have considered the possibility, for instance, of adding an in-game Mod store to My Colony 2, where mod creators could charge a small Ape Coin fee for their work (or post for free also). They could also be used to facilitate in-game economy in some types of games.

Ape Coins can facilitate micro transactions. Since a single in-app purchase typically cannot be less than $1 in value, using Ape Coins, content could be priced far lower than $1, as little as 1 cent per transation.

How To Obtain Ape Coins

Currently, Ape Coins can be purchased from the Ape Apps Account portal at https://accounts.ape-apps.com. Once rolled out, you will also be able to purchase them in-app using the various App Store payment methods.

I am also allowing for full transfer of Ape Coins between Ape Apps Accounts. In the past, people have requested the ability to purchase Premium on behalf of an account that was not their own, whether for a friend or a child. Now, you will be able to purchase Ape Coins on your account and then send them directly to another account.

On this website, your Profile (Wall) page will soon include a button that will allow someone to give you Ape Coins. This button will also be on your profile page within the Ape Apps Launcher. Also when a user is live-streaming their game play, as you can in My Colony for instance, there will be a "Donate Ape Coins" button for people watching the stream.

As mentioned before, some games may eventually allow players to sell content to other players for Ape Coins, which will be another way in which they can be earned.

The system also allows for me to have contests or giveaways, whereby I could easily award winners free Ape Coins directly to their account.

There will be some limitations to the system. Firstly, the purchasing of a Premium license using Ape Coins will only be available on Ape Web Apps or the Ape Apps Launcher. Unfortunately, this is due to the various rules and limitations of the major app stores (see Epic VS Apple for instance). Once you purchase premium though, it will be tied to your account, and will then work on mobile apps. You just can't do the actual purchase from within the app.

That limitation does not count for microtransactions though. If you already have Ape Coins on your account, you would be able to use them in-app on Android or iPhone, just not to purchase Premium. And Android and iPhone users would only be allowed to purchase Ape Coins in-app using the respective app store payment methods.

I also someday would like to have the ability for users to cash out their Ape Coins, especially if they were selling digital goods like mods or maps. This will not be available for a little while though. The reason being, is cashing out coins will require government tax reporting, and I will have to collect tax and banking information for any user wishing to cash out. So while the feature might come at some point, for now the coins are just to be used within the Ape Apps ecosystem.

You may have seen some Ape Coins references sprinkled around my ecosystem here and there over the last couple of days, and now you know what the deal is. The new system is coming for those who wish to use it, although there is no requirement to use the Ape Coin system at all, and Premium can still be purchased the same way that it always has. This is just one more payment method that may make things easier for some users, and also unlocks potential for other things in the future.

Anyway, let me know if you have any questions or comments!

itsLiseczeq
Member
Posts: 73
39
0
6mo
#2
Enable interest so I can be the first a¢ quadrillionaire
Have a fantastic day!
~cakedon (formerly itsLiseczeq)