Even after the 0.94 update my U.E. colony still doesn't want to open.

I have a previous post on this "bugs" forum (titled "Late game human colony won't open") that goes more into detail about my problem, so i'm not going to talk about it here.

Since i've made that post, i've tried to delete that colony and then restore it using a previous save, but that still didn't work.
I don't know what to do to anymore.

It still won't open, even after i've updated to 0.92 on all devices.

GutiTudor
3y ago
Late game human colony won't open (FIXED)
!!! This problem has been fixed after the 0.95 update !!!

After the 0.91 update, my oldest and most advanced colony (made with united earth) has been denying me access, and showing me this message when i try to enter:

I have tried restoring a previous version of the colony, but this hasn't worked.

This hasn't happened with my other, less sophisticated united earth colonies or with any of the insectoid or reptillian colonies that i have.

This bug is present on all of my devices (android phone, ipad and windows laptop).

GutiTudor
3y ago
Game crash on apple
On my iPad Pro tablet, if I access one of my colonies, after a few seconds of playing, it will close the colony without any notice and bring me back to the main screen.
And, with my human colony with which I have reached starship building (the biggest colony that I have), if the game tries to save it will crash, and if I try to save the game, it won’t save no matter how much I wait.

GutiTudor
3y ago
How do I make .mcb files?
Just like the title says, I am having problems making .mcb files (or backup files, as they are also known) in Helios file manager, which resulted in the loss of one of my colonies (you can read more about this in my technical support post titled “custom map offline colony save file corrupted”).
I remember having .mcb files in the my colony file, but they must have disappeared at some point because I have none.
There are also no .mcb files on my laptop which has the windows game version.
If there is any computer wizard reading this I need ur help pls.

GutiTudor
4y ago
Custom map offline colony save file corrupted
I had created an offline reptilian colony with my custom map “volcano beach” (which you can see and download in the custom maps section of the my colony forum) a few months ago. I hadn’t checked on it for 3 or 4 updates and when I tried to access it in the 0.71 version of the game it told me that the file had been corrupted and didn’t let me enter. I then tried to restore the backup file but I found out that there was no backup file for this colony (and I never deleted it or any other file from this colony).

Update: after managing to enter it on the windows 0.70 version of the game (which I have now updated to the 0.71 version) I was able to access the colony on the phone, because I have cloud sync on on all of my colonies, both offline and online except for my red planet regions colony which has now been corrupted on my phone (I only have it on the phone) and since, for some reason, there are no backup files for any of the colonies in the my colony file, I will now have to delete this colony.

I hope this only happens to offline colonies and only on the phone, because I don’t want any of my big online colonies to get corrupted on both devices and not be able to get them back.

GutiTudor
4y ago
Region resource production not at full potential when not in the specific city
What I mean by that is when I’m not in city x and I am in city y, the resources that are produced by city x will be produced at a much slower rate (than when I’m in city x) while I am in city y. For example: city x normally produces steel at a rate of 1000 per minute, but when I am in city y steel is being produced at a rate of 10 per minute (considering that city y has no steel producing facilities).
I can see this being a major problem when the player has separate cities focused on producing a certain resource. He could have a city focused on making food, and, while he is in another city, his food production rate will drastically slow down and he will start having problems keeping the colonists alive.

Also, when I am in the screen where I can see all of my cities, resource production stops completely. I don’t know if resource consumption continues, but I hope not.

GutiTudor
4y ago
Replace roads option
I know that a similar option exists when you click the road you can upgrade it to hardened road and then to the black version, but other than that it doesn’t let you to upgrade it to the rainbow road or the yellow brick road (if you have the premium version of the game).
I think it would be a nice idea to let the player replace all of the roads with any type of road he wants (without having to destroy all of the roads and then place the new ones manually).

GutiTudor
4y ago
Ancient alien plastic factory
After the ancient alien gold synthesis lab was added I realised that most advanced versions of resource producing buildings now had an ancient alien version, making it easier for advanced players to get the tons of resources that they needed. But, after a certain point, your demand for plastic rises a lot because you need it for the triantanium refinery and since it isn't available on the stargate you will need to make a lot of advanced plastic factories that will fill up most of your space.
So, perhaps in the next update an ancient alien plastic factory could be added to help more advanced players get more plastic faster.
This version of the plastic factory could still use robots besides all the other materials needed (such as oil, uranium or alien artifacts).
It could also be as if not more expensive than the alien enritchment facility to not make it so overpowered.

Or simply make the plastic resource available on the stargate.

GutiTudor
4y ago
RE:Volcano beach
Thank you
I think the lava only erupts if it's on a lava planet map.

GutiTudor
4y ago
Volcano beach
A hawaii style map with a mountain and active volcano near the sea, both having enormous amounts of resources. 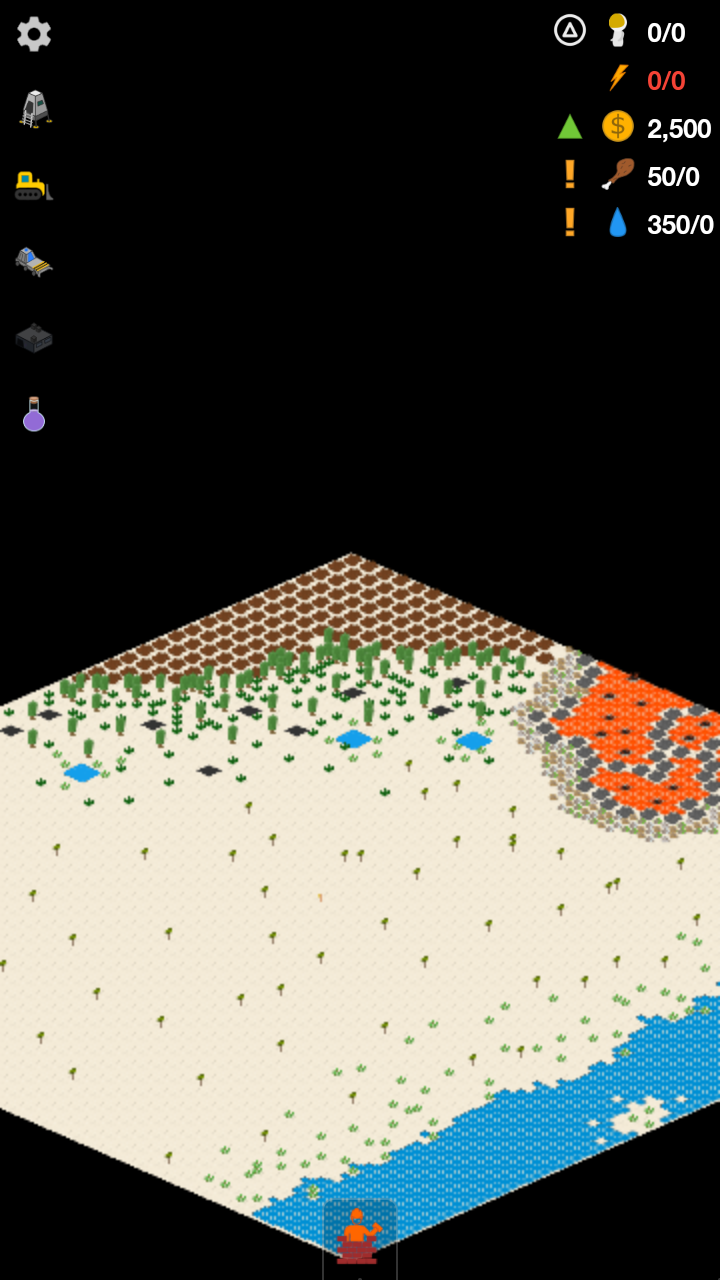 You can play this map with any civilization.

GutiTudor
4y ago
RE:[MOD] Zolarg Prime - Page 2
I just downloaded it and I realy like your idea of making the brew pits into honeypot ants that mix the food and water inside of them to make rum.

GutiTudor
4y ago
RE:Making money with diamonds and alien artifacts
Yep, sorry, I messed up the name

GutiTudor
4y ago
Making money with diamonds and alien artifacts
After the 0.60 update you are now able to get diamonds on every human map and therefore you can now build jewelry stores on every human map. In my opinion jewelry stores are the best money making building because they give you a maximum of 576$ per minute while occuping only one space. They are also very cheap to build and only need 3 workers. (While the investment bank occupies 4 spaces, is very expensive, gives you only 2200 per minute and needs 500 workers)

As for the alien artifacts, after you have built 3 or 4 relic research centers you will start getting a lot of alien artifacts. They sell for about 200 million $ per 100 000 at the star gate. This is a quick way of getting a lot of money if you need to get something very expensive. (Aka buying all the resources needed for the hall of congres.)

GutiTudor
4y ago
RE:Pro tip for lava planet
The eruptions will still happen, that is true, but the point is that the lava tiles won't spread, and therefore lava pools that will remain for days won't appear.
And also if you have synthetic crysaline, the diablo crysaline not spreading shouldn't be a problem.

GutiTudor
4y ago
Pro tip for lava planet
If you have a lot of spare time and a lava planet map you should try to cover all of it with paste paths, so when an eruption happens it won't start spreading . 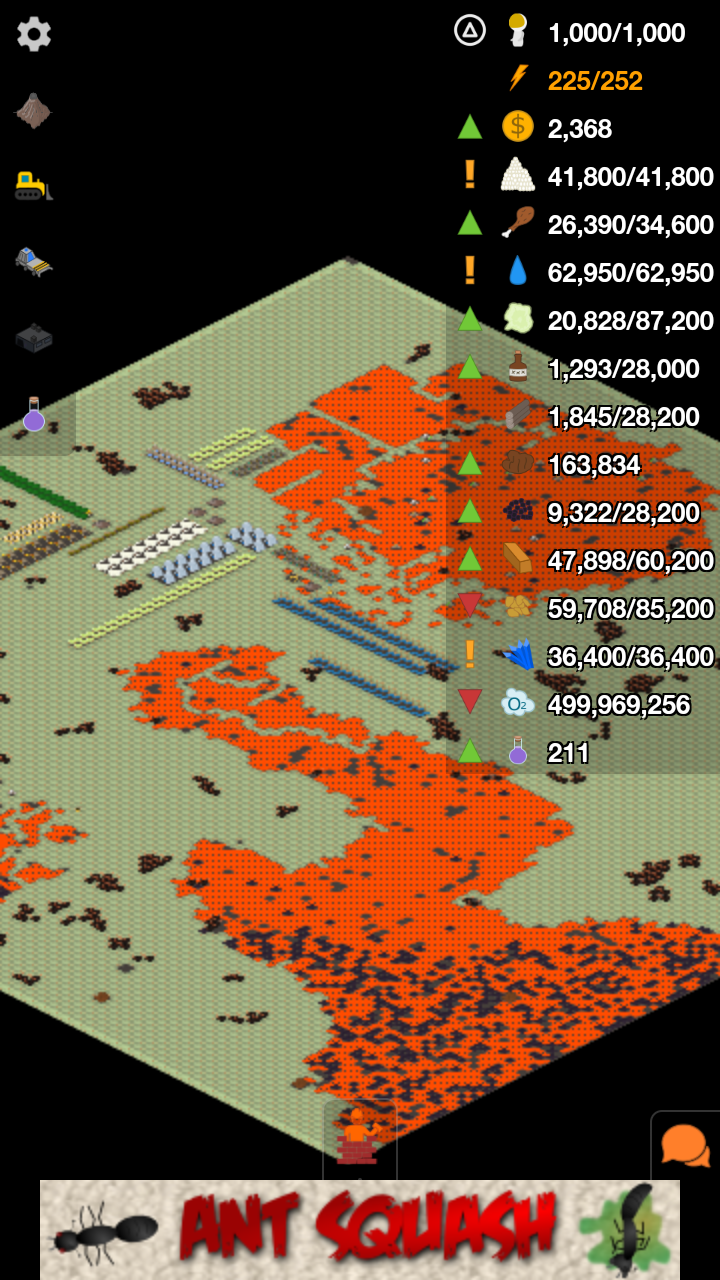 I covered mine in about 3 hours ,but if you don't want to deal with giant pools of lava that will never disappear this is the way to go.

PS: The pools that you see in the screenshot above were already there when I started covering it.

Member
Member Since
January 19th, 2018
Welcome
Ape Apps, LLC is an independent software development company founded in 2010 by Brandon Stecklein. Over the years, Ape Apps has published over 400 apps and games across various platforms. You can get in touch with Brandon on Twitter or by leaving a post on his wall @bastecklein
Ape Apps
•Ape Market
•Ape Web Apps
•Soundboard City
•BackgroundBag
•Mad About Memes
•Ape Apps Store
•Ape Designs
•Official Discord Server
App of the Day