bastecklein
Developer
Posts: 2890
768
0
4y
#1
I have just posted the v1.1.14 for the Ape Apps Launcher. This update fixes several bugs related to the x86 Windows edition of the client. It also adds a new IAP screen for doing premium upgrades when you are signed in to an Ape Apps Account, applying the upgrades directly to your account rather than going through the old .amk system. 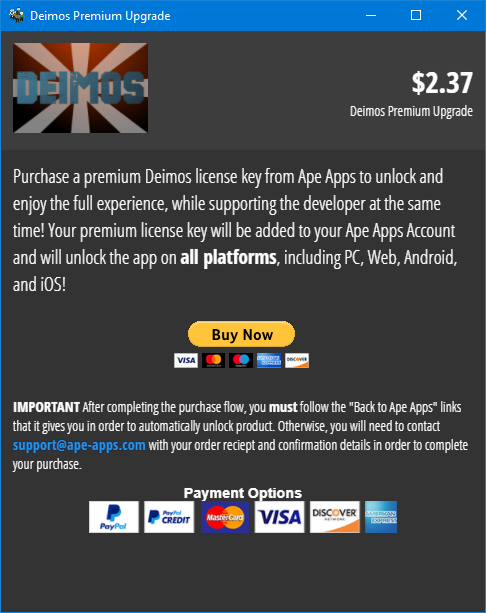 There are also big updates to the image-import feature used in apps like PDF Document Scanner and Photag for users on Windows 10 x64. The app now allows scanning images using a flatbed or auto-feeder scanner either locally or over the network. The only outstanding issue with this is that when using the auto-document feeder, it will only return the first image scanned. I am working on multiple scans at once, which should be coming in a future release.

That's all for today. Thanks!
Owner of Ape Apps, LLC

misteddawn
Member
Posts: 378
0
0
4y
#2
Being able to get the premium version from within the launcher and adding it to your account will definetly make things easier, especially for you. :)

GrindThisGame
Member
Posts: 44
1
0
3y
#3
When I first loaded it the entire window was blank. Closing the launcher and reloading it made it show the applications that could be installed. I also got a windows defender warning when installing.
My YouTube tutorial series: https://www.youtube.com/watch?v=Tfw_-RB6D-Q&list=PLHw_EJXYsdHgSUAzwqvtfgpoBDm16flcP