Ansom
Member
Posts: 415
55
0
2y
#2
I have noticed the value tend to change if inside a map are present determinate building, like starport.

For fix the value some time i just need to restart the game.

colbya
Member
Posts: 1060
20
0
2y
#3
value is determined on trades not saying this is not a bug but values changing in trades and even your own colony effects the value you see on the resource bar 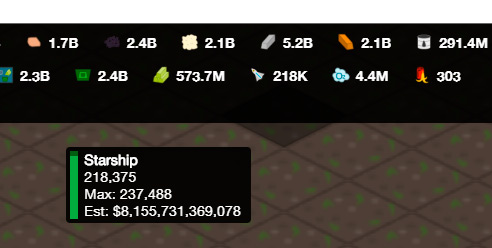 After a city creation 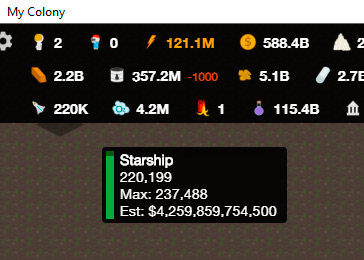 After a "Return to Title", and load the region without close the game

With a complete game restat 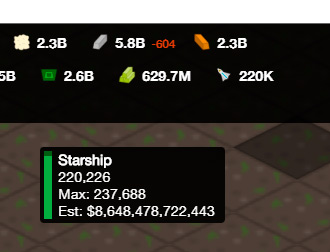 Other resources have same variation, not sure if for all. 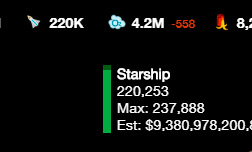 Is not a big and ugly bug, until you try to export the resource of course, i'm pretty sure can cause some low GDP level in some city/colony, but nothing serious.

Wubman
Member
Posts: 164
0
0
1y
#6
Just tested this bug, and it still exists in 0.99. @bastecklein I'll walk you through the process to replicate this issue.

I load my region up, I have 120k starships in storage and the estimated value when I hover the mouse over it is 4.402T worth.

I enter a built up city, and the number immediately drops to 3.111T estimated worth.

Enter a non built up city and the value remains at 4.402T. At this value, the export price per million is 2.258T money. If I try to export after the worth of the resource has been reduced to the 3.111T from entering the built up city, then the export value drops to 1.596T per million.

If you return to title and reload the game, it resets back to 4.402T estimated value hovering over 120k starships.

If you don't enter any cities, just load in, return to title and repeat a bunch of times. The value goes up. After a number of resets, the estimated value for 120k ships peaks at around 5.703T.

From there, if you enter a non built up city, the value remains the same. And the export value per million had been raised to 2.920T.

This works for all resources, not just Starships. This is a significant problem because it makes it very inconsistent to export and import (the problem works exactly the same for import prices). With the values changing like this, you either have to spend a long time trying to reset and playing under certain conditions to get your money's worth for resources or you just accept the lower amounts from the glitch.

This should be very easy to replicate the issue, so this might make it a bit easier to track down the problem. Hope this helps bast.
Hello! I am a High Wizard from the Nations of OZ, come check out our discord server! https://discord.gg/qqCswpF