bastecklein
Developer
Posts: 2953
870
0
2y
#1
So I have finally determined to finish the game Colony Wars and get it v1.0.0 released to all platforms in the near future. It's pretty much my #1 project at the current time and is going to be my top priority until it is finished.

I am currently developing Colony Wars as v0.5.0 Beta, which you can access from the web browser here, to check on current progress:
https://www.apewebapps.com/colony-wars/beta/

This version will be in development for some time, and will be changing on a daily basis, so check back often to see what is new and to help test. When this version is done, it will be released to the Ape Apps Launcher and to Android for final public testing and error logging. After a couple of weeks of that, a final v1.0.0 build will be polished and it will go live to all platforms, including Android, Kindle Fire, Windows, Mac, Linux, Steam, and iOS.

While this final development push is under way, I will be posting to this thread all of the more significant changes and additions I have made to the game compared to the currently live v0.4.0 release, so you can check up on the progress of the game.

Stay keep a lookout here and stay tuned for more, because Colony Wars is about to go through a lot of changes!
Owner of Ape Apps, LLC

For desktop players, new key bindings have been added to the game to make play easier. Here is a documentation of what is available so far:

1-0 (top number keys): select fire team. if holding crtl key, assign fire team. So if you have some units selected, press ctrl+1 to assign them to fire team #1. Then later press 1 to select those units.

crtl: hold on the control key and click/drag over units to instantly enter multi-selection mode without having to press/hold first

I will keep this post updated as more controls are added.
Owner of Ape Apps, LLC

bastecklein
Developer
Posts: 2953
870
0
2y
#3
The Multiplayer code has been completely rewritten in this update.

The two primary methods of multiplayer communication are WebRTC and TCP/IP. The following table shows you what is supported on what platform:


Multiplayer games are done peer to peer, so there is no centralized server. In order for you to be able to join a game, the Host player must support one of your available communication protocols. The game takes care of matching protocols and connections for you, and generally a Host which you cannot join should not show up in the listing.

WebRTC is the easier protocol to deal with, and is the preferred method whenever available between two clients. The reason for this is that in order for a host to accept TCP/IP connections, the user will have to forward TCP and UDP port 2733 to their device on their router or modem, and make sure port 2733 is clear on their firewall. For advanced users this is probably trivial, but a lot of players will not know what they are doing here. With WebRTC, none of the port forwarding steps are necessary.

This only becomes an issue because the Windows 10 store client, which will account for a good portion of the users, does not support the WebRTC protocol at this time, and will not until probably 2021 judging by documentation released by Microsoft.

Keep in mind though, that LAN games can generally use the TCP/IP protocol without the need for port forwarding.

Players only need to have protocol compatibility with the host of the game, not with each player. For example, if a player starts a game using the Steam client, and has properly forwarded port 2733 to their machine, they will be able to accept connections from both Windows 10 (Store) players over TCP/IP, and from Web Browser players over WebRTC. Even though a Windows 10 and Web Browser client do not support the same protocols and cannot connect to each other directly, the Host on Steam will be able to act as a link between the two so that everyone can play the game.

Getting this multiplayer code right is important, since I decoupled it from the main Colony Wars script, as I intend to use the same code in other games. So while the game is in testing, please try to get your friends onto the beta to test out Multiplayer and let me know if it works!!
Owner of Ape Apps, LLC

bastecklein
Developer
Posts: 2953
870
0
2y
#4
Low Power and Silos Needed! Finally, the Solar Towers and Silos actually do something, and you need both of them for a fully functional base. To help you keep on top of things, there are new Power and Storage meters on the side bar that let you track when you are running low on either.

bastecklein
Developer
Posts: 2953
870
0
2y
#5
Rally Point support has been added to the engine now. When you click on a unit producing building like the Barracks or Vehicle Factory, you can hold down on the Ctrl key and click somewhere to specify a Rally Point. All new units that come out of that building will go straight to the rally point. 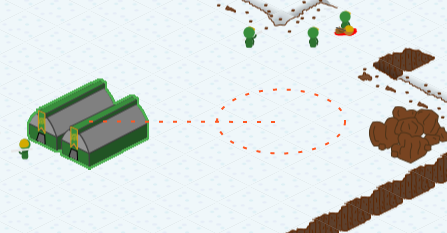 spamdude
Member
Posts: 109
41
0
2y
#6
Mr. Stecklein, the "connect to IP" button doesn't work for me when I try to play multiplayer. Might there be any particular reason why?

bastecklein
Developer
Posts: 2953
870
0
2y
#8
@spamdude That button should be removed soon, as the browser does not have the capability to connect directly to TCP/IP sockets, so it instead uses the Web RTC protocol. Beta v0.5.0 is about to go live presently.
Owner of Ape Apps, LLC