The Future of the Ape Apps Launcher

bastecklein
Developer
Posts: 2855
744
0
10mo
#1
A couple of weeks ago, I announced that I was considering discontinuing the Ape Apps Launcher and most of my native desktop applications in favor of directing users towards the Progressive Web App (PWA) edition of my apps and games.

The Ape Apps Launcher was first released in early 2018 using Electron, and was initially created because there were a lot of capabilities required by my apps that I was just not able to deliver through the web browser. In the last 3 1/2 years though, a lot has changed. Both Microsoft and Google have gone all-in on PWA's, and between the two of them, they make PWA's installable, offline capable, with almost the entire native all feature set on nearly every platform. Because of this, it no longer makes sense to put in all of the hours and effort required to maintain the Ape Apps Launcher and the native Desktop host platform, when their entire purpose is now integrated natively into every major platform.

That said, the Launcher does offer a few things not found on my website, and also provides a nice place to access everything Ape Apps from one single desktop application. I do recognize how handy it can be for some people, so going forward I plan to "sort of" keep the launcher going, but with a bit of a twist.

The Ape Apps Launcher itself is going to become a Progressive Web App, which you will be able to install on any device, even mobile. I will still maintain the native download edition of the application, but it will basically be a wrapper for the PWA. This will allow me to continue providing the capabilities of the launcher, but without having to maintain the separate Web App Core codebase for Electron. It also means I will be able to make updates to the Launcher itself without having to upload new binaries whenever I want to publish a change.

Similar to the new PWA launcher, I will also be releasing another PWA called Ape Web Apps TV Mode, which is sort of like the launcher except built with a 10 foot interface and can be controlled entirely using a gamepad. This is designed for computers connected to a TV (like home theater PC's) and gives a console-like interface and access to all of your Ape Apps games and applications. You will even be able to use the Ape Web Apps TV Mode launcher on gaming devices like the Xbox One/Series S/X, which will be getting the new Chromium based Edge soon, along with full PWA capabilities, or on Android TV devices. Below is an early-build screenshot of the TV Mode launcher. 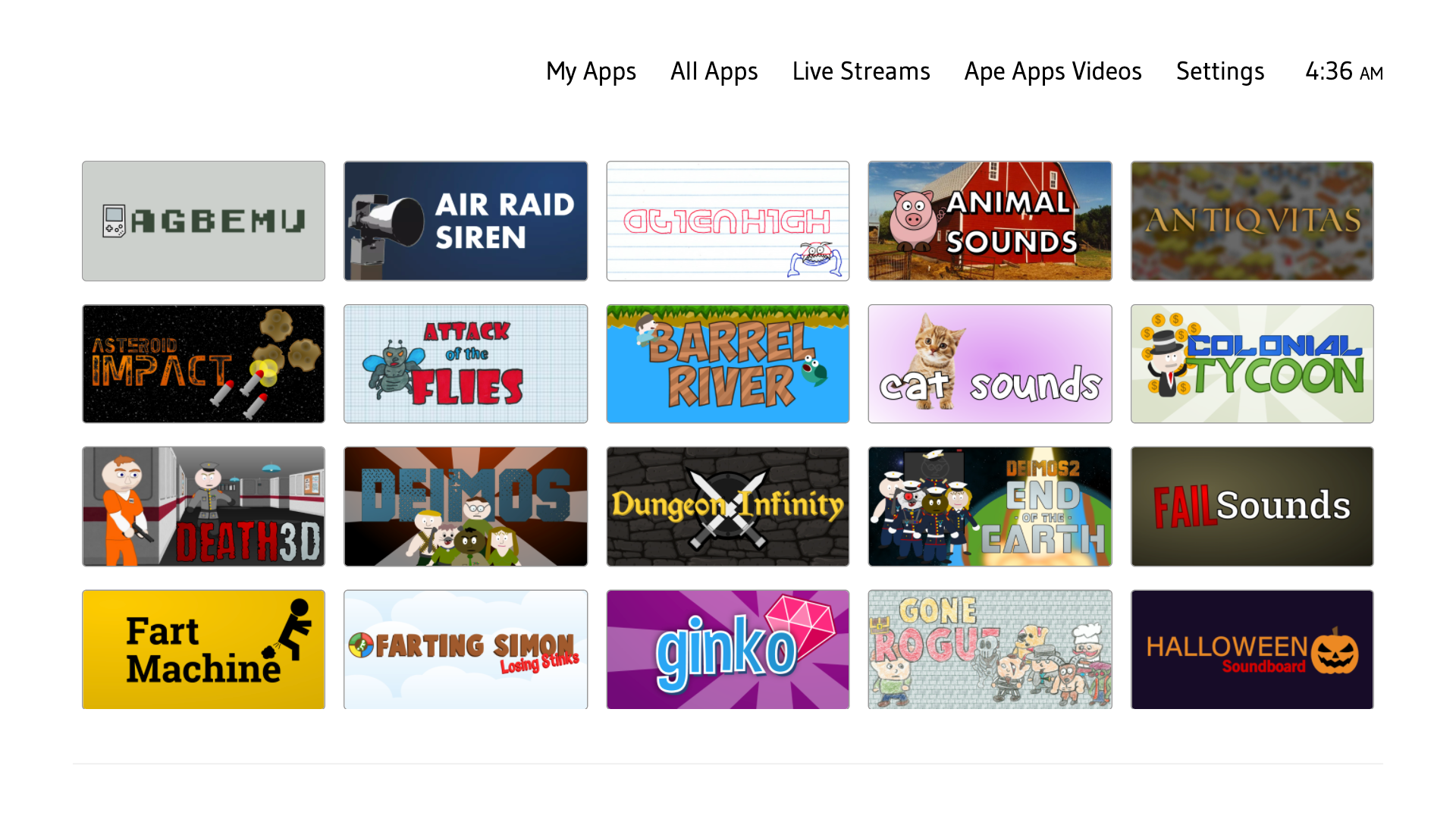 You can think of the TV mode launcher as basically an Ape Apps gaming console that runs as an app within existing devices/consoles, and should give you access to the entire Ape Apps library on any television (you can also just use it on a PC or Phone if you have a bluetooth gamepad connected and prefer the interface).

So that it was is in store for the Launcher. There will not be any more work going in to the current Electron build of the application, as I move all important code directly to my server. If you are currently using the Ape Apps Launcher, it will automatically be upgraded to the new PWA-hosted edition once it is ready, so there is nothing you need to do. And I will make a separate post/announcement when the TV launcher is complete and ready for use.

The Future of the Ape Apps Launcher - Latest Replies