Today I am publishing the v0.13.0 update to My Colony 2, which should be hitting all devices over the coming days! This is another big content release as MC2 starts making its way into the hands of more players, who are going to need a lot more content to play around with. So without further delay, let's start taking a look at what is new with this update!

Three new resources have been included with this update, which are Software, Aluminum, and Uranium. To go along with the two latter resources, Aluminum and Uranium deposits have also been added to all worlds (the Uranium is also glow in the dark, for extra fun). 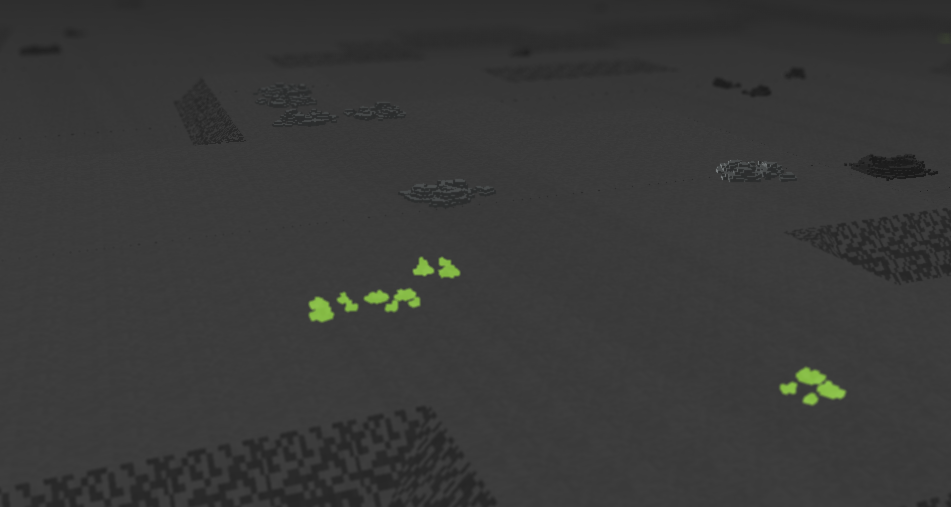 I have also increased the abundance and availability of Gold, which was a little too rare in previous releases. And to go along with the new resources (and also add a little more flare to the various worlds), 5 new biomes and 4 new terrain objects have been added to the game as well.

With new resources, we're going to need new units, right? The hardy Aluminum Miner is back in the game, and can be built at the Construction Yard. Aluminum can be deposited at the Raw Materials Depot. I do not plan on adding the MC1 Aluminum Refinery to the game, as it was basically a useless structure.

Of course, the corner stone of any update are the new structures, and there are a handful in this release. To start, there are several new types of pavement in the game, the Hardened Pavement and Checkered Pavements have been added to the game, as well as Artificial Grass from Cosmic Turf, Inc., for when your fancy Golden Shelter residents just need to have a yard to see out their window. 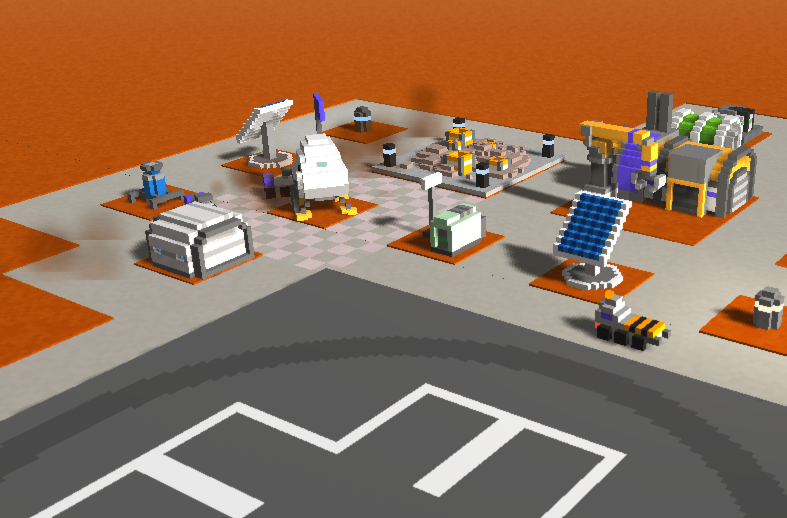 Pictured above next to the Checkered Pavement is the new Internet Relay Booth, which is a beginning game entertainment and education combo structure. And on the subject of early game structures, we also say hello to the Small Security Station, providing the first way to build up your settlement security rating.

In the last update, Rum was added to the game. We now have the Rum Cellar for storing it.

Pictured in the bottom-left below, and to go with the new Software resource, the Small Server Building and the Small Software Studio are now available to build, and the Bandwidth utility has also been added to the game. 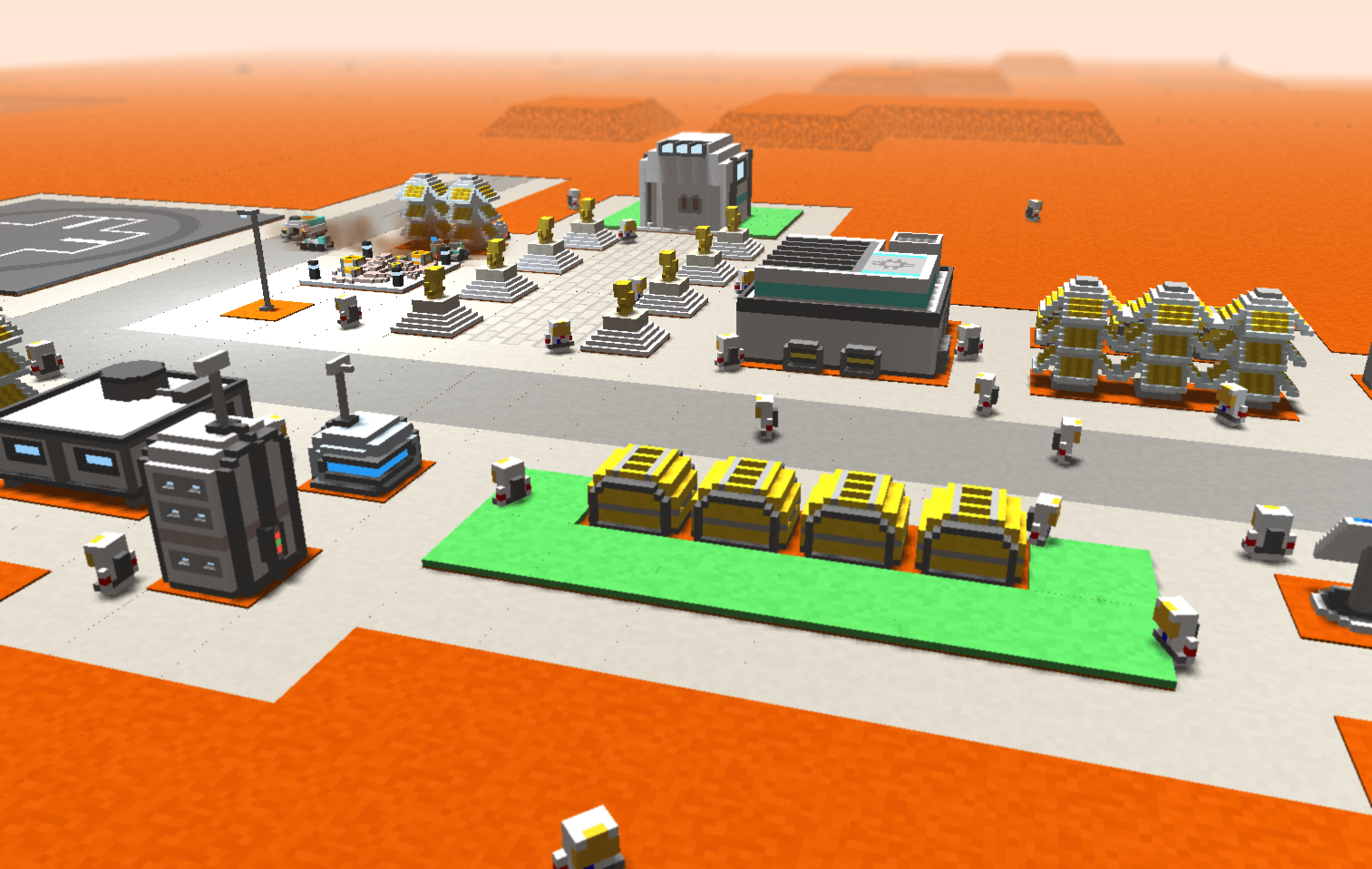 You can also see the Small Statue pictured above. In addition to the statue, the Commemorative Plaque is back, which will let you label areas of the map for all to see.

Finally, the Bank is back, faithfully generating Money and Civics for your settlement, and is the first structure to actually cost Money and Civics for construction. And to help bolster your research output, the Research Facility has been added to the game, using a model provided by the great @GeneralWadaling .

With an influx of new structures, we're going to need some new research to go along with them. Three new techs were added in this update (all brought over from MC1), which are Basic Networking Infrastructure, Basic Education, and Advanced Chemistry.


Things I Forgot to Add 😕

In addition to what was added, there are a few items that were on my list that I forgot to add before submitting the build to Google Play, so they will probably be on deck for v0.14.0. On the New Game window, I was going to add a button to import a backup save file, since right now you can backup your game, but never import it again. So that was a big oops on my part.

In addition, I was planning on adding a little conformation box when you are selling a building, since it is too easy to accidentally sell right now, but I forgot that as well. Oops again.

And finally, you were supposed to be able to assign text to the Commemorative Plaque, and I forgot to add that part! Well, it will be there next time!

Going forward, v0.14.0 is going to be yet another big content update. I plan on adding the beginning Uranium stack, including a miner, storage, and maybe a nuclear power plant (and if anybody wants to create a model of a Nuclear Plant, I wouldn't complain). I also want to start adding water based units and structures for the water world as well. And finally, My Colony 2 v0.14.0 will also be coming to the Windows Store, which should bring even more players and feedback into the game.

And at some point in the not-too-distant future, I am going to implement a suggestion by @Sobeirannovaocc and release a node based command-line My Colony 2 dedicated server, which you would be able to host on pretty much any device, even on a 24/7 cloud server. So stay tuned for more info on that.

Anyway, that is it for this release! I hope you enjoy it. Keep the feedback, suggestions, and bug reports coming, and stay tuned for more MC2 in the coming weeks!