New Features
Crew Specialists - It may benefit your trip in various ways.

Will Internet Utilities featured?
(Referring to my post: https://www.ape-apps.com/viewpage.php?p=31612 )

Sobeirannovaocc said:I love those drawings, as well as the ideas for a few buildings! To get along with the idea by Ansom, maybe rework a little to have simpler, cubic designs (of course keeping differences)
You know you could get one of those drawing tablets that connect to the computer, I'm sure you can get used to it fairly quickly.


. Vehicles
(T1) Kamikaze Rover - These destructive rovers will definitely blow up everything on the way.
(T2) Mortar Light Tank - A light tank mounted with a mortar instead of a turret specialized for breaking defenses.
(T3) Artillery - When enemy has got reinforced defenses you'll need it. Enormous splash damage included.
(T3) Missile Tank - Slow, weak armored, but strong long range units capable to destroy both land and air units.
(T2) Walker - Basic meches, slow but tougher than the tanks.


I have other idea for robot:

Instead of independents, AI singularity: pretty much robot become like normal colonist.

Instead of food, rum.

No building focused on research, but each colonist increase a little bit the production, like a server farms, or borg, or daleks.. ecc ecc.

But essentially, when i prove new civilization here, i search new game style, because the civilizations can't be all the same, with only name buildings different, and the same game style.

Very nice ideas you’ve got here dude 😁 ( @Ansom )
I think now I have a illustration how I should design its colonists.

Sobeirannovaocc said:Good idea but it is conceivable that machines organize in a society, with jobs, entertainment, diplomacy, government and even happiness (approval rating)? Those are big aspects of the game.
Maybe they could be semi-robots, like have an organic brain inside the robot. They could be enslaved creatures by the ancients and trapped in an immortal, robotic body. This would allow a bit of randomness in their comportment and make a civilization possible.

Wow, that will make stuff more reasonable. Thanks to your suggestions!

cry8wolf9 said:Looks promising
Have you thought about making some of the image files? You can get information on how to do it here
https://www.ape-apps.com/viewpage.php?p=28

Thanks @cry8wolf9 (^ω^)
Actually I have (very) poor computer drawing skills 😶 (and seems needs practise). So I think I’ll prefer hand-drawing presentation instead.

I have a little idea to present here...
The AncientBots!

Here are some arts for its buildings.
(New) 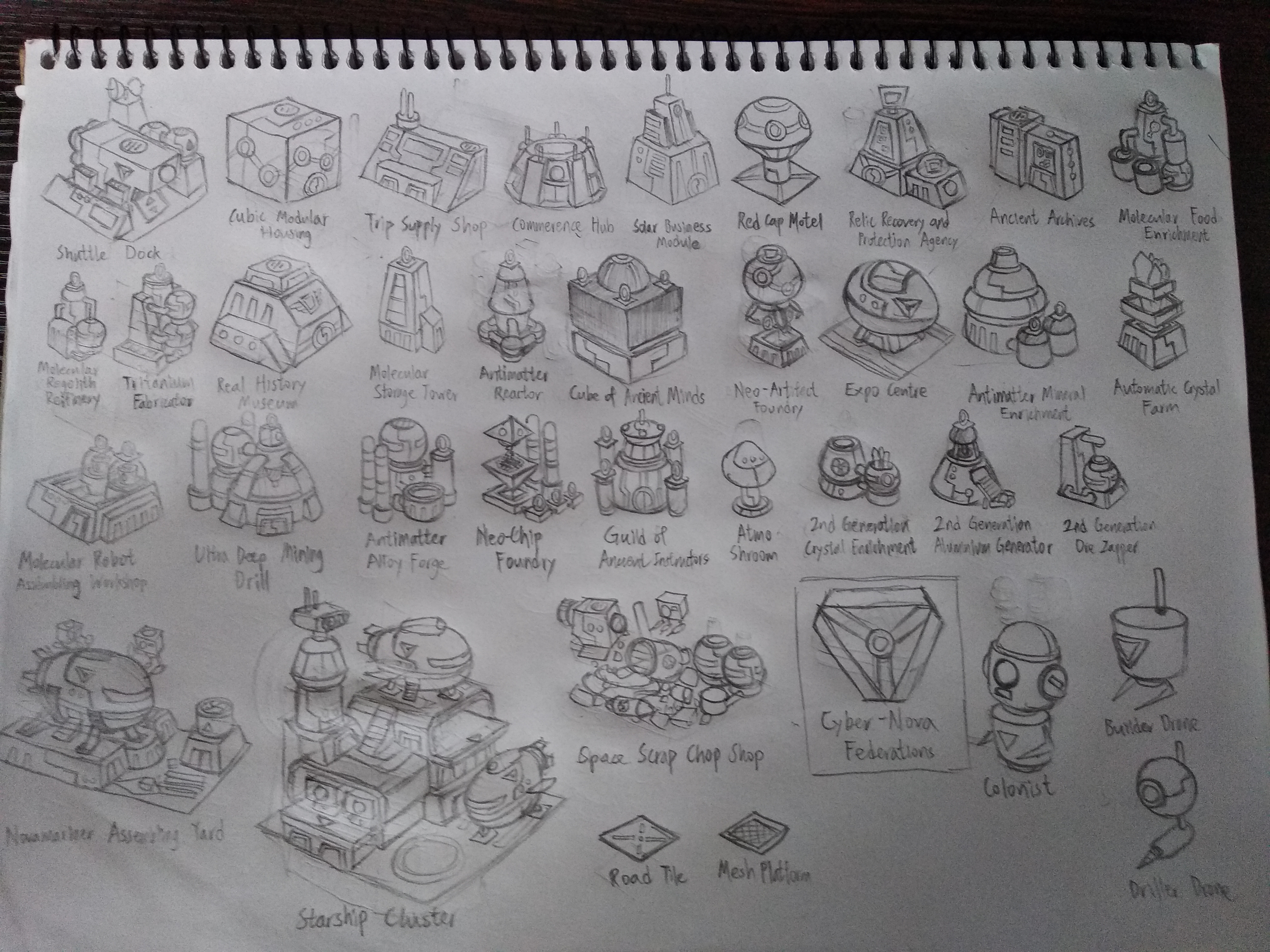 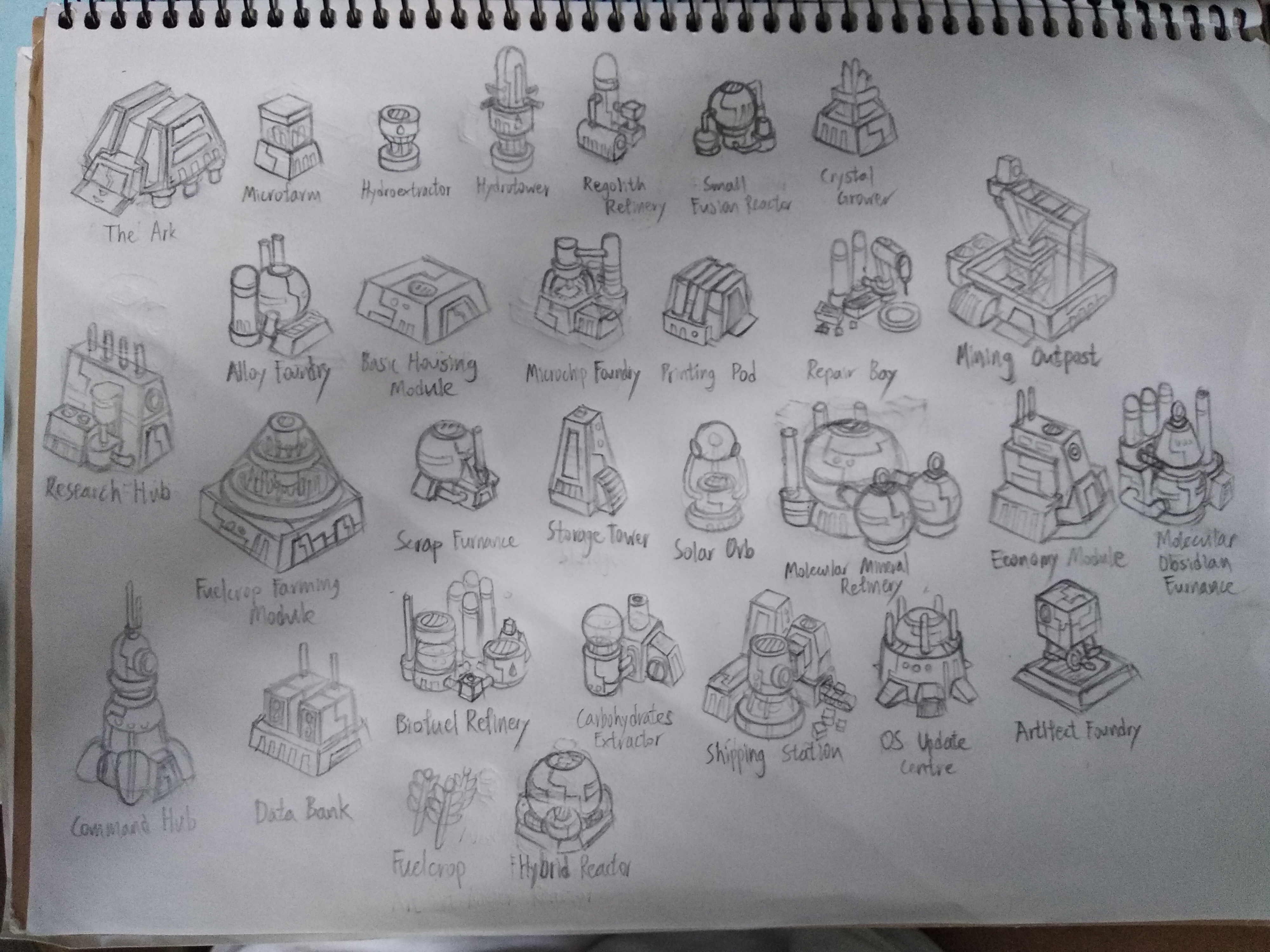 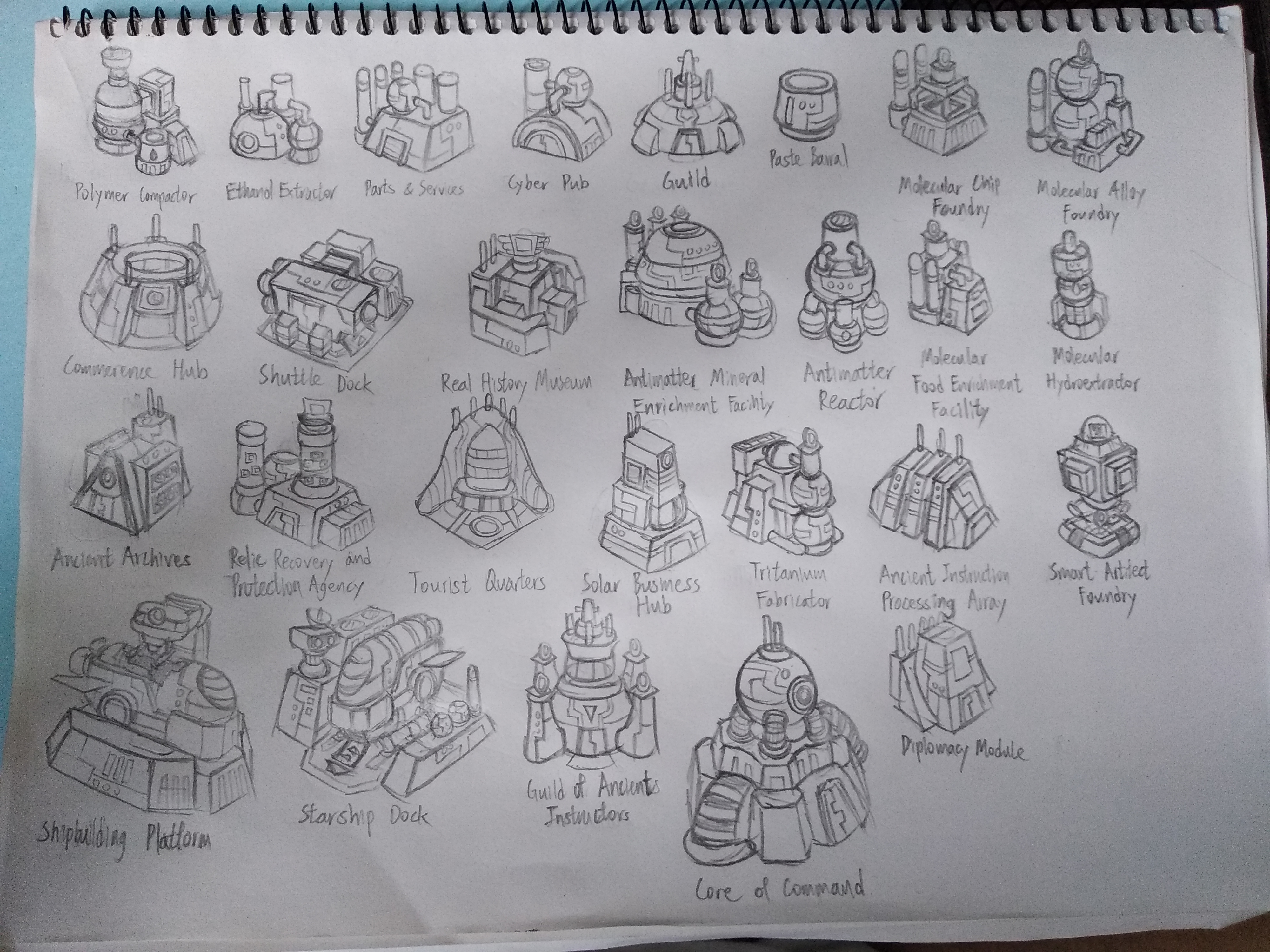 • The Ark is the landing craft of the AncientBots. Houses 5 people with little ability to supply food and water. Provides 5 power, and it can build some basic vehicles for this civilization (as every civilization needed).

• Guild is a civic centre.

• Printing pod provides population; as well, it can build a wider range of vehicles.

• Repair Bay and Parts & Services are ‘medical’ facility for them.

• Microfarm grows fuelcrop only, not food. Food must be obtained from Carbohydrates Extractor, consuming fuelcrops.

• Shipping Station gives both export and import function, but does not give tourists unlike its upgrade Shuttle Dock.

• Ancient Archives converts alien relics from Relic Recovery & Protection Agency into ancient instructions, which is a widely used consumable for mid-to-late stage for this civilization.

• Data Bank is a internet utility. To know more about internet utilities please refer to this post for reference: https://www.ape-apps.com/viewpage.php?p=31612

• Molecular Mineral Refinery and Antimatter Mineral Enrichment can turn ore into more ore, along with minerals.

• Do you know they also drink rum as ‘entertainment’? These alcohol fuel will give them refreshments as well power ’em up - boom. Optimized status.

• AncientBots are the only civilization left who know to make artifects from the raws. So they have the Artifect Foundry.

Wadaling
3y ago
RE:Zolarg Roads and other
Wise to have better roads for insectnoids. (for non-premium players; and alumimium road actually don’t seem fit insectnoid style so we’ll need some more insectnoid-styled roads)

Wadaling
3y ago
Security and Crimes!
Hello guys!
The name is Wadaling.

Security is supposed one of the challenges to rule a new established colony, however there is no such mechanism in this game yet. To give the game more challenges, here I will present my ideas about Security and Crime .


Mechanism
How a crime occuar? There are three conditions that determines the chance for a crime outbreak:

1. The colonist’s savings is below poverty line, the lower the savings, the higher the possibility for the colonist to perform a crime

2. Colonists has a bad opinion on your governance. (overall governance rating below 65% will begin increase chance for crimes)

3. Weak security, showed by security ratio (will be introduced below), when it is less than 100%. The lower the higher chance for a crime.

What is security ratio?
Security ratio is defined by the security staff on duty, security facility under operation, total population and running immigration/tourism facilities.

Here is how it defined:
Security Points/Crime Risk Points (×100%)

Once there is a crime outbreak, the colonist being robbed will lose money. If a building is targeted, instead of colonists, the government lose money (or resources) , while the building will take damage.
Low security ratio also leads to illegal immigrations. Triggers when it is below 65%.

Wadaling
3y ago
RE:New Ideas for the terraformation aspect of my colony
I think lava world like map can be the penality for too-much atmo

Wadaling
3y ago
RE:The IT Industries!
Ideas Vol. 2 (insectnoids) released! Check this out!

Wadaling
3y ago
RE:Advanced Alien Workshops
Maybe someday we can make artifects ourselves out of some raw materials (I do mean, ores and minerals).

Wadaling
3y ago
RE:Advanced Alien Workshops
Actually I wish there are faster aluminium generators. The snail speed it has, that’s how the mid-stage aluminiun generation is a ‘painful’ process.

When you are looking into details and stats of a colonist, you'll see one of the stats showing Commute Length. I'm not sure whether it's related to happiness of a colonist, but I'm very sure that nobody wants long commutes all on foot. (and in my active colony, most of my people got "too-long" commute length, ranging from 24-45 for those I've checked) I would like to have my ideas about commutes and transports here.

Basic mechanism of transport
How do transport system run, according to my idea. There would be new buildings that will help people travel to various locations, such as, home, workplace, entertainment facility, and medical facility. When colonists (actually I want to include tourists as well) enter this buildings (only when the predicted shortest commute route length is over 20), they will use the service to 'warp' to their desired destination (right into the building), this greatly reduces commute length (on foot). transporting needs time, and time length for transport depends on the building. Better buildings usually has faster transport speed. Meanwhile, to limit its ability (other than time), each transport building has its capacity, means, it serves a limited amount of passengers in the same time.
Note transport facility only do one-way transport only. If the colonist wanted to return home far away from the workplace, you may need another transport facility near the workplace as well.
(P.S. this might gives wheels another use)

My ideas about transports (Buildings)

1. Light bus depot
The most basic form of public transport. Serves at most 25 colonists in the same time. Slow transport speed, but it is much faster than walking. Consumes wheels during the run.

2. Bus depot
A direct upgrade of light bus depot. Still slow as the light bus but it serves a lot more colonists up to 300.

3. Metro access
You can't call your colony a 'city' if you don't have a mass transit system like this. A faster transport station than buses, serves 100 people, and it occupies less space. However requires steel and wheels for maintenance.

4. Tube transit access
You can actually go to every destination very quickly (just within seconds!) with the vacuum tube, although it serves up to 180 people only and consumes lots of power, however, it is better that its efficiency is way higher than the buses.

5. Local portal
You should be happy about you can get access to any facilities in a instant!

1. Wormriders mound
Take a ride on this huge worm and it will take you to the destination.

2. Roadroller
Don't get confused with the human roadwork vehicle, it is just a bus for insectnoids.

3. Underground shortcut tunnels access
These secret paths has secrets to get to a destination quickly. You might think it is insectnoid magic, but actually it is just slick metal tunnel.

Available to Insectnoids and Human; and bingo, I take basis on both and comes with this idea, but it is with low atmosphere density, however, hot but not hot as the lava world. You can find lakes out of brine tiles, and blue moss-blanketed ground, and little steam geysers for minor amount of water temporarily (50k per geyser). Minor amount of crystals can be found too, as insectnoids will need them to survive in low atmo environment, for food.

Member
Member Since
February 27th, 2018
Welcome
Ape Apps, LLC is an independent software development company founded in 2010 by Brandon Stecklein. Over the years, Ape Apps has published over 400 apps and games across various platforms. You can get in touch with Brandon on Twitter or by leaving a post on his wall @bastecklein
Ape Apps
•Ape Market
•Ape Web Apps
•Soundboard City
•BackgroundBag
•Mad About Memes
•Ape Apps Store
•Ape Designs
•Official Discord Server
App of the Day