People mad of homelessness with 0% homeless 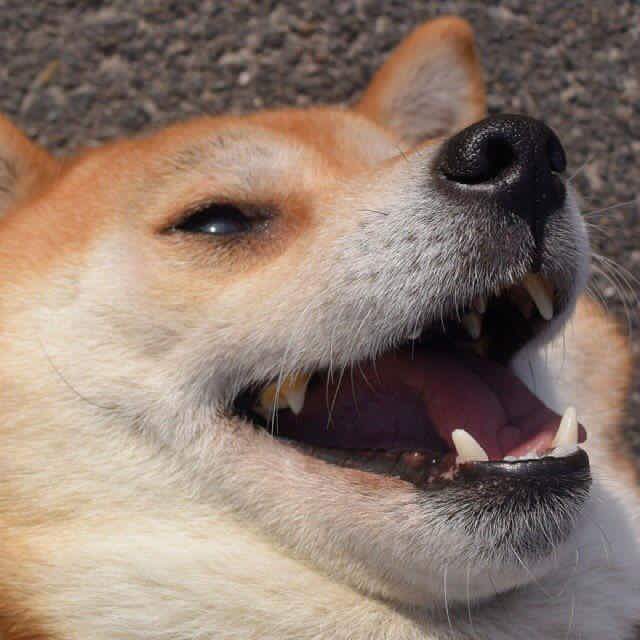 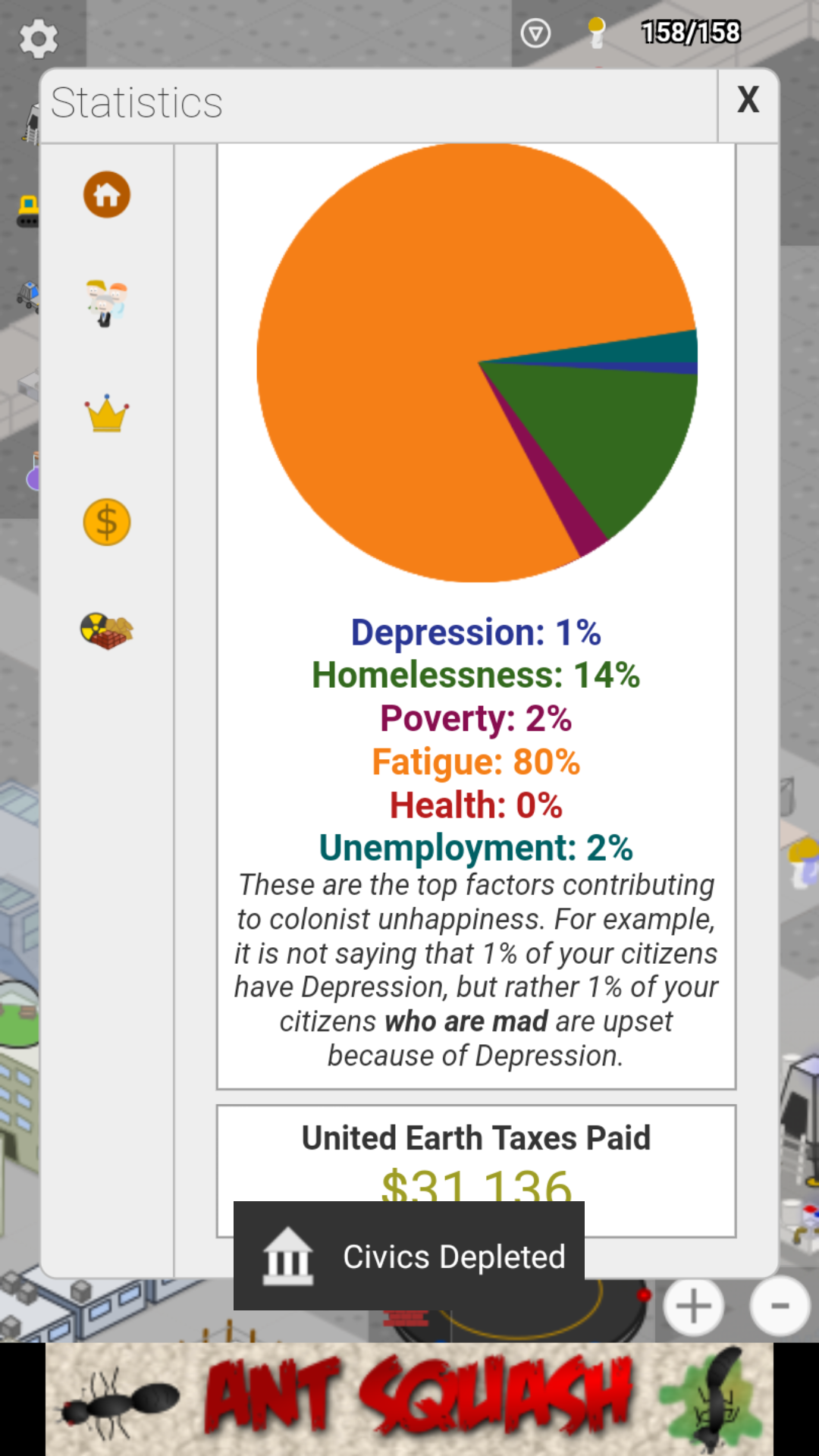 Here you see homelessness is kind of a slight issue 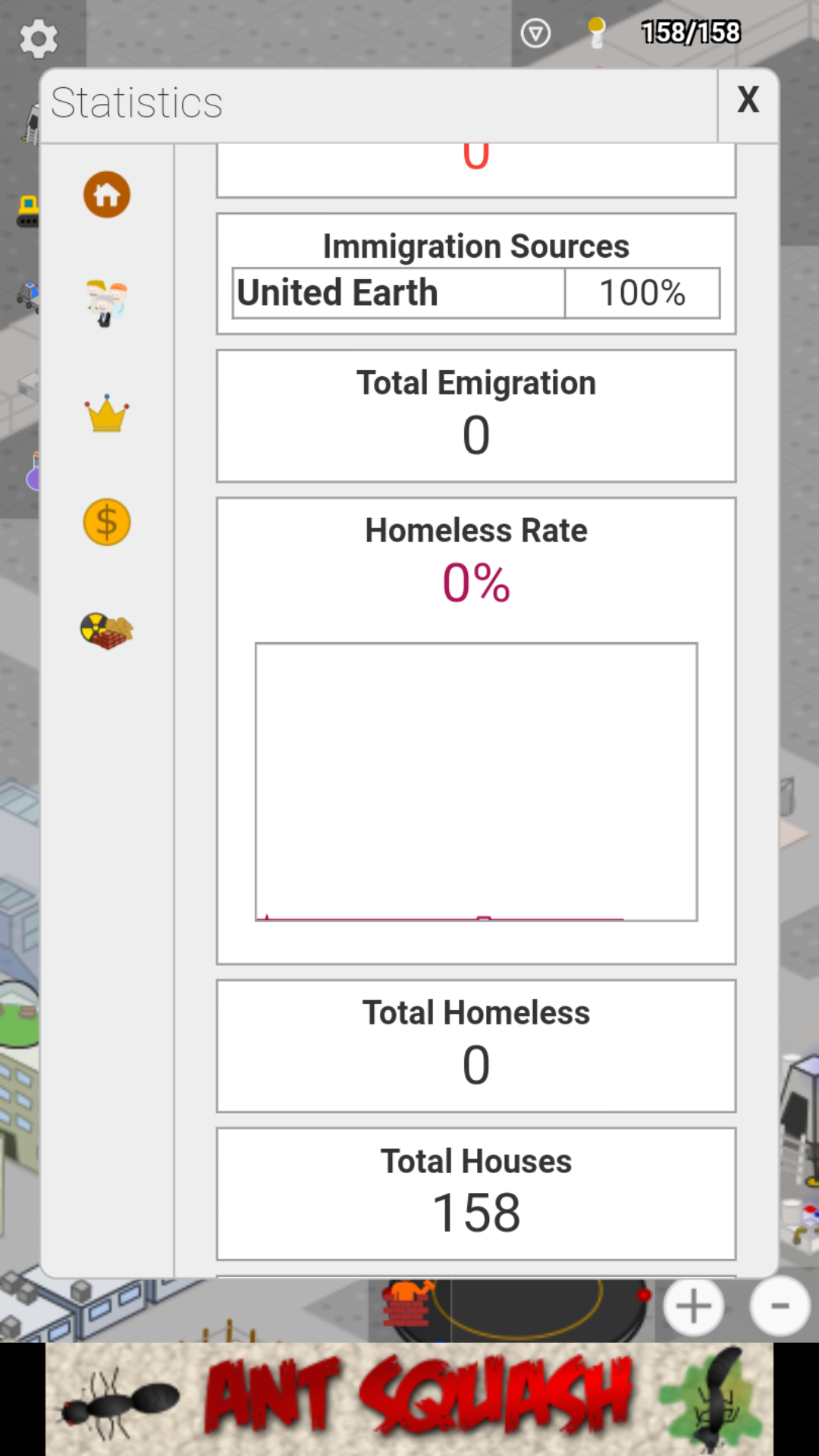 But there are no homeless people.

Vas
Member
Posts: 45
0
0
4y
#3
The game's charts are confusing and unhelpful, it shows 100% total at all times and therefor if one single person is mad, it'll show 100% of your population is mad because of x. If no one's mad, they'll all be mad from fatigue because they had to work that day, which is stupid. This chart needs to be rebuilt properly to show better, more reliable, statistics.

Akkupack
Member
Posts: 36
0
0
4y
#4
Agreed, but why homelessness? The issue has reduced since some time passed, but it is still there. Also, it does that for unemployment as well.

The chart should be made so that it also shows how many people are mad of x issue, and when no one is mad, the chart should say "0 mad citizens" or something.

Wubman
Member
Posts: 164
0
0
4y
#5
Read the message underneath the chart. "These are the top factors contributing to colonist unhappiness. For example, it is not saying that 1% of your population have depression, rather 1% of your citizens WHO ARE MAD are upset because of depression". Just because the chart says there is a small homelessness problem doesn't mean that there is a homelessness problem currently. It just people people who are mad are mad about that, which can be a handful of people. If you wanted you can think of it as a few people holding a grudge that there has been brief homelessness in the past for people just entering the colony.

Now if your approval rating is very low that chart becomes very useful because you can clearly see which problems are most likely to be causing the low approval rating. I do agree that there should be a statistic that tells you exactly how many people are mad, but i just assume that from the approval rating. 98% means 2% do not approve, so 2% contribute to the chart etc.

Also, that fatigue is very high, fatigue is generated not because they have to work but because their working space is more than 20 squares away from their accommodation. Now if their accommodation is less than 20 spaces away and fatigue is still a problem, they are likely choosing working positions further away and you need to fire drill. Make sure you have large food storage while you do this so they don't run out while there is no one producing food. I find that if you wait for current jobs next to accommodation to be filled you don't get any fatigue. I have had 1% fatigue almost the whole game like this.
Hello! I am a High Wizard from the Nations of OZ, come check out our discord server! https://discord.gg/qqCswpF

Akkupack
Member
Posts: 36
0
0
4y
#6
Sorry for necro, but I preferred not making another thread as this issue still seems to happen in version 0.67.

Another colony, 100% approval, people mad of homelessness, depression and unemployment even with more houses and jobs than there are people. And yes, I know how the chart works, but what happens when all people aren't mad of anything? It just falsely claims that people are mad for a random reason? Why?

With a small ish colony (round 400 colonists) and 100% rating it should mean that there are only a maximum of 4 people mad. Some calculations tell me that the chart ratios dont really fit well with just that few people.

Immigration disabled for a decent chunk of time so that the graph can't show the unhappiness of past immigrants (as you mentioned), and still happens.

Don't mind the fatigue lol, workplaces are rather far away as I have 4 districts for my colony: housing, government and entertainment, light industry, heavy industry. A light work policy just zeroes out all fatigue as it seems.

colbya
Member
Posts: 1094
26
0
4y
#7
frankly the stats was MUCH more usfull long before all the changes you COULD find which colonists was made and give them money or move them or many other things .
But now every thing is darn near automatic .
Bast reduced micromanaging because most kids dont want to thing is he could have kept it because ether way thous who iggy stats Still iggy stats .

I still miss being able to micro manage my self .
As for the homeless thing well at one point you have lets see 14 % of 157 around 15 or 16 wo were homeless the game can take ages to update stats at times .

Refreshing the game helps and if your using chrome there isa fix that works instantly deleting Chrome cache NOT the browser history- using - MORE tools then developer tools then right clicking refresh on left top then clicked clear cache and hard reload fixes darn near every error .

Akkupack
Member
Posts: 36
0
0
4y
#8
My standards for "refreshing" are saving, exiting, getting back, as I am on Android. Usually that fixes minor issues with employment and whatnot. But the chart still shows bullcrap.