bastecklein
Developer
Posts: 2904
785
0
2y
#1
The upcoming My Colony v1.5.0 is making some fairly substantial changes to the way importing/exporting and auto trade works. These changes are something of a conglomeration of different ideas posted about the system in the suggestions forum.

Beginning with the coming update, once you have unlocked the Galactic Board of Trade (or the equivalent building for the other civs), Importing and Exporting resources can then be conducted centrally from the GBT without going to one of the individual import/export buildings. The GBT also unlocks import/export for all resources available on the GBT. Importing and exporting from the GBT gives you the same trade capacity as you would have for buying/selling contracts on the GBT. 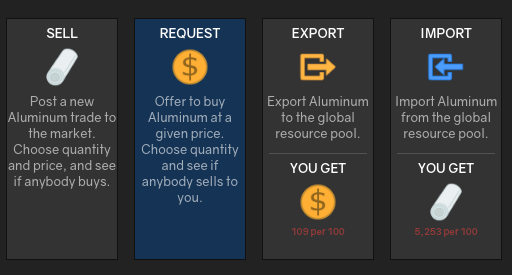 In addition to this, auto-trade now uses the Import/Export system instead of creating GBT contracts. This means that the prices you get for goods are worse, but it also means that you wont have tons of unsold contracts. The goods you buy and sell on autotrade go through the same global resource pool as regular imports and exports, and will impact prices accordingly.

Of course this change allows you to do things you couldn't before, such as import Ether and Cobalt. I think this is ok though, since it is only allowed once you have the GBT constructed, at which point you could purchase those goods on the market anyway, although this does let you purchase them when none would have otherwise been available. This will however raise the global price of said goods, which should increase production anyway, so I think it will all work out.

This also allows you to sell resources on auto-trade that normally have no demand, such as Food and Water, etc. Again, the prices you get will not be great, but they will be better than the 0 that you would normally get from a returned contract that expired on the GBT.

Regardless, with this new system most of the changes are being done server-side, so they can be tweaked without the need to release a patch to the game, so I think it will all work out. The main idea is to get the auto-trades off of the GBT, which has become flooded with rubbish. The GBT will now be exclusively used for real trades posted by real people.
Owner of Ape Apps, LLC

The global resource pool can never run out

So, will be able to create resources if need it?

The server will also be able to consume GBT contracts in order to restock the global resource pool (contract owner will get paid), if contracts are available.

uhm, the price will change consequently?

Just for avoid a player buying for few bucks resources in the import system, and selling again to the "resource pool" in the GBT for crazy money.

bastecklein
Developer
Posts: 2904
785
0
2y
#3
If the server purchases a GBT contract to refill the resource pool, it would have the same impact on price as if another player had purchased the contract. The server already limits contracts sold at super high/low prices from impacting the running price.

And if the resource pool is empty and there are no contracts available, then the evil galactic emperor will just "will" some new resources into existence and raise the base price a bit, based on the quantity created. The level to which the price is impacted will need to be tweaked as I observe it working in action though.
Owner of Ape Apps, LLC

Sobeirannovaocc
Member
Posts: 380
59
0
2y
#4
From what I understand, if I buy the entire resource pool while posting contracts on the market at a higher price, as the pool runs dry, the server will buy my market contracts and I'm making money from nothing.
Can this happen? (Edit: just realised I assumed fees are lifted, if fees are not lifted the answer should be no)

Also are import/export fees lifted? If yes then the prices would be more or less arbitraged, and there would be no point in posting market contracts, people would just import/export
Creator of Coloniae
Admin of the MC2 translation project

bastecklein
Developer
Posts: 2904
785
0
2y
#5
@Sobeirannovaocc the extreme fees are still in place, so you cannot really manipulate the market any more than you can presently using import/export.

I see what you are saying, but I think the system would be hard to game, as the "Galactic Trade Authority" already rejects all contracts that are priced a certain percentage above or below the rolling average of the last x number of trades (I forget the exact number), and you would be taking a large (I think 75%) haircut on the value of the resources every time you imported.

Not to mention if there were in fact GBT contracts available on the market, you would be better off buying them then paying the large import fees to try to buy out the resource pool, which will probably be fairly large for a lot of resources once the update goes live and they start getting loaded up with auto trades.
Owner of Ape Apps, LLC

bastecklein said:
The GBT also unlocks import/export for all resources available on the GBT. Importing and exporting from the GBT gives you the same trade capacity as you would have for buying/selling contracts on the GBT.


We will only need to build the import/export building for other reason? Like increasing gifts cap, or online black market (is a little converter).

The classic import/export building seems to have the same resources lock.

bastecklein
Developer
Posts: 2904
785
0
2y
#7
So the GBT does not raise or lower your import/export cap, that is still handled by the individual buildings, so you still need to build them.
Owner of Ape Apps, LLC

KlingonDragon
Member
Posts: 38
4
0
2y
#8
Does this mean I can put my ether collectors and ether rovers next to the infinite ether lake and use the auto trade to get infinite money?
My Colony Discord Server - https://discord.gg/dvJSKBB