If you've ever played My Colony 2 and popped open the Statistics window, you may have noticed this mysterious section: 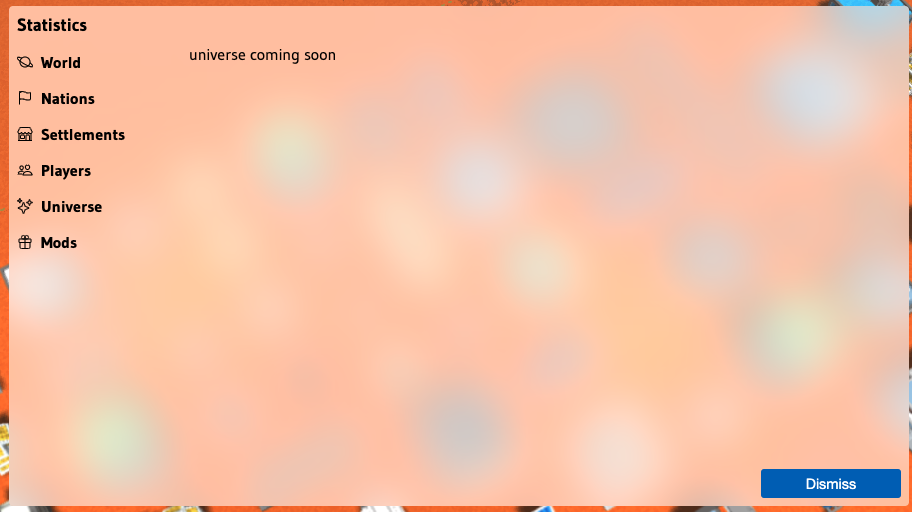 So what is "soon" and what is "universe?" Well soon is v0.21.0, and Universe is the new, more decentralized way that different worlds can interact with each other in My Colony 2.

The original My Colony had a centralized multiplayer server, but Multiplayer was limited to chat and online trades. My Colony 2 features real time online multiplayer, but is limited to players playing on the same world. Universes allow individual worlds (aka servers) to expand by connecting to each other, extending in-game chat, resource trades, and other features across servers.

This is a decentralized approach, and not every game will be in the same Universe. Anybody can create a new Universe, and anyone can join an existing Universe, provided they have the credentials.

To create or join a Universe, all you will need to do is go to the Universe tab on the Statistics window and enter a public key and private passcode. The key and passcode can be anything you want, you can make them up out of thin air. The passcode is optional. You will then be connected to any online servers who are using the same key and passcode combination. That's it. You can share your key and passcode with anyone you want, or just keep it private between friends.

In addition to the public and private keys, there is a third key that is hidden from the player, but is built from a hash of all of the game data objects in your MC2 install (aka mods), ensuring that only games using the same game data files will be a part of the same Universe (imagine the problems if games with different data items could conduct trades).

There will be no public directory of Universe keys, so the only way to give out your Universe information is to do it yourself. Of course, if you are wanting to build a large and inclusive Universe, you can post the information publicly on the forum or elsewhere, but that is up to you.

Universe will be the headline feature for the upcoming v0.21.0 release, and there will be more information as development progresses, but if you have any questions/ideas/suggestions for this new feature, you can reply to this thread.
Posted by


if you are wanting to build a large and inclusive Universe, you can post the information publicly on the forum or elsewhere

We will need to discuss automated stat reporting endpoints, as I want to add the feature into the game for v0.21.0, but it can't work the same was as it did in MC1 and needs to be made a little more generic.

Given the modding capabilities of MC2, it is conceivable that some future mod creator would want their game stats reported to their own server somewhere instead of to coloniae. Also with the potential for so many games to have differing data sets, we will need to make sure to compare "apples to apples" when putting together a database of colony statistics.

I am going to add a new field to the Metadata section of the Game Editor for stat collection endpoint URLs. Multiple URL's will be permitted, separated by commas, and the game will report information by the minute. Reporting will only be done by the Server instance, not by client players connected to the server.

The data will be sent using standard HTTP post, maybe with a custom header to signify that it is coming from the MC2 client. I don't know if maybe it should also have some sort of rudimentary authentication system, like maybe the MC2 client will need to first get an access key of some sort from the reporting end point that can be included with all posts. Clearly with MC2 since anyone can just look at the endpoint URLs in the game editor, it's not going to be totally secure, but we are just collecting raw stats without any secure info. I just don't want people to be able to abuse it and goose their stats somehow, although it could also be made sufficiently complicated to where it's not easy to send bad data anyway. I mean technically someone could send their own MC1 data to Coloniae right now if they wanted to dig into the MC1 source code and look at how it works.

Really it could just be on the endpoint maintainer to see where the request is coming from, and to look at the data and see if it seems legit. All real MC2 requests will either be coming from apewebapps.com or the Android/iOS client, so anything else could be considered a bad request.

Anyway, the posts made to the endpoint, besides for data related to the game world, should also include the Game Identifier uuid string from the Metadata game object so that info from different mods can be segregated, as well as client version, a checksum of all of the gamedata objects so that you can easily tell what data is coming from the same version/client, etc. Perhaps when a world is first loaded, it can also post that same checksum along with a list of all game data items installed, so there can be a reference there too.

Anyway, I want to start testing some basic stat collection with v0.21.0. I am going to set up my own stat collection endpoint for testing, and if you want to make one for Coloniae @Sobeirannovaocc then let me know and I can get an endpoint URL added to the official Metadata game object. You can just create a dummy script there for the time being and develop it later if you want.

Also sobe at some point soon here I am just going to purchase a cloud server instance for Coloniae and give you access to it. My internet connection (and electric utility) has not proven to be good enough to host a production website, lol.
Owner of Ape Apps, LLC

bastecklein
Developer
Posts: 2883
767
0
1mo
#5
You know it also occurred to me that I can make it so that the individual game server can also specify their own stat reporting endpoints. In this way, a private group of players could set up and maintain their own kind of stat server/leaderboard system.
Owner of Ape Apps, LLC

bastecklein
Developer
Posts: 2883
767
0
1mo
#6
OK so the more I thought of it, I don't think the game will include any stat reporting service by default. At least not until all the kinks are worked out. Then each game world can opt-in to stat reporting in the world Statistics screen.

I think that this method respects the open modding nature of the game, and makes it easy enough to just copy/paste a reporting URL into the game. This also allows a player to easily set up their own private tracking server if they are running a dedicated server.

It would also allow a stat server maintainer to optionally implement their own security, such as a private API key embedded in the URL, matched to the server id (or perhaps the player's Ape Apps Account for using the same key on multiple worlds, etc).

This also makes it easy to test and build a custom stat collection endpoint, as it doesn't require changes to the game metadata file to specify a new endpoint.
Owner of Ape Apps, LLC