The difference from this news ticker though is that it supports custom news feeds from third party news servers, and the server owner can set up multiple news feed sources that it's players can utilize by setting them up in the Statistics window. This can be a fun way for an MC2 server to differentiate itself from the rest,add some fun for it's players, or even just offer news items in different languages. 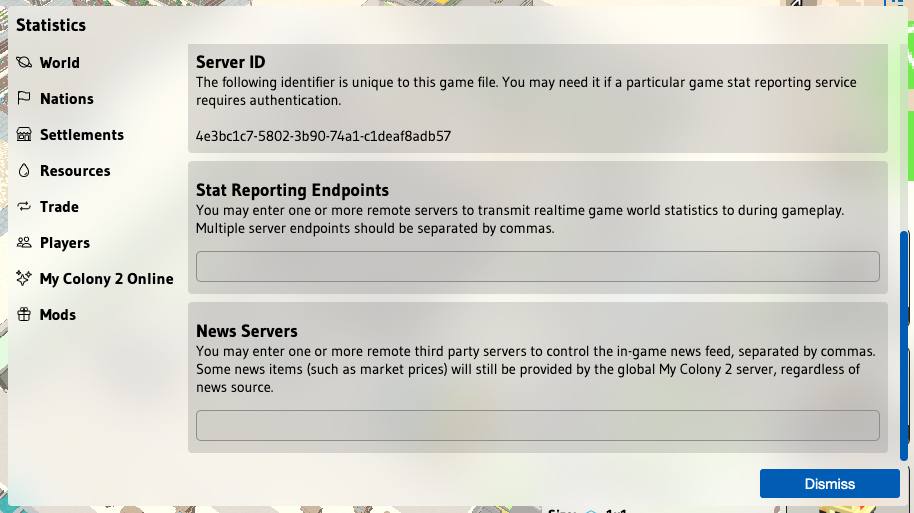 Setting up a custom news server is not necessarily a beginner task, but it is not overly difficult either.

You can setup your news server however you like, it just needs to be able to accept a JSON object from the My Colony 2 client as post input, and to print out a JSON object as a result. You should also set the access-control-allow-origin: * header, so that the client can access your script no matter which platform it is running on, and probably the access-control-allow-headers: Content-Type header.

This post will be updated as the spec evolves and more features are added, and can also be used for questions, and feature requests.

When a My Colony 2 server first boots up, it will query it's news servers with the following post data:


taglines is a string array which can contain one or more "taglines," or random headlines that the news ticker will play when there is not much going on. An example could be something like: You are watching MNN - The most trusted name in news.

healthcrisis is a string array containing responses that will play when a settlement is having a low health crisis. It includes two properties that will be auto-populated by the engine. ex: There is an ongoing health crisis in #settlementname! Will #ownername do anything about it?

techunlock is a string array containing news items for when a player unlocks a new technology. ex: #name has unlocked #tech

ollargestsettlement is a string array for when the global MC2 server announces what the current largest settlement in the entire My Colony 2 online galaxy is. ex: With a population of #population, #settlementname on #worldname is the largest city in the galaxy!

starvation is a string array containing announcements that a settlement on the world is facing starvation, ex: #ownername goes into hiding as #settlementname residents resort to cannibalism!

lowapproval is a string array containing news articles about a settlement owner's low approval ratings, ex: Time for #ownername to go? #settlementname residents are fed up with current leadership.

lowsecurity is a string array containing news items about the low security rating in a settlement, ex: #ownername plays the fiddle while crime wave spreads through #settlementname!

loweducation is a string array of news items related to a low education rating in a colony, ex: Brain dead in #settlementname? Residents demand education but #ownername fails to deliver.

The News Ticker is an exciting new feature for MC2, and the current feature set in this initial rollout is only the beginning. In the coming updates, the news ticker will also support positive news stories (most of the current ones are negative), as well as an option to query for stories that are unrelated to anything particular in the game, even stories that present a full news article when clicked on.

So let me know what questions/suggestions you have, and feel free to try to roll out your own news server, it really souldn't be too difficult!
Owner of Ape Apps, LLC

spamdude
Member
Posts: 118
43
0
3mo
#2
this is going to be very funny
Living the Spamlandian Dream

spamdude
Member
Posts: 118
43
0
3mo
#3
@bastecklein, what if the news system could be partially integrated into settlements themselves? You might be able to set rudimentary news messages in-game through the multimedia center, while also being able to access and choose channels from a large selection of "registered" third-party news sources for the game, similar to the mod menu in MC2.
Living the Spamlandian Dream