Introduction to the new Lava World

bastecklein
Developer
Posts: 2904
784
0
4y
#1
Here is some information on the new Lava World which will be available in the upcoming v0.52.0 update to My Colony! 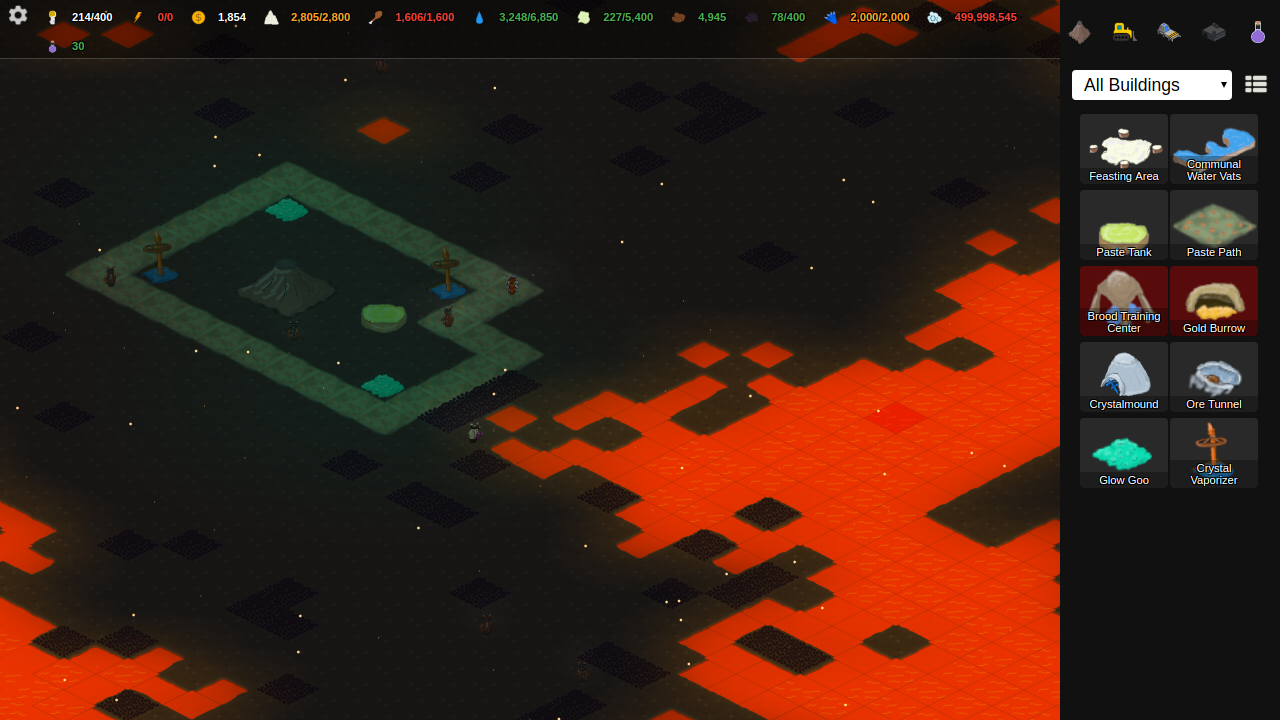 The Lava World is by far the hardest map type in the game so far. When you are first starting out, it will not seem like this is the case. It plays similar to the Ice World, except there is also Ore available, in some ways making starting out even easier than the Ice World.

What makes the map harder are two main things:

Lava Rivers
The Lava Rivers are constantly shifting. Areas of the map you were once able to build on will eventually be consumed by Lava. You can slow the flow of the lava by building Paste Path 'walls' in order to contain the spread, but that will only help you to an extent, because of reason number two:

Volcanic Eruptions
The Lava World is the first map type to feature natural disasters. The Volcanic Eruptions can happen any time without warning, spewing fresh lava across the land and destroying any structure or unit that happens to be in their wake. You will have to plan ahead to make sure your colony can survive if 20% of it were suddenly wiped out by a volcano. It will be wise to build multiple Mounds.

Speaking of mounds, you can no longer build them the old way, and you no longer start with one. Now on all Insectoid colonies, you start with a Queen insectoid, who you can fly around until you find a food nesting place. The Queen then turns into the mound. You can build new Queens at the Mound for colony expansion, but if your Mound gets taken out by a volcano before you build a fresh Queen, you will be in trouble. So make sure you build a new Queen as soon as you can!

So why would anybody want to start a Lava map?

It is the only map type that has access to a new resource: Obsidian. Obsidian is left behind as the rivers of Lava shift across the landscape. Once a Lava River has moved to a new area, you will have to fly a Queen into the old one and get the Obsidian left behind before new Lava arrives!

Obsidian will by exportable on the GBT and Humans and other Insectoid colonies (as well as Reptilians) will be getting new Obsidian structures.

Also, when a Volcano erupts, it leaves behind other rare elements that are not originally found on the Volcano map, such as Gold, Uranium, and Diamonds.

That is the new Lava World in a nutshell. It makes heavier use of the particle and lighting effects than any other map, so if it degrades performance, both can be turned off completely in the Engine Settings menu.

If you like to have a big permanent settlement with a large Commonwealth attached, the Lava World will not be for you. It is a micromanage map best suited for Obsidian mining and exporting, and you can expect large portions of your Colony to be destroyed without warning. Players who have been wanting disasters in the game might enjoy the extra challenge.

As a side note, the Lava World will also be one of the playable maps for the upcoming Reptilians, which will be coming in v0.53.0.

Enjoy! The update should be done by the end of the week or early next week.
Owner of Ape Apps, LLC

colbya
Member
Posts: 1082
23
0
4y
#2
Amazing o the games working great again .
really looked at lava world was like naa but man this post changed my mind go to try it .

bkudaimi
Member
Posts: 114
0
0
4y
#4
Will there be natural disasters on other maps like the forest world?

just curious since the queen can fly will she die if lava spawns under her?
it would make sense she would but then again she is flying.

nunez499
Member
Posts: 666
0
0
4y
#8
she flies over lava so if lava spawns under her it doesnt matter. Ive been playing the map whole die and its pretty challenging. so far i got only hit once by eruption in the middle of my base. the hardest part is getting gold.

bastecklein
Developer
Posts: 2904
784
0
4y
#9
I believe the Queen dies if lava lands directly on her if I am not mistaken. The idea is that it is an eruption so she should be caught in the wake. I have not had lava incidentally land on a queen yet, but I also try to have at least 3 mounds one I am established so that it's not an issue.
Owner of Ape Apps, LLC

So, are you going to make the lava shifting and eruption mechanisms disappear once atmosphere is lowered under a certain amount? I mean, with less atmosphere, the planet cools off, and then maybe the player can settle their colony permanently and even build obsidian extractors that generate obsidian. It would be cool to at least make the lava turn into obsidian and have water spread when atmosphere is under a certain amount.

Also, obsidian needs to have a specific purpose for lava worlds and for other worlds. What if one purpose of obsidian is to build structures/roads/walls/rovers/workers that do no die right away when exposed to lava? That way, the player can eventually get enough obsidian to build buildings that are only moderately damaged by erruptions and lava? Not sure what other races will be able to build with obsidian, since UE Already has some very advanced stuff built from triantanium. I mean, unless you want to aim for providing for billions of people, I wouldn't make another tier of buildings.

Will any humans be getting this world type?