bastecklein
Developer
Posts: 2954
873
0
2mo
#1
Today, Basic Modeler has received it's first major update since becoming it's own app and moving to it's own domain (basicmodeler.com), and this update is fairly significant, so let's take a peak at what is new! 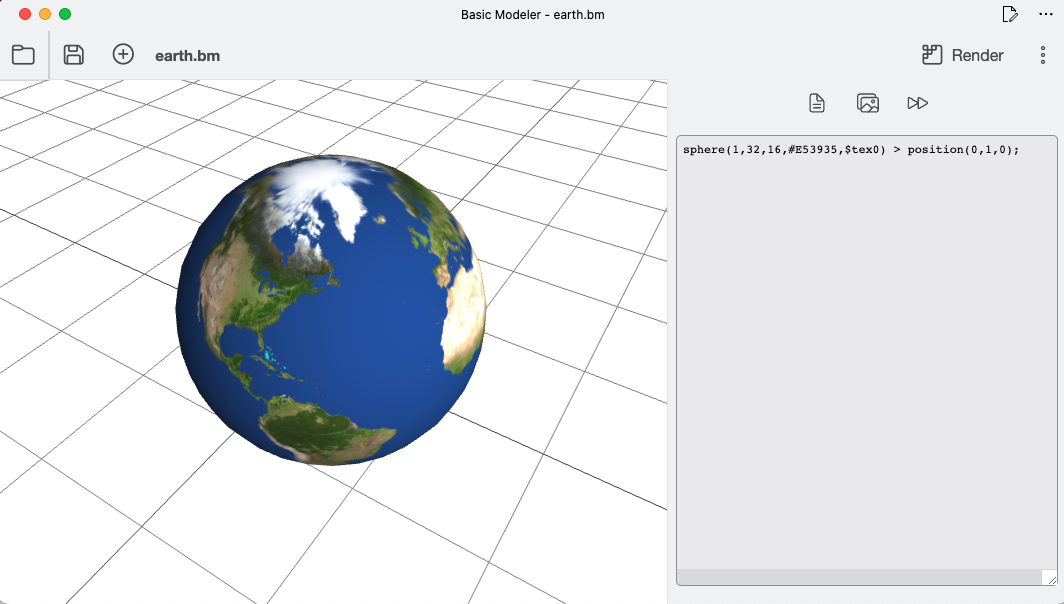 To begin with, Basic Models now support texturing, which is a huge improvement over plain color models. You can see an example in the image above, where an Earth texture was applied to a sphere. Adding a texture is fairly straightforward. There is a new Textures panel next to the code input panel, and each texture you add to the model gets a new variable name (ex $tex0, $tex1, $tex2, and so on). I will do writeups in the new Sharing and Examples forum soon with examples and instructions on how to apply textures to each different type of primitive shape that the app supports.

With this update, the #scroll3d engine now includes full built-in support for rendering Basic Models, so future games written using the engine will be able to use Basic Models for graphics, as opposed to (or along side of) Voxel Paint models. I am also in the process of overhauling the Death 3D engine (which also powers the game Dungeon Infinity) to use Basic Models instead of Sprites for game objects, which is a pretty significant undertaking, but was somewhat necessary to facilitate the support of full VR for those Death 3D based games, which I am also in the process of working on.

I have added a new mobile-friendly layout to Basic Modeler in this release, so the application can now be "used" on a mobile phone. I still do not suggest using it in this way, but the possibility is now at least there.

Basic Modeler now has a new Add Object button, which will automatically create all of the primitive types that the system supports, as well as a few small example objects that you can look at to get a better understanding of how Basic Modeler works.

Finally, Basic Modeler now support full file type associating when installed as a desktop PWA using a chromium based browser (Chrome or Edge). If you install Basic Modeler as a PWA, you will now be able to simply double-click on a *.bm file on your computer, and have it automatically open up in the app.

What is the point?

So you may be wondering what the point of Basic Modeler is, what it's for, where it fits in the Ape Apps ecosystem, and why not just use something like Blender to make models?

The primary reason for the Basic Model system is to be able to quickly and (somewhat) easily generate 3D models in code, so that a future game engine of mine can automatically create new items/objects on the fly.

A game could, for example, have a sword, and the game package could include one base sword.bm model file, and through code, several different sizes, shapes, colors, and other variations of the sword could be generated by making simple small modifications, to where the game could include hundreds of different swords based on the same model script.

Anyway, I do not necessarily except anybody other than myself to be using Basic Modeler, at least not until a game comes out that uses it and supports modding, it is there to play with nonetheless, and is going to be an important part of content creation for Ape Apps games in the future!

What is coming next

The next major feature I need to add to Basic Modeler is model animations. You can already do animations in code if you assign your objects to variables, but I want a way to predefine them within the model file so you can automatically run them by simply setting a flag. So that is what is next for Basic Modeler.

So anyway, if you are on a desktop computer and interested in modeling, you can check out Basic Modeler today!

itsLiseczeq
Member
Posts: 101
59
0
2mo
#2
jeez i almost thought you misspelled "modeller" in the domain name but modeller is just the british spelling.. smh english language is a joke
Have a fantastic day!
~cakedon (formerly itsLiseczeq)