I hope everybody had a good new year. I am now ready to get back into the full swing of My Colony development, and what better way to start things out then with the Reptilians Update Part 1! There are actually several new changes in this release too, so let's take a look: 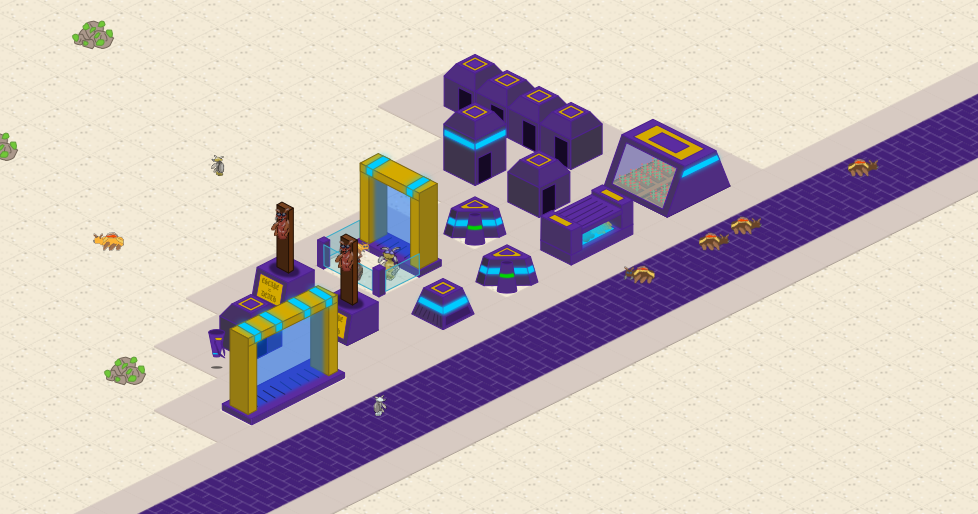 The biggest outward-facing change in this update is the new civ, the Alpha Draconians. They are in the early stages, but expect them to ramp up alot faster than the Insectoids (because of the art style, it takes me way longer to make Insectoid graphics).

So the Reptilians are a very high-tech species, and start off the game with many of the things that the other civs can only dream about at the beginning. They are also a brutal, evil, and warlike people. Their homeworld is near Zolarg Prime, and they regularly abduct and enslave poor Insectoids to work their colonies for them. That is nothing compared to what they do to the humans though, but that is for another update!

Unlike Insectoid colonies, the Reptilians require very few civilians, so expect the colonies to have very high GDP/Capita ratios. There isn't a whole lot to do with the Reptilians yet, and the Lava World isn't completely playable with them, but go ahead and check it out. There is a whole lot more coming soon.

Now for the other new feature, Local Multiplayer.

Local Multiplayer is currently very experimental, and as of right now it is only available on Android, iOS, and Native Client. Ironically, it works the best on the Windows Store app, but Windows Store security policies would not allow me to submit the app using both a webview and private networking, so I had to remove it after it got rejected and the feature may never come to Windows Store.

For Web users, I am currently working on a Desktop application called the Ape Web Apps Desktop Bridge which will allow Web clients to use both LAN play and saving your files directly to the local file system, but it's not ready for release yet. Possibly next week.

So in theory, to use the Local Multiplayer, you don't have to do anything special. If you are playing on your Android and another Android, iPhone, or Native Client user opens one of their colonies, you should just get a notification that another colony has come online, like the current Commonwealth notifications for online play. You can then send messages/resources back and forth the normal way, using the Consulate, Capitol, or the little Communications buildings. Keep in mind this is for Local (offline) games only.

I say 'in theory' because I have only tested it out on my own home network, and I only have so many devices to test it on. So your mileage may vary. Let me know how it goes!

For online games, the in-game commonwealth chat is there, and is accessed by a orange chat icon on the bottom right of the screen. It's pretty self-explanatory. Requires an Ape Apps Account.

Speaking of Ape Apps Account, if you sign in, it should now sync your in-app purchases across all platforms now, but this is also experimental, it might take me a couple of updates to get it working right. 🙂

So that's about it for this update, unless I forgot something. The next few updates will be bug fixes, performance improvements, and Reptilians. As I said the Reptilians will fill out a lot faster than the Zolarg, as I am still not even done with the Zolarg (but I'll get there someday)! Let me know what you think of the update, and stay tuned for more!
Posted by

colbya
Member
Posts: 1102
29
0
5y
#2
game is running fine .
The new guys well lol yea noticed no job buildings yet 18 colonists .
Kind of grussum lol once people notice .
1 question I asked before exactly what is native client as I thought it was the desktop version ?
and the thing your adding for chrome to work with this is confusing me ?
The game will not be totally off line playable on chrome ?? in other words wile two off line colony's could trade chrome would still need to be online to play the game correct ?

Ps did find info claiming one or two guys figered out how to make browser based games Playable when the browser is not online at all this is why I ask
matter of fact guess its a good time to see what platforms can be Totally off line as in the device its self can be off line .
desktop ? android ? linux apple stuff but not chrome right ?

misteddawn
Member
Posts: 378
0
0
5y
#3
There are 3 places a windows users can get the game: Chrome (web version), Microsoft Store, and Ape Apps Market (native client). Both the MS Store and native client are desktop versions just downloaded from two different places and may have different features.

Offline/local play: For Chrome not sure how that would work either but could assume you can load the game and then disconnect from the internet. The only thing required, from what I can tell, is a local network for the games to communicate with each other.

bastecklein
Developer
Posts: 2967
888
0
5y
#4
Yes sorry for the confusion. Browser version uses service workers so that it can probably be played without an internet connection as long as you have previously cached everything.

The thing with the local multiplayer is that web browser security does not allow websites to use private TCP/IP sockets, so a website does not have access to your local network. Windows Store apps have the same restriction for apps that use a WebView, which My Colony does. I am working on a program that the Browser version of My Colony can connect to using Web Sockets (which are different from regular TCP/IP sockets), and then the desktop program it connects to acts as a proxy to connect to local network sockets. It's sort of convoluted, but I use it already for debugging, and it will be there for anybody who wants it. Most regular users are better off downloading the desktop version from here https://market.ape-apps.com/my-colony.html
Owner of Ape Apps, LLC

username
Member
Posts: 154
40
0
5y
#6
For the next update, there is a huge bug that has not been addressed. Colonists will not work even with plenty of entertainment and food. My colony is so big that it collapsed due to this bug. Sadly it has made the game unplayable for me and many others. I hope it gets fixed soon.

time
Member
Posts: 30
0
0
5y
#7
I feel like the Reptilians are going to end up too overpowered. There should be a critical weakness that they should have, like having ore be super expensive to make. This would make this race more balanced with the less OP civilizations.

malakhglitch
Member
Posts: 207
-1
0
5y
#8
The Alpha Draconians are a decadent race. Decadence and stagnation usually precede the fall of an empire no matter how "powerful" they are.

I tried out the Alpha Draconians, but ended up deleting my game to await further content.
Commonwealth of Groddle
Groddle | Bell's Pyramid | Glitch

colbya
Member
Posts: 1102
29
0
5y
#9
3 humans just showed up on my drac world kind of freaked me out lol
as for content sure its slim what do you expect personally I loved previews
the mini star gate makes it way to easy and even just selling water I have darn 1000 of each resource ( except for the ones that can be stored yet .
once you know the key to starting the colony its way fast

angryphil
Member
Posts: 9
0
0
5y
#10
So... no mention of the worker bug in the changelog. Can anyone tell me if this has been fixed?