Hello everyone, and welcome to another exciting edition of the My Colony Patch Notes! Today I am releasing v1.3.0, which should be hitting all platforms over the coming days. There are a handful of changes in this release, so let's take a look at everything that's new!

I had previously said that the next updates were going to involve Crime and Mass Transit, and in that spirit, this update is being dubbed the Crime Update - Part 1. New security structures have been added for each civilization that you can place around your colony now. Each security building has a 60 tile radius of influence. In the next update, Crime will actually be activated, so you have from now until then to get your cities ready to deal with crime. Crime will be largely based on land value, and if your colony is generally setup good, you can expect to need less Security protection vs all of the other land value-affecting structures (Education, Health, Entertainment).

To go along with the new structures, the Reptilian torture structures Torture Booth and Fair Warning have also gained a security protection stat.

Moving on, colonist rendering has returned to the game! 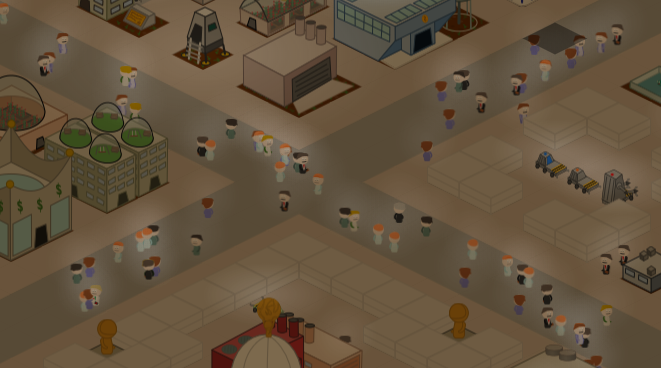 This time, instead of an on/off switch in the engine settings, you can choose via slider how many colonists maximum that the game will simulate. Obviously, the higher you set the slider, the slower your game will be. The default is set pretty low for mobile, but you can mess with it and pick the best visual/performance for your device.

There have been complaints related to Commonwealth members abusing the payroll assistance feature, setting astronomical wages for their colonists and bleeding the treasuries of their parent colonies. To address this, you will find a new Maximum Payroll Assistance slider in the Wage policy menu. 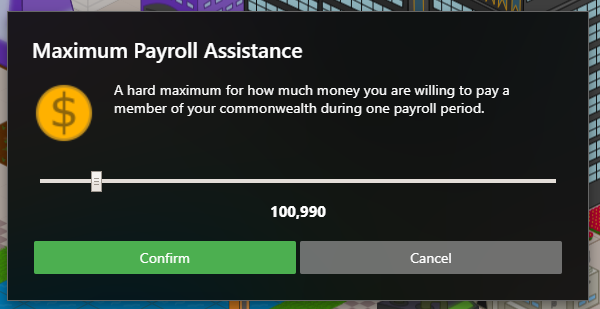 Using the slider, you can set the maximum amount of payroll that you will send to a child colony per pay period. The default is at $50,000 so if you want to pay more than that, you should change the setting as soon as you update. In addition, the max payout is now capped at $1,000,000. With these new changes, the concept of payroll assistance is retained, while largely eliminating massive abuse of the feature. For quicker access to labor and payroll settings, a new keyboard shortcut of Shift+P has been added to quickly bring up the payroll screen.

The University has has a slight buff, upping it's IQ output to 155.

Next, a new resource of Nanite has been added to the game, with related buildings and tech. Nanite is the new end-game resource for Humans, although I plan on massively pushing the end game out further for all civs over the coming months. Nanites are microscopic robots that will lead to miniaturization in the colony, allowing more efficient space usage, and more Nanite stuff will be added over the coming updates.

Here are all of the new structures added in this update:
In addition, Advanced Nanotechnology has been added as a new Human tech.

Finally, this update makes some game file changes, particularly to Region games, that need to be propagated to existing games before I can enable the Mass Transit update. The changes relate to keeping stats about available jobs and housing in each subcity, so that the Mass Transit engine can decide what city to allow workers to work in, where people can migrate to, etc. Mass Transit will probably be added in v1.5.0, so if at all possible try to open all of your subcities between now and then. I don't expect any issues to arise if you don't open them, but doing so will make Mass Transit work properly for your region.

As I mentioned before, the next update will be Crime Update - Part 2, but that part of it basically entails turning on the crime calculations. I do not expect this to cause a great issue to existing colonies, and the impact will be minor compared to the previous changes introduced in v1.0.0. In addition to crime, I plan on expanding the Nanite tech, and will probably add an additional end-game tech line to each civ. All throughout the year, I plan on pushing out the end-game for each civ with each update, adding new techs and structures.

So that's all for today's update. Hope you enjoyed it, thanks for playing My Colony, and stay tuned for more!
Posted by

also this update is simply awesome in many ways. Cheers!

Electrogamer1943
Administrator
Posts: 81
17
0
2y
#4
Bast, what you have done is truly outstanding in every way, you have made an amazing game that is completely interactive and the limitations are only that of yourself. and unfortunately not a lot of game devs can do that. ( and that’s with a whole team *cough cough sim city cough cough*) yet you have been able to do it all by yourself. i love everything you’ve done with the game, and your doing amazing. keep it up!
-Gazell
-Gazell