I am now putting the finishing touches on My Colony 2 v0.18.0 which should be hitting all platforms over the next couple of days. This update contains changes for modders, some new content, and a couple of QoL improvements that you might find helpful, so let's take a look at what's new! 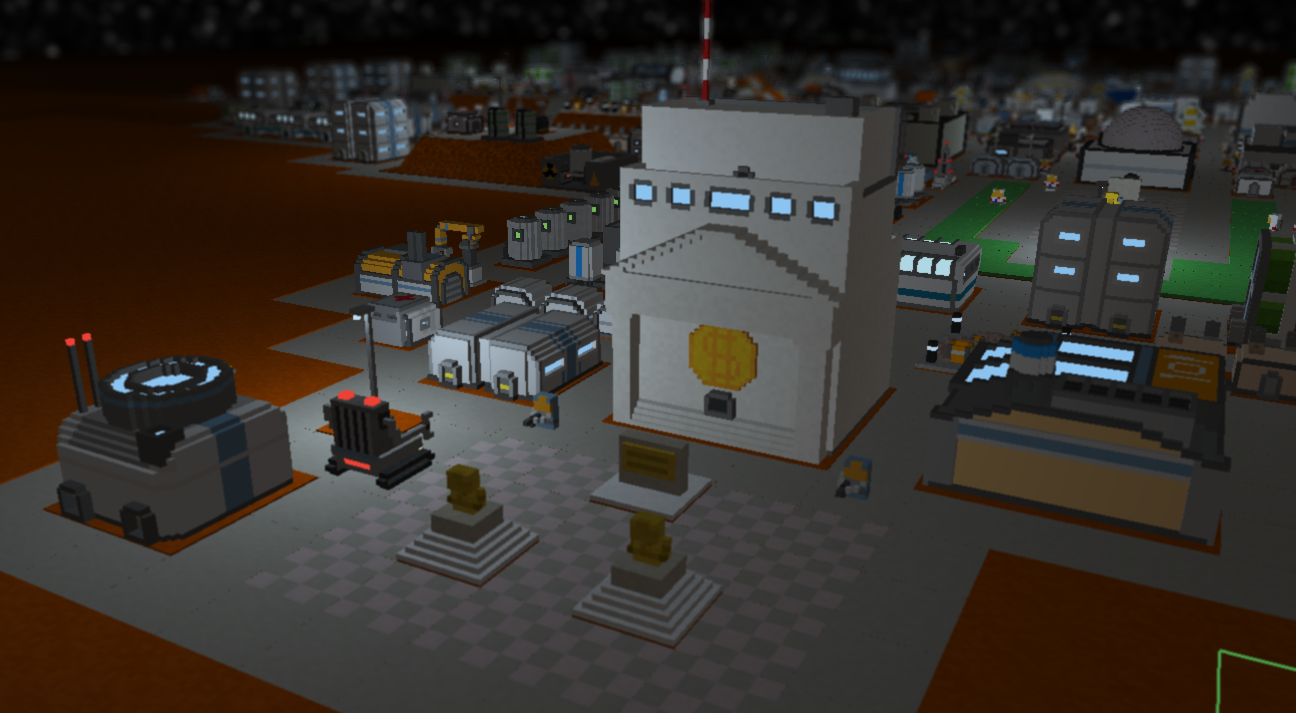 To get started, let's first take a look at the new content in this release. The My Colony 2 engine now has support for fixed-size, non-infinite maps, which you can see demonstrated with the new My Colony Classic map. With My Colony Classic, you will start out on a flat 160x160 Red Planet map which contains resource levels similar to the Red Planet map in My Colony 1. This map probably is not suitable for multiplayer, but it is suitable for those who want to switch gameplay up a bit and try something a bit closer in style to the original My Colony.

Moving along, two new research techs have been added in this update, Galactic Commerce and Multimedia Infrastructure. In addition to the new techs, there are four new structures available, the Ore Synthesis Lab, the Galactic Stock Exchange, the Multimedia Studio, and the Security Wall. 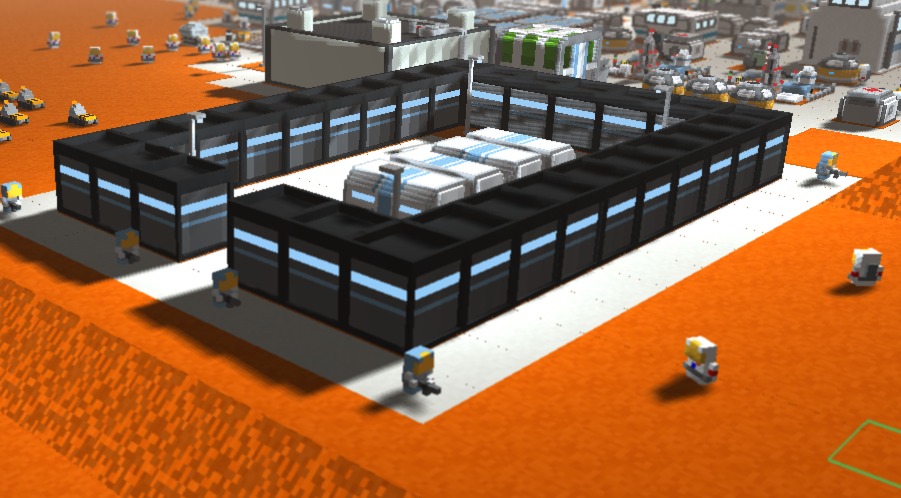 Next up, a handful of interface updates have been introduced in this release. Returning from My Colony 1, you can now do a click/hold gesture to bring up the box select feature, allowing you select multiple units at once. New in MC2, you can also just ctrl+click using a keyboard do use the box select feature.

Before this update, giving a group of units a move order at the same time would place all of them on the exact same location. They will now be slightly spread out if you are moving multiple units at once.

The Park Unit feature is now available for all units. You can now assign a unit a parking space that they will return to whenever they are done working. This is a great feature given the infinite map sizes, as you can now keep builder units in specific areas, and you can also have dedicated bot areas spread throughout your map so that you always have a builder nearby. 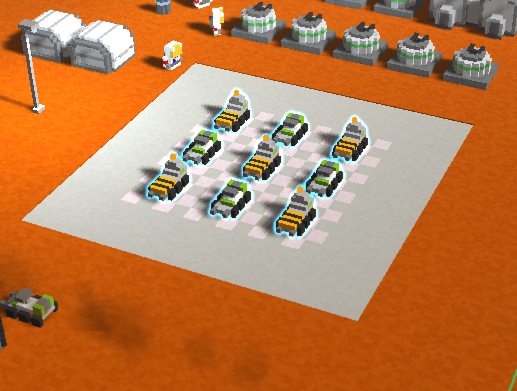 The Encyclopedia and Settlement Stats have been expanded slightly, although there is still a ton of work to be done. Settlements in particular will now show GDP statistics, but keep in mind that the GDP data will be a bit inaccurate for the first hour or so of play time, until the engine has enough data collected to put together a more accurate assessment of your settlement's economy.

If you use the Ape Apps Launcher and you have joined a multiplayer MC2 server, you will now receive a desktop notification when a server you have joined comes online, even if you do not have My Colony 2 open. This is handy for players who join a non-dedicated server and want to be alerted as soon as their server comes online.

Several bugs have been fixed in this release. Some of the more important involve an issue where playing a modded game would not load properly after the first play. Also, the structure placement "chain mode" toggle button has been fixed now.

I have made changes to the data structure for Units and Structures that any user creating game mods should be aware of going forward. Previously, Unit and Structure data objects had to specify what units/structures they were able to build, respectively. This has now been reversed, and Units must now specify where they are built, and Structures must specify which units build them. You can read more about the reasoning for this change in this thread, but this should make modded content better overall in the long run. Right now, both the old data structure and new data structure will be recognized by the engine, but do use the new way on all modded content going forward, as the old way is now considered to be depreciated and will no longer be maintained going forward.

It is now much easier for modders to export content bundles containing several new objects. Now when you are in the game editor and choose Export Bundle -> Object Bundle, you will be presented with a new export window that lets you select which data objects you want to add to the bundle. Prior to this, if you wanted a bundle with only certain objects in it, you would have to manually remove all unwanted objects from the game before export, which was very tedious. 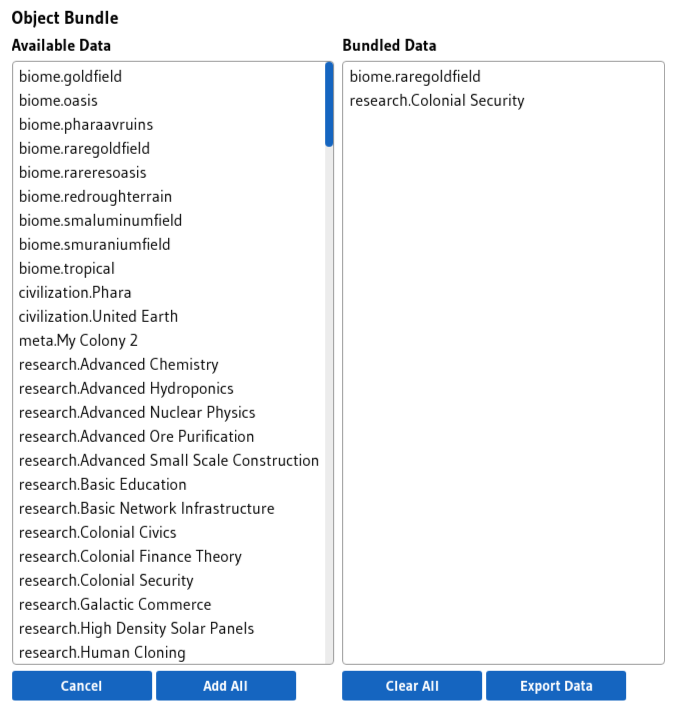 The game editor menu now also includes a Blank Slate option, which will remove all content from the editor and let you create a brand new game from scratch. Again, this is an extremely handy new feature, as you would previously have to manually remove all existing content if you were wanting to create a Total Conversion mod.

There are a handful of other little changes and updates you will find in this release, which I cannot remember off of the top of my head, but you can try them out right now on the Launcher or on Ape Web Apps, and they should be hitting the app stores over the coming days.

Looking ahead, over the next few weeks I am going to be putting together a Mod Shop website, where mod creators can upload their modded content, and in MC2 v0.19.0, the new Mod Shop will be browsable from within the game. Users will still be able to distribute their mods manually like they could before, but the benefits of the new Mod Shop will be:
A mod author will be able to publish updates to their mod on the website, which will be automatically distributed to the users who have the mod installed. Authors can also include screenshots, a description, a website link, and a button that will let users donate to them to thank the author for their time and effort. They will also be able to check usage statistics for their mod, and read user reviews and feedback.

Speaking of mods as well, right now mods can only be installed on new game creation. I will soon be adding a Mod section to the Statistics screen which will allow you to install/remove/update mods for a game after it's been created. Obviously you can bork your game by doing this, so make sure to save a backup of your game before changing it's content. There will be in-game warnings posted to that effect as well.

So anyway, that is what's new with My Colony 2! I hope you enjoy the update, and stay tuned for a whole lot more in the future!

colbya
Member
Posts: 1079
21
0
1mo
#3
Well Bast theres a Bug in 0.18.0 chrome ---- Parking the bot ---- build say 3 solar power cells or any other buildng of more then one at a time .
The bot will go build ONE of the placed buildngs GO back and Park then GO build the next Buildng and so one .
So park build ONE repark Build one repark Build one . so if your parking is far well lol .

RLMYTHICALLEGEND
Member
Posts: 19
4
0
30d
#7
I think Bast, the next update you should include a GUI for building stats like in MC1 where you click on a building and go into stats. Also, another thing everyone wants is a progress bar of production buildings, it is the only reason why people feel happy about a building producing resources. A few, probably known bugs you should fix is when a player tries to click on an ore (or other) deposit, it doesn't show how much you have. Everything else is good. Like the modding integration. Happy New Year.