Just in time for the weekend (if you are using the PWA at least), the My Colony 2 v0.23.0 update is now available, bringing a lot of goodies that I hope think you are going to love. So what's new in this release? Let's take a look! 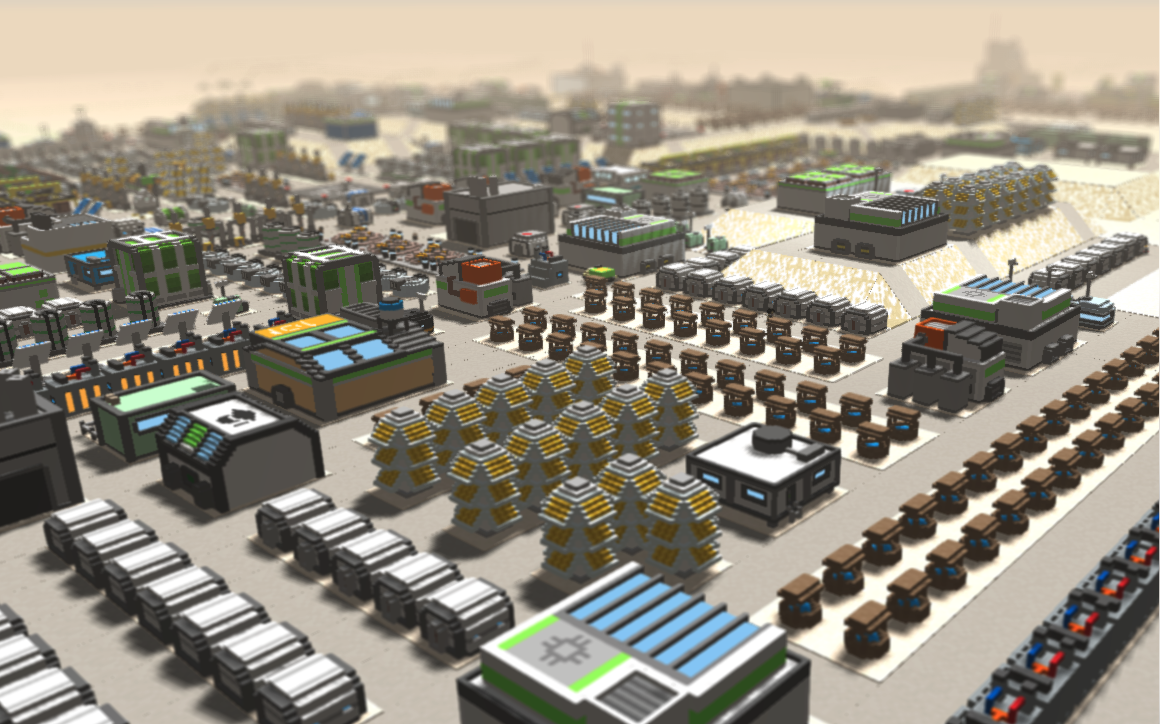 To begin with, continuing work from the last two releases of My Colony 2, more structure voxel models have been separated from the data files, further reducing initial game load times, particularly on mobile devices. This should especially help on lower memory devices, as some were crashing from the sheer size of the overall MC2 data file during initial load.

Next up, as I mentioned in another thread, all My Colony 2 game statistics are now being automatically logged to the Coloniae service that @Sobeirannovaocc is maintaining. The My Colony 2 implementation of Coloniae is still in development, but you can find it at the following URL to track it's progression. Check it out, see if you can find your own world statistics, and be sure to give Sobe your feedback!

In addition, all new colonies in MC2 are now being automatically added to the mc2global Universe, as outlined in this thread. This will be the default global universe for all new MC2 games, and if you want to join it with your existing colony, simply click on the thread I just posted for instructions.

Next up, commenters in the various app stores have long been requesting that MC2 contain some sort of hints or tutorials such as those found in the original My Colony. So I have started to add helpful dialogs to the game at various points. 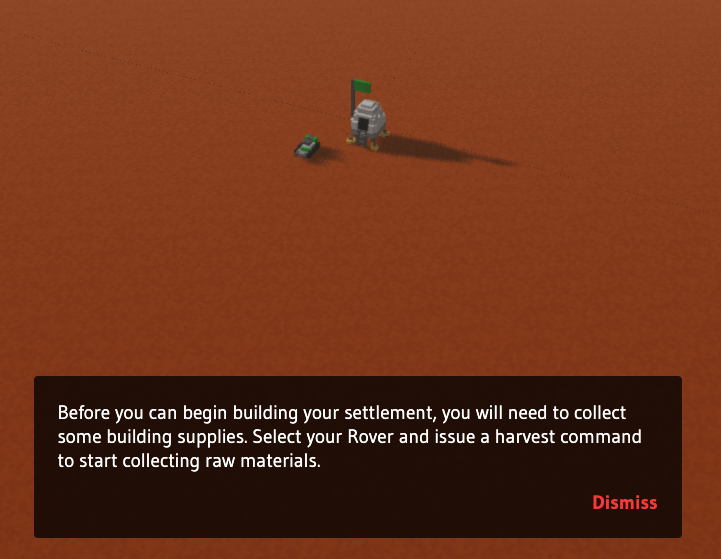 More exciting than the tutorials though, are the manner in which they have been implemented. Some time ago, there was a request for some scripting capabilities to be added to MC2 that creators could use for different types of mods. I started implementing it by adding some flag properties to units, structures, worlds, and civs, but then forgot about it, until @Luker124 recently reminded me that they would be helpful for a mod he is planning. As a result, you will now see a new Scripting section in the Game Editor. 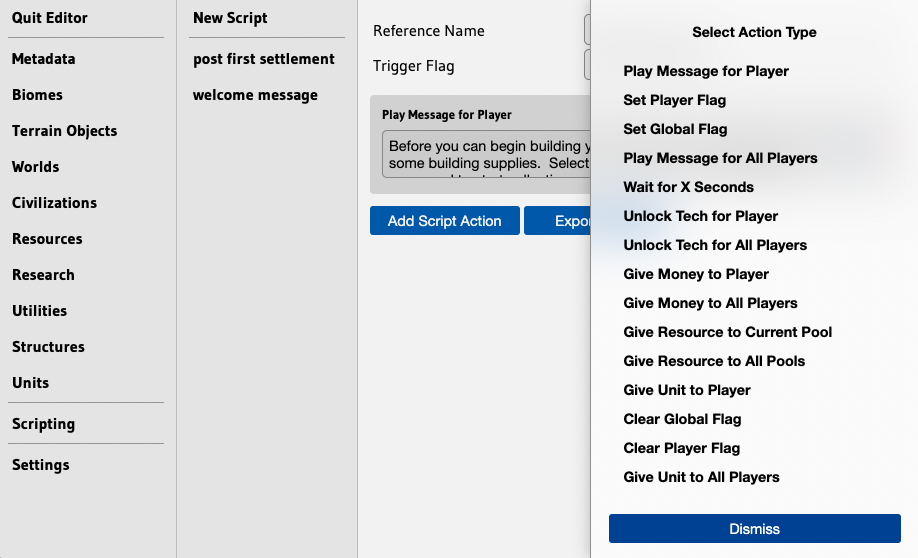 I will make a more detailed post on scripting at some point, but it basically works like this. Certain entities (units, structures mainly, but also civs and worlds) can set either a Player Flag or a Global Flag when they are built/come into the game. A Player Flag pertains to the player who triggered the event, and a Global Flag pertains to the entire server. When a flag is triggered, the engine looks through all of the available scripts, and then will run any script that is triggered by the trigger flag.

The engine remembers which players have used which flag, so they can only be triggered once, unless a script gives a "clear flag" command. You can see the currently available script actions in the screenshot above. A script may contain one or more actions, and can call subsequent scripts by setting flags itself.

I plan to use this new flag/script feature to implement something suggested by @GeneralWadaling some months ago, whereby you could discover interesting terrains which would then unlock things. My thinking is that you could discover alien artifacts/tech that would then unlock certain structures that were not available otherwise through the tech tree.

The possibilities are vast though, so it will be interesting to see what modders come up with. The scripting framework is still in its infancy, so try it out and let me know what additions or improvements you would like to see. I foresee eventually being able to make a wide variety of different types of mods with this feature, not even limited to colony builder games.

Next up we come to a new addition that everybody has been asking for since MC2 was first made public, and I am talking about the return of the Bulldozer!

There is now a new toolbar above the build options sidebar. Currently it only has a bulldozer, but that will probably be expanded at some point. As in MC1, the bulldozer mode will turn your interface red so that you do not forget you are in a destructive mode. Unlike MC1, bulldozing a structure will now actually sell it instead of just destroy, so that it is actually more like a quick-sell option than anything else.

Besides just structures, Roads can now finally be removed too, using the bulldozer. This has been one of the top requests for a long time, and now it is a reality. This actually required a pretty substantial rewrite to how roads work, which I outlined in another thread a few weeks ago. But the work is done and the feature is here now. In the coming updates, I plan on also allowing roads to be built pretty much anywhere, not just within the confines of your own settlement, allowing vast highways to be buily across your world!

Moving on, the engine will now enforce structures that have a Settlement Level requirement (currently, only a handful of structures do). You will see this when viewing structure costs on the sidebar. Settlements are leveled up using Civics, and you can level up your settlement by selecting it from the Statistics window.

Now on to new content, as three new Techs have been added in this update: Low Atmospheric Zoology, Advanced Security and Advanced Robotics! Along with the techs, we have two additional resources added to the mix, Cloth and Robots.

Of course, there are new structures here too. The Fish Hatchery is back from MC1, allowing you to breed fish for food. The Outhouse is here, which I think was something of a gag model that GeneralWadaling sent me, but I turned it into an early game sanitation (medical) facility that you can build early on, before you can afford an infirmary. Next we have the Synthetic Textile Lab for creating cloth, and the Robotics Factory for making robots. There is a decorative United Earth Flag that takes on the color of your settlement, and the Storage Yard is a new upgrade to the Raw Materials Depot, allowing you to store way more raw materials than you previously could. Finally, the new War Factory will allow you to build this updates' new military unit, the Main Battle Tank! 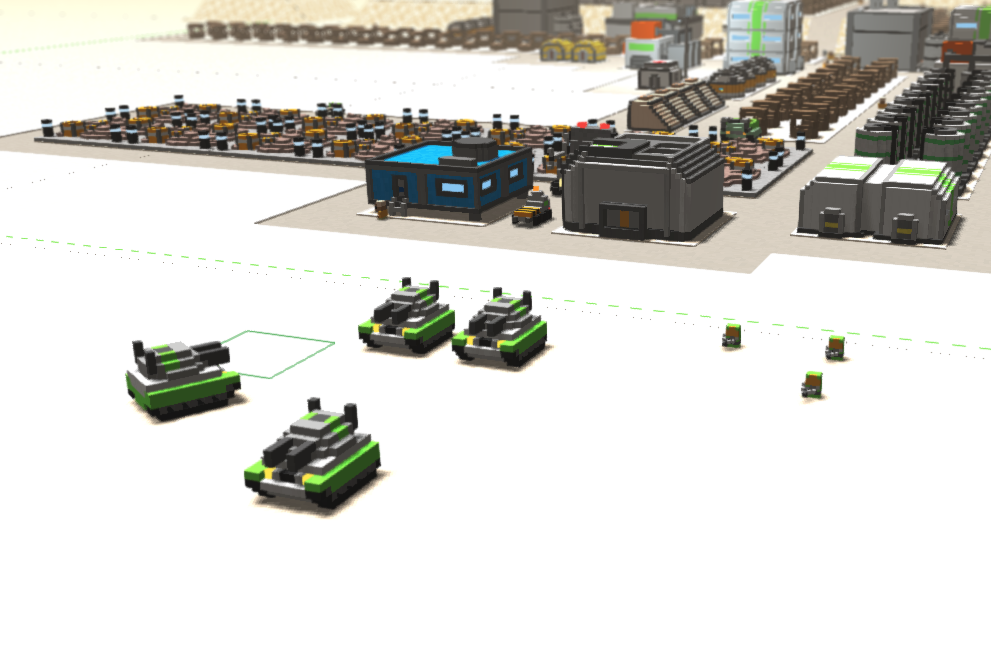 All in all, there is a lot here in this update, and I hope you guys like it! So check it out, as it should be hitting all platforms over the coming days, and if you don't want to wait, fire up the web app now at the following URL. Until then, thanks for playing, and have a good weekend!

Luker124
Member
Posts: 147
67
0
1mo
#2
Hey Bast, I've noticed that there is a lack of a sort of list for trigger flags, so if one could be compiled that would be amazing!
Great work on the update though! I'm happy to see tons of new content coming into the game so fast!
Join my Commonwealth! WAst4IOO : and join the NOZ discord: https://discord.gg/Vy6UZhhfA2
Owner of Komet Labs!

bastecklein
Developer
Posts: 2904
784
0
1mo
#3
Hey @Luker124 there are not predefined trigger flags in the game engine at the moment, they all need to be defined in the data models. I will make a post about the flag/script system at some point today.
Owner of Ape Apps, LLC

Architecture1134
Member
Posts: 121
3
0
1mo
#4
Thank you so much for the update, @bastecklein!
Best Regards, Architecture, King of Earth