bastecklein
Developer
Posts: 2953
870
0
4y
#1
The main new feature being added in My Colony v0.70.0 is for premium users, and is the new concept of Regions. Coming soon, when you create a new game (online or off), you will be asked if you want to start a single city, or a region. 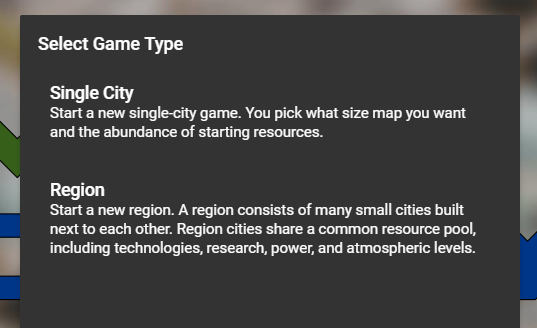 If you have ever played Sim City 4, then you kind of know the idea behind regions. Basically how it works, when you start a new region, you get a blank map that looks like a regular map, but instead of placing buildings, you can either place a Small City or a Medium City. You then start a new map using that size of city. When you go back to the region, a tiny little picture of your map is sitting in the plot of land you selected.

The idea is that the entire region shares a common resource, electricity, atmosphere, and technology pool. Also, the region declares independence as a whole. The region is 50x50 in size, so in theory you could have 2,500 small sized maps in a single region, although that would be crazy.

Either way, the support is somewhat experimental right now. It's been on the web version for a couple of days, but I do not suggest starting a region yet until the official release of 0.70.0, as you will likely have to start all over again from scratch. Many things have yet to be implemented, and that will happen in the coming days. I just wanted to let everyone know what it was, so nobody starts a new region yet expecting it to work properly!

If the regions turn out to be popular, I might also add moons and asteroids that are part of the same region system, but don't necessarily share the same resources, at least not electricity and atmosphere.

Anyway, somebody suggested something similar in the forums the other day, and I always loved the region aspect of Sim City 4, so that is sort of my guide here in implementing this, although SC4 did not share money between cities, I think it would be need to do so here.
Owner of Ape Apps, LLC

This might help My Colony out. This sounds really cool. Reminds me of TheoTown. Should check it out.

This might help My Colony out. This sounds really cool. Reminds me of TheoTown. Should check it out.

The idea on itself could help mycolony, but since it's only premium it will only make sure Premium players keep playing and even discourage non premium from playing. Sure you can say they should get premium if they want it, but that's not very fair.

cry8wolf9
Administrator
Posts: 1355
41
0
4y
#5
@bastecklein couple quick questions.
-will an already existing established map be able to be converted? or is there just no way to do it?
-you mentioned that the region has a max size will that at some point be expandable?
-also while on the region map do the smaller cities still run in the background?

-one more i noticed while testing it out a bit. for the charter you use to join can you specify that its a region? i saw the email and its still calling it a colony you should separate it so commonwealth leaders know that a whole region is joining you.
Questions?
Concerns?
Feeling lonely?
Feel free to get in touch with me via message or heading over to
https://discord.gg/tsBg6Ec

Wubman
Member
Posts: 164
0
0
4y
#6
This sounds like a great idea, reduces the amount the game has to process at once letting the game run faster. Albeit a small 50x50 city seems a little small for me.
A few questions to go along with crywolf:

-- Will you be able to make a new city at any time with no extra cost? Or would that now class as annexing land and cost civics to do. In which case, 50x50 doesn't seem big enough to get the civics needed to do that.

-- Will vehicles be able to travel freely between cities? Building a vehicle army in each city would be a little tedious.

-- Will Cities be allowed to be renamed or deleted at a later date?

Other than that I can't think of anything else off the top of my head. Excited for this one, hope it all goes well.
Hello! I am a High Wizard from the Nations of OZ, come check out our discord server! https://discord.gg/qqCswpF

bastecklein
Developer
Posts: 2953
870
0
4y
#7
Ok so a lot of this will get fleshed out as I get feedback from people who have played regions. So the entire region joins a commonwealth if you play online as the name of the region as a whole. All of the cities are basically sub-districts of the region.

There is no technical reason why the main region map size could not be expanded. I will think of some functionality to do that at some point. Really with a potential of having over two thousand sub-districts on the map, I do not see one being filled any time soon.

There are only limited parts of the non-active cities that still run while they are not open, mainly only things that are vital to the shared resource pool, such as electric generation. This is the main area that will need to be balanced out going forward after I can see better how everything works out. It would be very CPU and memory intensive to run everything in the background, so in some degree, most individual cities will need to provide some degree of self-sufficiency rather than just totally relying on the output of other cities. They should still be treated as individual colonies when you are building them out, just with the added benefit of the shared tech/atmosphere,resource pools.

There is no extra cost for adding more cities to your region. It is not necessarily an unfair advantage over old colonies which need to annex land, as the cities are still, for the most part, separate entities. So workers do not travel outside of their district to find jobs, so you can't really just have an all-housing district, or an all-trash district. On the other hand though, since resources and tech are shared, you COULD have some sort of suburban low-density housing district, with something like one Investment Bank serving a ton of small neighborhood housing units.

The vehicles are not shared, but if you already have a ton of resources built up from another city, it would be trivial to build one vehicle factory and a couple of turbo drones in a district, and get right to work. Although I am not opposed to adding a way to send vehicles or even people from one district to another.

There actually should be a district-district immigration method set up. If you think of the case where your parent colony puts your entire district under an immigration embargo, there is no reason people shouldn't be able to move from one city to the next. I will look into a way of doing that.

The individual cities can be renamed in the usual way, and I will add a way to remove them from the main Region map, probably just using the bulldozer tool.

I also at some point want to make the terrain features, such as rivers, connect from one city to the next, so that it all flows nice on the main map.

Anyway, the initial release of the Region function will be out pretty soon, so you can play with it and see what you think, see what needs changed. There are actually a lot of possibilities for it going forward. Once you start adding cities to the map, you see how huge it really is. Right now it is somewhat basic, but there are literally hundreds of new gameplay elements that can be added to it.
Owner of Ape Apps, LLC

also a couple of suggestions ...
Could we have changing terrain over the region map so we could have cities in desserts, forests, tundra, etc. ?
Could we have multiple civilisations attempt to colonise the same region (sharing atmosphere, but not power or other resources)?

There can probably be different terrains over a region, but i don't think completely different planet types. I guess the terrain options would need to depend on the planet type selected.

Multiple civs, maybe. Eventually I might make it so only cities that are directly touching each other share power/resources.
Owner of Ape Apps, LLC

Wubman
Member
Posts: 164
0
0
4y
#10
Having each city being self sufficient simply isn't viable. Between the sheer size of the optimum efficiency layouts and the scale of resources they need to sustain them. It's simply not practical to have everything on the one map without making it too big, which defeats the purpose of having several small maps instead of one big map.

Take the Centre for artificial learning for instance, it would require a robots layout (which on its own takes a quarter of a small city map) and an alien microchip layout. The Robot layout also needs more microchips, and also aluminum. Aluminum generation means I now need to bring in the centre for relic studies layout (which my layout doesn't fit on a single small map length ways, although it can be modified), and then in order to even use workers in the relic studies you need to then make room for schools.

All of that space used to make a few layouts of what you originally wanted and then have to make another city doing the same even though you still have excess resources. Not trying to be a negative nancy here I just don't see having each district self sufficient as being a viable option in the late game.
Hello! I am a High Wizard from the Nations of OZ, come check out our discord server! https://discord.gg/qqCswpF